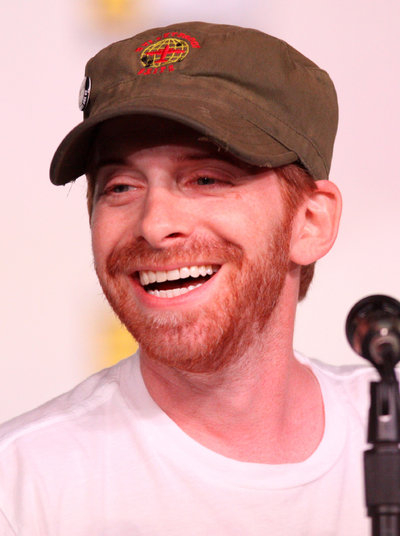 Seth Benjamin Green (born Seth Benjamin Gesshel-Green; February 8, 1974) is an American actor, comedian, voice actor, television producer, television director and screenwriter. Green is the creator and executive producer and most-frequent voice on Adult Swim's Robot Chicken, where he is also a writer and director. He directed many of the Robot Chicken specials including Robot Chicken: Star Wars and DC Comics Special. He has starred in the feature films, Airborne, The Italian Job,Party Monster, Can't Hardly Wait, Without a Paddle and all three Austin Powers films, among many others. He is also well known for his role as Chris Griffin on Fox's Family Guy and previously as Daniel "Oz" Osbourne in Buffy the Vampire Slayer, and Greg the Bunny. He also voices Lieutenant Gibbs in Titan Maximum and Jeff "Joker" Moreau in the Mass Effect video game series. Green has appeared in many other movies, such as Rat Race, America's Sweethearts, Old Dogs and as a child in Woody Allen's Radio Days, and in the horror films Idle Hands and Stephen King's It.

Green was born in Overbrook Park, Philadelphia, Pennsylvania. His mother, Barbara, is an artist and his father, Herbert Green, is a math teacher. Green has one sibling, an older sister, Kaela. His family is Jewish. He started acting from the age of 6.

Green's first movie roles were in the 1984 films Billions for Boris and The Hotel New Hampshire, the latter of which cast him alongside Jodie Foster and Rob Lowe. He appeared in the 1987 film Can't Buy Me Love, playing the part of Patrick Dempsey's character's little brother, Chuckie Miller. He also starred in Woody Allen's Radio Days (1987) as Joe, a 1940s boy, and appeared in Big Business (1988) and, in the same year, in My Stepmother Is an Alien, which also starred Buffy the Vampire Slayer co-star Alyson Hannigan.

In 1991 Green rose to fame in a Rally's "Cha Ching" commercial, which earned him an appearance at the 1991 Super Bowl. Green was given a key to New Orleans in honor of his role in the popular commercial.

After getting engaged on New Year's Eve 2009, Green married actress Clare Grant on May 1, 2010 in Northern California. The couple currently lives in Los Angeles. They worked together on Robot Chicken, Warren the Ape, and her "Geek and Gamer Girls Song" viral video.