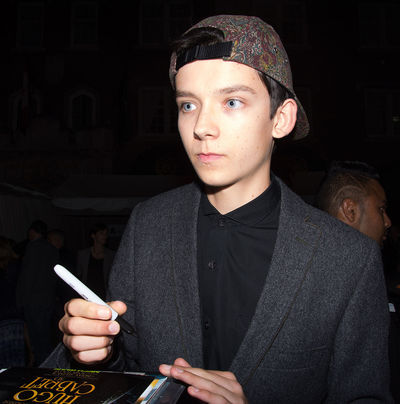 Asa Maxwell Thornton Farr Butterfield (born 1 April 1997) is an English actor. He began his acting career at the age of 9 in the television drama After Thomas (2006) and the comedy film Son of Rambow (2007). He became known for playing the main character Bruno in the Holocaust film The Boy in the Striped Pyjamas (2008), for which he received nominations for the British Independent Film Award and the London Film Critics Circle Award for Young British Performer of the Year at the age of 11. He also played the young Mordred in the hit BBC TV Series Merlin (2008-2009) and Norman in the fantasy film Nanny McPhee and the Big Bang (2010).

For his leading performance as Hugo Cabret in Martin Scorsese's fantasy Hugo (2011) Butterfield received considerable praise and was awarded the Young Hollywood Award for Breakthrough Performance - Male and was nominated for the Critics' Choice Movie Award for Best Young Performer and the Empire Award for Best Male Newcomer, among other accolades. He is also known for portraying Ender Wiggin in the 2013 film adaptation of the science fiction novel Ender's Game by Orson Scott Card. He was nominated for a British Independent Film Award for Best Actor for playing Nathan Ellis in Morgan Matthews's X+Y (2014) and will play the leading roles of Jacob Portman and Elliot Gardner in the upcoming 2016 films Miss Peregrine's Home for Peculiar Children and The Space Between Us, respectively.

Butterfield was born in Islington, London, and is the son of Jacqueline Farr and Sam Butterfield. He was born with the middle names "Maxwell Thornton", but now uses the middle name "Bopp" on his passport instead (after Comet Hale–Bopp).

Butterfield first started acting at the age of 7 on Friday afternoons after school at the Young Actors' Theatre Islington. Later, he secured minor roles in the 2006 television drama After Thomas and the 2007 film, Son of Rambow. In 2008 he had a guest role playing Donny in Ashes to Ashes.

In that same year, aged 10, he played the lead role in The Boy in the Striped Pyjamas. Director Mark Herman said that they came across Butterfield early on in the audition process. He was on the first audition tape he received and he was the third hopeful he met in person. Herman thought Butterfield's performance was outstanding, but only decided to cast him after auditioning hundreds of other boys, "so no stone was left unturned".

Producer David Heyman and director Mark Herman were looking for someone who was able to portray the main character's innocence, so they asked each of the children what they knew about the Holocaust. Butterfield's knowledge was slim and it was purposely kept that way throughout filming so it would be easier for him to convey his character's innocence. The final scenes of the film were shot at the end of the production period to prepare both him and Jack Scanlon for the dramatic ending of the film. He beat hundreds of boys to the role and also successfully passed the auditions for a role in Mr. Nobody for which he auditioned at the same time. He elected not to pursue the latter role.

In 2008, Butterfield appeared in the Merlin episode "The Beginning of the End"; he played a young druid boy sentenced to death by Uther Pendragon because he feels threatened by the boy's magic. Despite the Great Dragon's advice and the warning that Arthur cannot survive if the boy does, Merlin and Arthur, with the help of Morgana, help the boy escape to rejoin the Druids. When they are about to disappear into the forest, Arthur asks him for his name, which he says is Mordred, an important character from the Arthurian legends who is supposed to kill King Arthur. Butterfield appeared as Mordred in a number of subsequent episodes; however the role was recast, with Alexander Vlahos playing Mordred as an adult character.

In 2010, he had a small part in The Wolfman. He starred as Norman Green at the age of 12 in Nanny McPhee and the Big Bang (2010), working together with Emma Thompson. The film, and his performance, both received positive reviews. At the age of 13 he played the main and title character in Martin Scorsese's Hugo, adapted from the novel The Invention of Hugo Cabret. Hugo was filmed from June 2010 to January 2011, it was released on 23 November 2011, and achieved critical and box-office success.

Butterfield played the title role of Andrew "Ender" Wiggin in the film adaptation of the Orson Scott Card novel Ender's Game, along with Hailee Steinfeld, Abigail Breslin, and Harrison Ford which completed filming in the first half of 2012, and was released in 2013. After the shooting of Ender's Game, Butterfield was immediately cast in coming of age British drama, X+Y  as Nathan Ellis, a mathematical savant on the autistic spectrum selected to compete with other gifted children on a United Kingdom team in an internationally renowned mathematics competition. The film premiered on 5 September 2014 at the Toronto International Film Festival and was released in UK cinemas on 13 March 2015. Butterfield's performance received widespread critical acclaim, and saw him nominated for the BIFA Award for Best Actor.

Later in 2013, Butterfield was reported to be in talks for a role in King of Kastle and in May, he was cast in The White Circus with his fellow cast member from Hugo, Chloë Grace Moretz. In early 2014, Butterfield was cast in a film adaptation of Ten Thousand Saints. Shooting began on 27 January 2014 and the film was released on 14 August 2015.

He was then cast in two lead roles, as Jacob Portman in Miss Peregrine's Home for Peculiar Children, based on the novel of the same name, alongside Eva Green and as Gardner in The Space Between Us. Both films are scheduled for release in 2016.

Butterfield enjoys making and producing music, and released a mashup of the songs "Teenage Dirtbag" by Wheatus and "Making Plans For Nigel" by XTC in 2004. In late 2012, Butterfield co-designed a turn-based video game for iPad with his father and brother called Racing Blind. The game was released to the App Store on 7 April 2013.

Butterfield was nominated in the category "Most Promising Newcomer" of the 2008 British Independent Film Awards, but he lost the award to Dev Patel from Slumdog Millionaire. He was nominated for the NSPCC Award (Young British Performer of the Year) in the London Critics Circle Film Awards, which was ultimately won by Thomas Turgoose for his roles in Eden Lake and Somers Town. MTV Networks' NextMovie.com named him one of the Breakout Stars to Watch for in 2011.