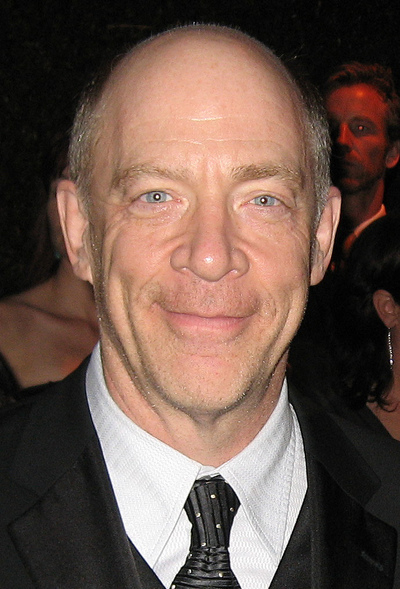 Jonathan Kimble "J. K."Simmons (born January 9, 1955) is an American actor. He is best known for his roles on television as Dr. Emil Skoda in NBC's Law & Order (and other shows in the Law & Order franchise), Assistant Police Chief Will Pope in TNT's The Closer, neo-Nazi Vernon Schillinger in the HBO prison drama Oz; on film as J. Jonah Jameson in Sam Raimi's Spider-Man trilogy, and in video games as Cave Johnson in Portal 2.

Simmons was born in Detroit, Michigan, the son of Patricia (née Kimble), an administrator, and Donald William Simmons, a college professor. He has a brother, David (a singer-songwriter), and a sister, Elizabeth. He was raised in Columbus, Ohio and Missoula, Montana, and attended the University of Montana. Simmons was a member of the Seattle Repertory Theatre.

Simmons is known for his television roles as Dr. Emil Skoda, a police psychiatrist, who has appeared on three of the four incarnations of Law & Order and New York Undercover, and as sadistic neo-Nazi inmate Vernon Schillinger on the prison drama Oz. He also stars as Ralph Earnhardt, the father of race-car driver Dale Earnhardt, in 3: The Dale Earnhardt Story. He played B.R. in the film Thank You For Smoking and has been praised for his performance in Juno as "Mac" McGuff, the title character's father. He played Will Pope, Assistant Chief of the LAPD, in The Closer.

Simmons also played J. Jonah Jameson in all three of Sam Raimi's Spider-Man films and the expanded video game adaptation of Spider-Man 3. He provided his voice for two newspaper editors in two episodes of the eighteenth season of The Simpsons. The characters are never named, but are obviously meant to emulate the character of Jameson (one, bearing Jameson's appearance, even demands "pictures of Spider-Man", then on being reminded he works at a poetry journal, demands "poems about Spider-Man"). Similarly, Simmons voiced an editor-in-chief of a newspaper (with Jameson's appearance and mannerisms) for a 2013 episode of The Hub's Pound Puppies.

Simmons is known for starring in films that are produced or directed by his friend Jason Reitman, including Thank You for Smoking, Juno, Up in the Air, and Jennifer's Body. He also lent his voice to Reitman's film Young Adult, voicing the protagonist's boss through a series of voicemails. In 2013, he had a small role as Mr. Jervis in Reitman's film Labor Day. He voices Tenzin, an Airbending master and the son of Aang and Katara, in the 2012 Nickelodeon series The Legend of Korra.

In 1996, Simmons married Michelle Schumacher, with whom he has three children. His brother, David, is a singer-songwriter, and his sister, Elizabeth, is a professor at the University of Washington.