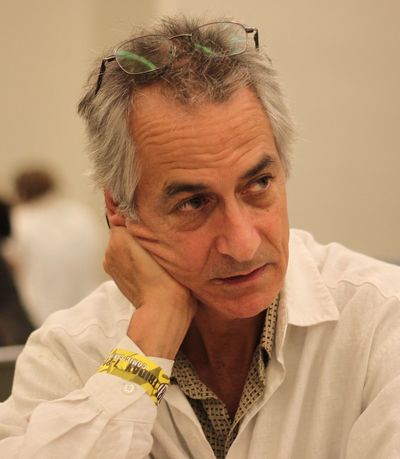 Strathairn came to prominence in the 1980s and the 1990s performing in the films of his college classmate John Sayles, including Return of the Secaucus 7 (his screen debut), The Brother from Another Planet, Matewan, City of Hope, Eight Men Out, and Limbo. Strathairn was nominated for an Academy Award for Best Actor for portraying journalist Edward R. Murrow in Good Night, and Good Luck (2005). He is also recognized for his role as CIA Deputy Director Noah Vosen in the 2007 film The Bourne Ultimatum, a role he reprised in 2012's The Bourne Legacy. He played a prominent role as Dr. Lee Rosen on the Syfy series Alphas from 2011 to 2012 and played Secretary of State William Henry Seward in Steven Spielberg's Lincoln (2012). He won an Emmy and was nominated for a Golden Globe for his role in the TV film Temple Grandin (2010).

Strathairn was born in San Francisco, California, the second of three children of Thomas Scott Strathairn, Jr., a physician, and Mary Frances (née Frazier), a nurse. He is of Scottish descent through his paternal grandfather, Thomas Scott Strathairn, a native of Crieff, and of Native Hawaiian ancestry through his paternal grandmother, Josephine Lei Victoria Alana. Strathairn attended Redwood High School in Larkspur, California, and graduated from Williams College in Williamstown, Massachusetts, in 1970. At Williams he met fellow actor Gordon Clapp and director John Sayles, all of whom have collaborated on many projects.

He studied clowning at the Ringling Brothers and Barnum & Bailey Clown College in Venice, Florida, and briefly worked as a clown in a traveling circus.

Other notable film roles include his portrayals of the title character in Harrison's Flowers (2000); Col. Craig Harrington in Memphis Belle (1990); Whistler, the wisecracking blind techie in Sneakers (1992); convict Ray McDeere in the legal thriller The Firm (1993); Joe St. George in Dolores Claiborne (1995); Pierce Patchett, a millionaire involved in the seedy side of 1950s Los Angeles in L.A. Confidential (1997); Theseus, Duke of Athens, in the 1999 version of A Midsummer Night's Dream; and baseball player Eddie Cicotte in Eight Men Out (1988).

Strathairn is a character actor, appearing in supporting roles in many independent and Hollywood films. In this capacity, he has co-starred in Twisted as a psychiatrist; in The River Wild as a husband; in Blue Car as a teacher.

He has worked with his Williams College classmate and director John Sayles. He made his film debut in Return of the Secaucus 7, and worked in the films Passion Fish, Matewan, Limbo and City of Hope, for which he won the Independent Spirit Award. Alongside Sayles, he played one of the "men in black" in the 1983 film The Brother from Another Planet. Strathairn created the role of Edwin Booth with Maryann Plunkett in a workshop production of Booth! A House Divided, by W. Stuart McDowell, at The Players in New York.

Strathairn's television work also includes a wide range of roles: Moss, the bookselling nebbish on the critically acclaimed The Days and Nights of Molly Dodd; Captain Keller, the father of Helen Keller in the 2000 remake of The Miracle Worker; Capt. Frederick Benteen, a U.S. 7th Cavalry officer under General Custer's command in Son of the Morning Star; and a far-out (both figuratively and literally) televangelist in Paradise, the pilot episode for a TV series on Showtime that was not successful. Strathairn had a recurring role on the hit television drama The Sopranos. Strathairn starred in the second-season episode, "Out Where the Buses Don't Run", in Miami Vice.

Strathairn appeared in We Are Marshall, a 2006 film about the rebirth of Marshall University's football program after the 1970 plane crash that killed most of the team's members; and Cold Souls, starring Paul Giamatti as a fictionalised version of himself, who enlists a company's services to deep freeze his soul, directed by Sophie Barthes. In 2006 he did a campaign ad for then congressional candidate (now Senator) Kirsten Gillibrand. He reprised his role as Edward R. Murrow in a speech similar to the one from Good Night, and Good Luck, but was altered to reference Gillibrand's opponent John Sweeney.

Strathairn plays the lead role in the 2007 independent film, Steel Toes, a film by David Gow (writer/co-director/producer) and Mark Adam (co-director/DOP/editor). The film is based on Gow's stage play Cherry Docs, in which Strathairn starred for its American premiere at the Wilma Theatre in Philadelphia.

He played a role in Paramount Pictures' children's film The Spiderwick Chronicles (2008) as Arthur Spiderwick. Strathairn appeared in the American Experience PBS anthology series documentary, The Trials of J. Robert Oppenheimer, a biography of the physicist. He first played Oppenheimer in the 1989 CBS TV movie Day One. He plays William Flynn, an FBI agent dealing with anarchism in 1920s New York City, in No God, No Master.

In 2009, Strathairn performed in The People Speak, a documentary feature film that uses dramatic and musical performances of the letters, diaries, and speeches of everyday Americans. It was adapted from the historian Howard Zinn's A People's History of the United States.

He starred as Dr. Lee Rosen on Syfy's series Alphas.

In 2018, Strathairn appeared on the third season of SyFy's The Expanse as Klaes Ashford.

Strathairn is also a stage actor and has performed over 30 theatrical roles. He performed several roles in stage plays by Harold Pinter. He played Stanley in two consecutive New York Classic Stage Company (CSC) productions of Pinter's 1957 play The Birthday Party, directed by Carey Perloff (since 1992 artistic director of the American Conservatory Theatre), in 1988 and 1989; the dual roles of prison Officer and Prisoner in Pinter's 1989 play Mountain Language (in a double bill with the second CSC Rep production of The Birthday Party); Edwin Booth in a workshop production by W. Stuart McDowell at The Players in 1989; Kerner, in Tom Stoppard's Hapgood (1994); and Devlin, opposite Lindsay Duncan's Rebecca, in Pinter's 1996 two-hander Ashes to Ashes in the 1999 New York premiere by the Roundabout Theatre Company.

In 2015 Strathairn appeared in Anton Chekov's The Cherry Orchard with Mary McDonnell at People's Light theater in Malvern, Pennsylvania.

Strathairn narrated a biographical video to introduce Barack Obama before his acceptance speech at the 2008 Democratic National Convention.

He is married to Logan Goodman, a nurse, and lives near Poughkeepsie, New York. One of their sons, Tay, was the keyboard player for the band Dawes. Strathairn serves on the Rosendale Theatre Collective's Board of Advisors.