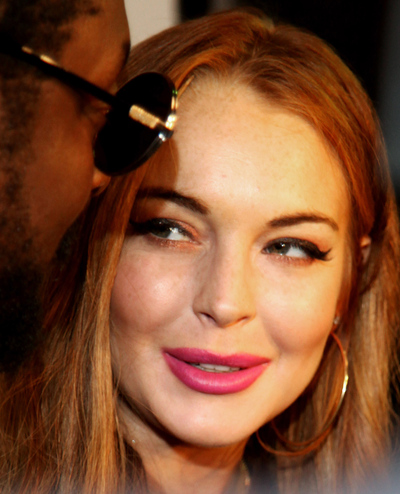 Lindsay Morgan Lohan (born Lindsay Dee Lohan; July 2, 1986) is an American actress, model and recording artist. She began her career as a child fashion model when she was three, and was later featured on the soap opera Another World for a year when she was 10. At age 11, Lohan made her motion picture debut in Disney's remake of The Parent Trap (1998), a critical and commercial hit. Her next motion picture, Disney's remake of Freaky Friday (2003), was also a success at the box office and with critics. With the release of Mean Girls (2004), another critical and commercial success, Lohan became a household name and a frequent focus of paparazzi and tabloids. The two films earned her several MTV Movie Awards and Teen Choice Awards.

Lohan's debut studio album, Speak (2004), was certified platinum. Her second album, A Little More Personal (Raw) (2005), was certified gold. Earlier in 2005, Lohan starred in Disney's Herbie: Fully Loaded, another box office success. In 2006, she received positive comments on her work in independent films, including Robert Altman's A Prairie Home Companion and Emilio Estevez's Bobby. In 2007, two driving under the influence incidents led to Lohan being put on probation, and together with three visits to rehabilitation facilities caused the loss of several movie deals.

In 2008 and 2009, Lohan worked as a fashion model and launched the clothing line 6126. She resumed her acting career with recurring appearances in the TV series Ugly Betty in 2008 and starred in the TV film Labor Pains in 2009. She was featured in Robert Rodriguez's feature film Machete (2010). She spent much of 2010 and 2011 entangled in legal problems stemming from probation violations and a necklace theft. After her supervised probation was lifted in 2012, she did further television work, including starring as Elizabeth Taylor in the biographical TV film Liz & Dick (2012).

Lindsay Dee Lohan was born on July 2, 1986 in New York City, and grew up in Merrick and Cold Spring Harbor on Long Island, New York. She is the eldest child of Dina Lohan (born Donata Melina Nicolette Sullivan) and Michael Douglas Lohan, Sr. Lindsay has three younger siblings, all of whom have been models or actors: Michael Jr. (who appeared with Lindsay in The Parent Trap), Aliana "Ali", and Dakota "Cody", the youngest Lohan child. Both of Lohan's parents are of Irish and Italian descent; she was raised as a Catholic. Some of her maternal antecedents were "well known Irish Catholic stalwarts" and her great-grandfather, John L. Sullivan, was a co-founder of the Pro-life Party in Long Island. Lohan attended Cold Spring Harbor High School, where she did well in science and mathematics, until grade 11, when she started homeschooling.

Lohan's parents have a turbulent history. They married in 1985, separated when she was three, and later reunited. They separated again in 2005 and finalized their divorce in 2007. Her father, Michael, is a former Wall Street trader who has been in trouble with the law on several occasions, while her mother, Dina, is a former singer and dancer.

Early career and The Parent Trap

Lohan began her career as a child model with Ford Models at the age of three. She modeled for Calvin Klein Kids and Abercrombie kids, and appeared in over 60 television commercials for brands like Pizza Hut and Wendy's, as well as a Jell-O spot with Bill Cosby. By the age of 10, when Lohan played Alexandra "Alli" Fowler in the television soap opera Another World, Soap Opera Magazine said she was already considered a show-business veteran.

Lohan remained in the role for a year, before leaving to star in Disney's 1998 family comedy The Parent Trap, a remake of the 1961 movie. She played dual roles of estranged twins who try to reunite their long-divorced parents, played by Dennis Quaid and Natasha Richardson. The film earned $92 million worldwide, and received largely positive reviews. Critic Kenneth Turan called Lohan "the soul of this film as much as Hayley Mills was of the original", going on to say that "she is more adept than her predecessor at creating two distinct personalities". The film won Lohan a Young Artist Award for best performance in a feature film as well as a three-film contract with Disney.

In the 2003 remake of Disney's family comedy Freaky Friday, Lohan stars alongside Jamie Lee Curtis as mother and daughter who switch bodies and have to take on each other's roles. At Lohan's initiative, her character was rewritten and changed from a Goth style to be more relatable. Critic Roger Ebert wrote that Lohan "has that Jodie Foster sort of seriousness and intent focus beneath her teenage persona." Freaky Friday earned Lohan the award for Breakthrough Performance at the 2004 MTV Movie Awards and, as of 2012, it remains her most commercially successful film, earning $160 million worldwide as well as an 88 percent approval rating on Rotten Tomatoes.

In 2004, Lohan had two lead roles. The first film, Disney's teen comedy Confessions of a Teenage Drama Queen, earned a domestic box office total of $29 million, with Brandon Gray of Box Office Mojo commenting that it was "well above expectations as it was strictly for young girls." But the film did not meet with critical acclaim. Robert K. Elder of Chicago Tribune wrote that, "though still a promising star, Lohan will have to do a little penance before she's forgiven for Confessions."

Her second lead role in 2004 in the teen comedy Mean Girls marked Lohan's first movie independent of Disney. Based in part on the non-fiction book Queen Bees and Wannabes, the film stars Lohan as a previously homeschooled 16-year-old learning to navigate the social cliques of a public high school. It was a critical and commercial success, grossing $129 million worldwide and, according to Brandon Gray, "cementing her status as the new teen movie queen." Mick LaSalle from the San Francisco Chronicle wrote that "Lohan is sensitive and appealing, a solid locus for audience sympathy." David Rooney from Variety said that "Lohan displays plenty of charm, verve and deft comic timing". Lohan received four awards at the 2004 Teen Choice Awards for Freaky Friday and Mean Girls, including Breakout Movie Star. Mean Girls also earned her two awards at the 2005 MTV Movie Awards. With Mean Girls, Lohan's public profile was raised significantly.Vanity Fair described how she became a household name. Paparazzi began following her and her love life and partying became frequent targets of gossip sites and the tabloid media. Following Mean Girls, which was scripted by Tina Fey and featured several alumni of Saturday Night Live, Lohan hosted the show three times between 2004 and 2006. In 2004, when Lohan was 17, she became the youngest host of the MTV Movie Awards and in 2006 she hosted the 2006 World Music Awards.

Aiming to become a triple threat – actor, singer and dancer, similar to Ann-Margret and Marilyn Monroe — Lohan began showcasing her singing through her film work. For the Freaky Friday soundtrack, she sang the closing theme, "Ultimate," and she also contributed songs to the Confessions of a Teenage Drama Queen soundtrack. Producer Emilio Estefan, Jr. signed Lohan to a five-album production deal in 2002. Two years later, she signed a recording contract with Casablanca Records, headed by Tommy Mottola. Speak, Lohan's début album, was released in December 2004, peaking at number four on the Billboard 200 and earning Platinum certification by early 2005. Primarily a pop/rock album, she co-wrote several of the songs. It was praised by Linda McGee of RTÉ, who awarded it 4 out of 5 stars and commented that "Speak opens with all the raw emotion and teenage angst that you'd expect from an artist of Lohan's age," as well as comparing the album to the music of Avril Lavigne. Allmusic, however, awarded it 2 out of 5 stars and said the album "feels more like a byproduct of an overdriven, overamplified celebrity culture than an actual album." Speak was introduced with the single "Rumors," which details Lohan's issues with gossip and paparazzi, and which eventually earned a Gold certification in the United States.

Lohan appeared in the January/February 2012 issue of pornographic magazine Playboy, in a shoot inspired by a nude pictorial of Marilyn Monroe from the first issue of the magazine. Editor Hugh Hefner said Lohan's issue was "breaking sales records."

Lohan dated DJ Samantha Ronson in 2008 and 2009. She co-hosted club events with Ronson and accompanied her when she was DJ-ing. Speaking about her sexual orientation, Lohan has said she is not a lesbian. When asked if she is bisexual in 2008, she responded "Maybe. Yeah", adding "I don't want to classify myself." However, in a 2013 interview with Piers Morgan when asked "So you're probably straight?", she said, "No, I know I’m straight. I have made out with girls before, and I had a relationship with a girl. But I think I needed to experience that and I think I was looking for something different." In April 2009, following her breakup with Ronson, Lohan appeared in a dating video spoof on the comedy website Funny or Die. It was viewed 2.7 million times in the first week and received favorable comments from the media.