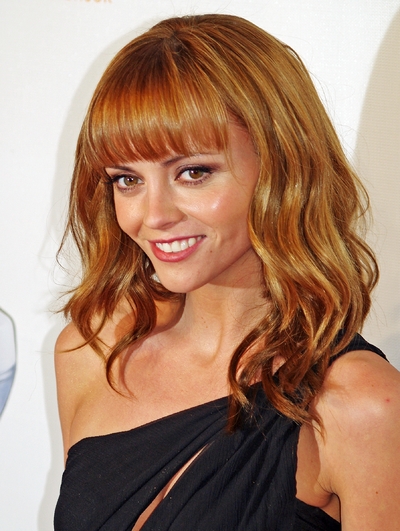 Christina Ricci (born February 12, 1980) is an American actress. Ricci received initial recognition and praise as a child star for her performance as Wednesday Addams in The Addams Family (1991) and Addams Family Values (1993), and her role as Kat Harvey in Casper (1995). Ricci made a transition into more adult-oriented roles with The Ice Storm (1997), followed by an acclaimed performance in Buffalo '66(1998) and then The Opposite of Sex (1998), for which she received a Golden Globe nomination for Best Actress. She continued her success with well-received performances in Sleepy Hollow (1999), Monster (2003), Penelope (2006) and Black Snake Moan (2007). In 2006 Ricci was nominated for an Emmy award for her role as a paramedic in the ABC drama Grey's Anatomy. In 2011–12 she played Maggie Ryan in the television show Pan Am.

Ricci was born in Santa Monica, California, the fourth and youngest child of Sarah (née Murdoch), a former Ford Model and real estate agent, and Ralph Ricci, a lawyer and a group therapist. Regarding her ancestry, Ricci has stated, "The Italian blood has been bred out of me. There's an Italian four or five generations back who married an Irish woman and they all [sic] had sons. So they married more Irish women, there were more sons, and more Irish women. Now I'm basically Scots-Irish."

The family moved to Montclair, New Jersey, where she grew up attending Edgemont Elementary School, Glenfield Middle School, and Montclair High School as well as the Morristown-Beard School. After one year, she left the high school for the Professional Children's School in New York City. Her siblings are Rafael (born 1971), Dante (born 1974), and Pia (born 1976). Ricci's parents separated in 1993 when she was 13 and she has not spoken to her father since.

A critic for the Bergen Record discovered Ricci at age eight in a school play (The Twelve Days of Christmas) at Edgemont School in Montclair, New Jersey. Another child was originally cast in the role, but Ricci got him to hit her and told on him; he lost the role to her as part of his punishment.  After this, she did several commercials starting at the age of six, until she finally got her big screen debut in Mermaids in 1990 as Cher's younger daughter. The young actress made enough of an impression to land more work; later she appeared in the video of the film's soundtrack "The Shoop Shoop Song". The following year, she starred as the morbidly precocious Wednesday Addams in the film adaptation of The Addams Family. The role would help to establish Ricci as a character actress known for playing dark, unconventional roles – she went on to play Wednesday again in the film's 1993 sequel, Addams Family Values, which became another box office draw,[citation needed]and more screen time was provided for Ricci's performance as Wednesday.

Her next project, Casper, received mixed critical reviews, but was a success at the box office, being the year's eighth highest grossing film. She also starred in Now and Then, a coming-of-age film about four 12-year-old girls and their friendship during the 1970s to the 1990s. Ricci played the younger version of Rosie O'Donnell. Now and Then was another box office success, and received favorable comparisons to Stand by Me, being called "the female version" of the film.[citation needed]She also starred in a handful of other films with teenage roles such as Gold Diggers: The Secret of Bear Mountain and That Darn Cat. In 1997, Ricci began to appear in more adult roles, beginning with her role as the troubled, sexually curious Wendy Hood in Ang Lee's critically acclaimed The Ice Storm.

Ricci has tattoos of a lion on her right shoulder blade (a reference to The Lion, the Witch and the Wardrobe, a favorite novel of hers as a kid), an Edward Gorey figure on the inside of her right wrist, praying hands on her left hip (this tattoo was originally a bat), the name "Jack" on her right thigh for a dead pet, a sparrow on her right breast, and a mermaid on her left ankle. She also had the words "Move or Bleed" on the left side of her ribcage as well as a bouquet of sweet pea on her lower back.

She was briefly engaged to fellow actor Owen Benjamin. She announced her engagement to dolly grip James Heerdegen in 2013, after having met on the set of Pan Am in 2012.

Christina Ricci plays the role of Gwyn de Vere in The Matrix Resurrections.