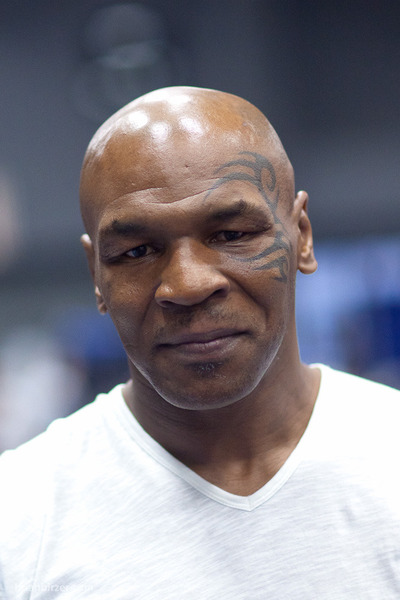 Michael Gerard "Mike" Tyson (born June 30, 1966) is a retired American professional boxer. Tyson is a former undisputed heavyweight champion of the world and holds the record as the youngest boxer to win the WBC, WBA and IBF heavyweight titles at 20 years, 4 months, and 22 days old. Tyson won his first 19 professional bouts by knockout, 12 of them in the first round. He won the WBC title in 1986 after defeating Trevor Berbick by a TKO in the second round. In 1987, Tyson added the WBA and IBF titles after defeating James Smith and Tony Tucker. He was the first heavyweight boxer to simultaneously hold the WBA, WBC and IBF titles, and the only heavyweight to successively unify them.

In 1988, Tyson became the lineal champion when he knocked out Michael Spinks after 91 seconds. Tyson successfully defended the world heavyweight championship nine times, including victories over Larry Holmes and Frank Bruno. In 1990, he lost his titles to underdog James "Buster" Douglas, by a knockout in round 10. Attempting to regain the titles, he defeated Donovan Ruddock twice in 1991, but he pulled out of a fight with undisputed heavyweight champion Evander Holyfield due to injury. In 1992, Tyson was convicted of raping Desiree Washington and sentenced to six years in prison but was released after serving three years. After his release, he engaged in a series of comeback fights. In 1996, he won the WBC and WBA titles after defeating Frank Bruno and Bruce Seldon by knockout. After being stripped of the WBC title, Tyson lost his WBA crown to Evander Holyfield in November 1996 by an 11th round TKO. Their 1997 rematch ended when Tyson was disqualified for biting Holyfield's ear.

In 2002, he fought for the world heavyweight title at the age of 35, losing by knockout to Lennox Lewis. He retired from professional boxing in 2006, after being knocked out in consecutive matches against Danny Williams and Kevin McBride. Tyson declared bankruptcy in 2003, despite having received over US$30 million for several of his fights and $300 million during his career. Tyson was well known for his ferocious and intimidating boxing style as well as his controversial behavior inside and outside the ring. Tyson is considered one of the best heavyweights of all time. He was ranked No. 16 on The Ring's list of 100 greatest punchers of all time. and No. 1 in the ESPN.com list of "The hardest hitters in heavyweight history". He has been inducted into the International Boxing Hall of Fame and the World Boxing Hall of Fame.

Tyson was born in Brooklyn, New York City. He has a brother, Rodney, who is five years older than him. His sister, Denise, died of a heart attack at age 24 in 1990.

Tyson's father, Jimmy Kirkpatrick, was from Grier Town, North Carolina (near Charlotte), where he was one of the neighborhood’s top baseball players. Kirkpatrick married and had a son, Tyson's half-brother Jimmie Lee Kirkpatrick, who would help to integrate Charlotte high school football in 1965. In 1959, Jimmy Kirkpatrick left his family and moved to Brooklyn, where he met Tyson's mother, Lorna Smith Tyson. Mike Tyson was born in 1966. Kirkpatrick frequented pool halls, gambled and hung out on the streets. “My father was just a regular street guy caught up in the street world,” Tyson said. Kirkpatrick abandoned the Tyson family around the time Mike was born, leaving Tyson's mother to care for the children on her own. Kirkpatrick died in 1992.

The family lived in Bedford-Stuyvesant until their financial burdens necessitated a move to Brownsville when Tyson was 10 years old. Tyson's mother died six years later, leaving 16-year-old Tyson in the care of boxing manager and trainer Cus D'Amato, who would become his legal guardian. Tyson later said, "I never saw my mother happy with me and proud of me for doing something: She only knew me as being a wild kid running the streets, coming home with new clothes that she knew I didn't pay for. I never got a chance to talk to her or know about her. Professionally, it has no effect, but it's crushing emotionally and personally."

Throughout his childhood, Tyson lived in and around high-crime neighborhoods. According to an interview in Details, his first fight was with a bigger youth who had pulled the head off one of Tyson's pigeons. Tyson was repeatedly caught committing petty crimes and fighting those who ridiculed his high-pitched voice and lisp. By the age of 13, he had been arrested 38 times. He ended up at the Tryon School for Boys in Johnstown, New York. Tyson's emerging boxing ability was discovered there by Bobby Stewart, a juvenile detention center counselor and former boxer. Stewart considered Tyson to be an outstanding fighter and trained him for a few months before introducing him to Cus D'Amato.

Tyson was later removed from the reform school by Cus D'Amato. Kevin Rooney also trained Tyson, and he was occasionally assisted by Teddy Atlas, although he was dismissed by D'Amato when Tyson was 15. Rooney eventually took over all training duties for the young fighter.

Tyson's brother is a physician assistant in the trauma center of the Los Angeles County-University of Southern California Medical Center. He has always been very supportive of his brother's career and was often seen at Tyson's boxing matches in Las Vegas, Nevada. When asked about their relationship, Mike has been quoted saying, "My brother and I see each other occasionally and we love each other," and "My brother was always something and I was nothing."

Tyson made his professional debut as an 18-year-old on March 6, 1985, in Albany, New York. He defeated Hector Mercedes via a first round knockout. He had 15 bouts in his first year as a professional. Fighting frequently, Tyson won 26 of his first 28 fights by KO or TKO; 16 of those came in the first round. The quality of his opponents gradually increased to journeyman fighters and borderline contenders, like James Tillis, David Jaco, Jesse Ferguson, Mitch Green and Marvis Frazier. His win streak attracted media attention and Tyson was billed as the next great heavyweight champion. D'Amato died in November 1985, relatively early into Tyson's professional career; some speculate that his death was the genesis of many of the troubles Tyson was to experience as his life and career progressed.

Tyson's first nationally televised bout took place on February 16, 1986, at Houston Field House in Troy, New York against journeyman heavyweight Jesse Ferguson. Tyson knocked down Ferguson with an uppercut in the fifth round that broke Ferguson's nose. During the sixth round, Ferguson began to hold and clinch Tyson in an apparent attempt to avoid further punishment. After admonishing Ferguson several times to obey his commands to box, the referee finally stopped the fight near the middle of the sixth round. The fight was initially ruled a win for Tyson by disqualification (DQ) of his opponent. The ruling was "adjusted" to a win by technical knockout (TKO) after Tyson's corner protested that a DQ win would end Tyson's string of knockout victories, and that a knockout would have been the inevitable result. The rationale offered for the revised outcome was that the fight was actually stopped because Ferguson could not (rather than would not) continue boxing.

On November 22, 1986, Tyson was given his first title fight against Trevor Berbick for the World Boxing Council (WBC) heavyweight championship. Tyson won the title by second round TKO, and at the age of 20 years and 4 months became the youngest heavyweight champion in history. Tyson's dominant performance brought many accolades. Donald Saunders wrote: "The noble and manly art of boxing can at least cease worrying about its immediate future, now [that] it has discovered a heavyweight champion fit to stand alongside Dempsey, Tunney, Louis, Marciano and Ali."

A 1998 ranking of "The Greatest Heavyweights of All-Time" by Ring magazine placed Tyson at No.14 on the list. Despite criticism of facing underwhelming competition during his unbeaten run as champion, Tyson's knockout power and intimidation factor made him the sport's most dynamic box office attraction. Many believe Tyson was the last great heavyweight champion.

Tyson has been legally married three times and has eight children with several different women.

His first marriage was to actress Robin Givens, from February 7, 1988 to February 14, 1989. Givens was known for her work on the sitcom Head of the Class. Tyson's marriage to Givens was especially tumultuous, with allegations of violence, spousal abuse and mental instability on Tyson's part. Matters came to a head when Tyson and Givens gave a joint interview with Barbara Walters on the ABC TV newsmagazine show 20/20 in September 1988, in which Givens described life with Tyson as "torture, pure hell, worse than anything I could possibly imagine." Givens also described Tyson as "manic depressive" on national television while Tyson looked on with an intent and calm expression. A month later, Givens announced that she was seeking a divorce from the allegedly abusive Tyson. They had no children but she claims to have had a miscarriage; Tyson claims she was never pregnant and only used that to get him to marry her. During their marriage, the couple lived in a mansion in Bernardsville, New Jersey.

His second marriage was to Monica Turner from April 19, 1997 to January 14, 2003. At the time of the divorce filing, Turner worked as a pediatric resident at Georgetown University Medical Center in Washington DC. She is the sister of Michael Steele, the former Lieutenant Governor of Maryland and former Republican National Committee Chairman. Turner filed for divorce from Tyson in January 2002, claiming that he committed adultery during their five-year marriage, an act that "has neither been forgiven nor condoned." The couple had two children, Rayna and Amir.

On May 25, 2009, Tyson's 4-year-old daughter Exodus was found by her 7-year-old brother Miguel, unconscious and tangled in a cord, dangling from an exercise treadmill. The child's mother untangled her, administered CPR and called for medical attention. Exodus was listed in "extremely critical condition" and was on life support at St. Joseph's Hospital and Medical Center in Phoenix. She died of her injuries on May 26, 2009.

Eleven days after his daughter's death, Tyson wed for the third time, to long-time girlfriend Lakiha "Kiki" Spicer, age 32, exchanging vows on Saturday, June 6, 2009, in a short, private ceremony at the La Bella Wedding Chapel at the Las Vegas Hilton. Spicer was a resident of nearby suburban Henderson, Nevada. County marriage records in Las Vegas show the couple got a marriage license 30 minutes before their ceremony. Spicer is the mother of Tyson's daughter Milan and son Morocco. His other children include Mikey (born 1990), Miguel (born 2002) and D'Amato (born 1990). He has a total of eight children including the deceased Exodus.

Tyson has been diagnosed with bipolar disorder. While on the American talk show The View in early May 2010, Tyson revealed that he is now forced to live paycheck to paycheck. He went on to say: "I'm totally destitute and broke. But I have an awesome life, I have an awesome wife who cares about me. I'm totally broke. I had a lot of fun. It (losing his money) just happened. I'm very grateful. I don't deserve to have the wife that I have; I don't deserve the kids that I have, but I do, and I'm very grateful."