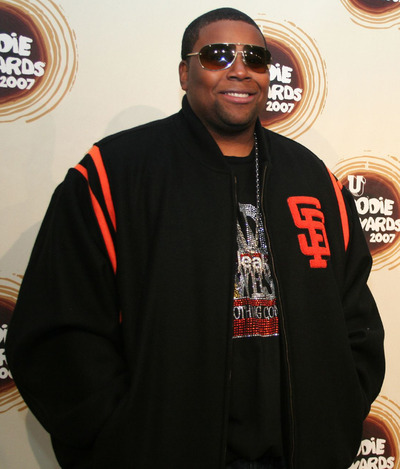 Kenan Thompson (born May 10, 1978) is an American actor and comedian. He is best known for his work as an original cast member of Nickelodeon's sketch comedy series All That in his teenage years and his current work as a cast member of Saturday Night Live. Thompson is also known for his roles in the sitcom Kenan & Kel and the films Good Burger and Fat Albert. In his early career he often collaborated with fellow comedian and All That cast member Kel Mitchell. He ranked at #88 on VH1's 100 Greatest Teen Stars.

Thompson was born and raised in Atlanta, Georgia, the son of Fletcher and Elizabeth Ann Thompson. He has one sibling, Kerwin Thompson. He began acting at age 15, appearing in the school play The Gingerbread Duck. One of his earliest roles was as an entertainment reporter for CNN's "Real News for Kids", and he would go on to star in All That, and Kenan & Kel. While Kenan attended Tri-Cities High School, a Visual and Performing Arts Magnet School in East Point, Georgia, he began filming his first movie, D2: The Mighty Ducks.

Kenan has starred in several films including Good Burger, based on the All That sketch of the same name, and Fat Albert, in which he played the title character. He has also had supporting roles in the movies Heavyweights, D2: The Mighty Ducks, Love Don't Cost a Thing, Barbershop 2: Back in Business, My Boss's Daughter, and Snakes on a Plane. Kenan had a recurring role on The Steve Harvey Show as Junior, with co-star Kel Mitchell. Recently, he returned to Nickelodeon for the show The Mighty B! as the voice of Rocky Rhodes. He also guest-starred on iCarly as himself.