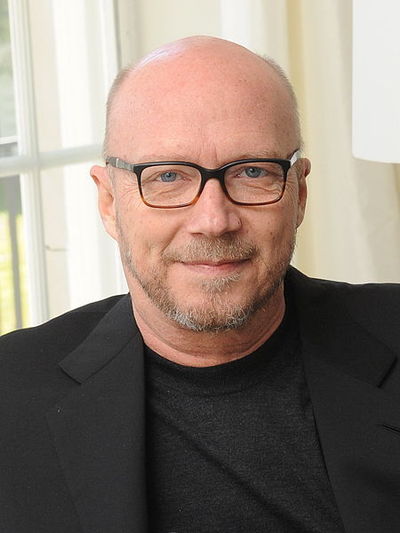 Paul Edward Haggis (born March 10, 1953) is a Canadian screenwriter, producer, and director. He spent his early career producing and directing various American and Canadian television network series. Among his achievements are screenwriter and producer credits for consecutive Best Picture winners, 2004's Million Dollar Baby and 2005's Crash, the latter of which he also directed.

Haggis was born on March 10, 1953, in London, Ontario, the son of Mary Yvonne (née Metcalf) and Edward H. Haggis. He was raised as a Catholic, but considered himself an atheist until joining the Church of Scientology, which he later denounced as a cult. The Gallery Theatre in London, Ontario, was owned by his parents, and Haggis gained experience in the field through work at the theatre. He attended St. Thomas More Elementary School, and after being inspired by Alfred Hitchcock and Jean-Luc Godard, proceeded to study art at H. B. Beal Secondary School. After viewing Michelangelo Antonioni's 1966 film Blowup, he traveled to England with the intent of becoming a fashion photographer. Haggis later went back to Canada to pursue studies in cinematography at Fanshawe College. In 1975, Haggis moved to Los Angeles, California, to begin a career in writing in the entertainment industry.

Haggis began to work as a writer for television programs, including The Love Boat, One Day at a Time, Diff'rent Strokes, and The Facts of Life. With The Facts of Life, Haggis also gained his first credit as producer. During the 1980s and 1990s, Haggis wrote for television series including The Tracey Ullman Show, Due South, L.A. Law, and EZ Streets. He helped to create the television series Walker, Texas Ranger, Family Law, and Due South. Haggis served as executive producer of the series Michael Hayes and Family Law.

He gained recognition in the film industry for his work on the 2004 film Million Dollar Baby, which Allmovie described as a "serious milestone" for the writer/producer, and as "his first high-profile foray into feature film". Haggis had read two stories written by Jerry Boyd, a boxing trainer who wrote under the name of F.X. Toole. Haggis acquired the rights to the stories, and developed them into the screenplay for Million Dollar Baby. Clint Eastwood portrayed the lead character in the film. Eastwood also directed the film, and used the screenplay written by Haggis. Million Dollar Baby received four Academy Awards including the Academy Award for Best Picture.

After maintaining active membership in the Church of Scientology for 35 years, Haggis left the organization in October 2009. He was motivated to leave Scientology in reaction to statements made by the San Diego branch of the Church of Scientology in support of Proposition 8, the ballot initiative which banned gay marriage in California. Haggis wrote to Thomas Davis, the Church's spokesman, and requested that he denounce these statements; when Davis remained silent, Haggis responded that "Silence is consent, Tommy. I refuse to consent." Haggis went on to list other grievances against Scientology, including its policy of disconnection, and the smearing of its ex-members through the leaking of their personal details. The Observer commented on defections of Haggis and actor Jason Beghe from Scientology, "The decision of Beghe and Haggis to quit Scientology appears to have caused the movement its greatest recent PR difficulties, not least because of its dependence on Hollywood figures as both a source of revenue for its most expensive courses and an advertisement for the religion." In an interview with Movieline, Haggis was asked about similarities between his film The Next Three Days and his departure from the Scientology organization; Haggis responded, "I think one’s life always parallels art and art parallels life." In February 2011, The New Yorker published a 25,000-word story, "The Apostate", by Lawrence Wright, detailing Haggis's allegations about the Church of Scientology. The article ended by quoting Haggis: "I was in a cult for thirty-four years. Everyone else could see it. I don’t know why I couldn’t."