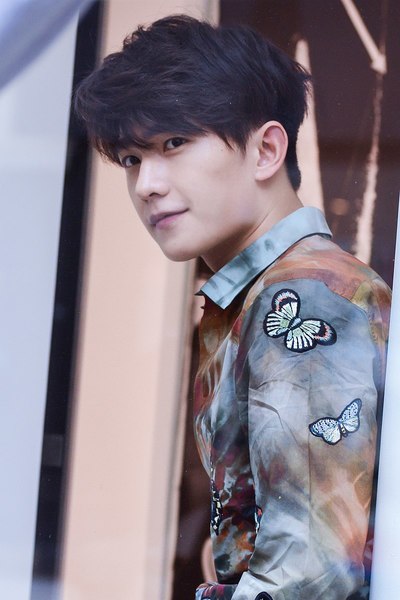 At age 11, Yang was admitted to the Department of Dance in People's Liberation Army Arts College in China. He also has studied at the Central Academy of Drama for a period of time.

In December 2007, he was chosen to play the lead role Jia Baoyu by director Li Shaohong in The Dream of Red Mansions. One of the most expensive Chinese TV series produced at RMB118 million (US$17.55 million), the 50-episode drama premiered on July 6, 2010.

In 2011, Yang featured in The Founding of a Party, a patriotic tribute detailing the process of establishing the Communist Party of China. He continued to build up his filmography, featuring in war dramas The War Doesn't Believe in Tears (2012) and Ultimate Conquest (2013), and romance series Flowers of Pinellia Ternata (2013).

On April 29, 2014, Yang ended his contract of 7 years with his company Rosat Entertainment.

In 2015, Yang started to gain recognition for his performance in The Left Ear, a coming-of-age film which is also the directorial debut of Alec Su. The film was a box-office hit, and Yang received positive for his performance as Xu Yi. He then participated in travel-reality show Divas Hit the Road, which was a huge topic online when it aired and helped Yang top the "2015 Chinese Reality Show Star Ranking". He next starred in action-adventure web-drama The Lost Tomb based on the novel of the same name. The Lost Tomb was the most watched web drama of the year, and Yang gained acclaim from novel fans and audience for his portrayal of Zhang Qiling. Yang then played the male lead in youth sports drama The Whirlwind Girl, which gained one of the highest viewership ratings of the year. He also released his first single, "Tender Love". At the end of the year, Yang won several awards including the Most Popular TV Actor of the Year at iQiyi All-Star Carnival Night 2016; and the Most Anticipated Actor and Most Influential Actor awards at the China TV Drama Awards.

In 2016, Yang starred in youth romance drama Love O2O, based on Gu Man's novel of the same name. The drama was an international hit, and is the most viewed modern drama in China. Following the airing of Love O2O, Yang experienced a huge surge in popularity and successfully broke into the mainstream. To thank his fans, Yang released the song "Love is Crazy", a jazz/rock single. He next starred in romance film I Belonged to You, which was a huge success and broke the box-office sales record for mainland-produced romance films. He was named as one of the Top 10 Chinese celebrities with most commercial value by CBN Weekly.

In 2017, Yang starred alongside Liu Yifei in romantic fantasy film Once Upon a Time.

In 2018, Yang starred in the fantasy action drama Martial Universe. Forbes China listed Yang under their 30 Under 30 Asia 2017 list which consisted of 30 influential people under 30 years old who have had a substantial effect in their fields.

In 2019, Yang played the leading role Ye Xiu in the eSports drama The King's Avatar. The same year he was cast in the military drama Glory of the Special Forces directed by Xu Jizhou. He was also announced to star in the disaster film Vanguard alongside Jackie Chan.

In January 2016, Yang became the first artist to be featured on the China Post postage stamp.