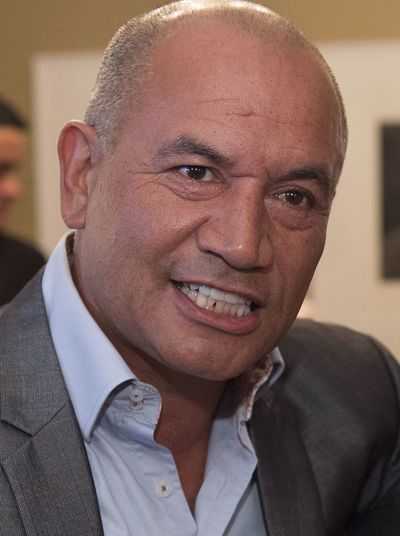 Temuera Derek Morrison MNZM (born 26 December 1960) is a New Zealand actor who first gained recognition for his role as Dr. Hone Ropata on the New Zealand soap opera Shortland Street. He gained critical acclaim after starring as Jake "The Muss" Heke in the 1994 film Once Were Warriors and its 1999 sequel What Becomes of the Broken Hearted?.

He became known internationally after portraying Jango Fett and his clone troopers in Star Wars: Episode II – Attack of the Clones (2002) and Star Wars: Episode III – Revenge of the Sith (2005). In addition, he provided the voice of the clone troopers in both films. He is also known for voicing Chief Tui, the father of the title character in Disney's Moana (2016), and for playing Arthur Curry's father in Aquaman (2018).

Morrison was born in the town of Rotorua, in the North Island of New Zealand. He is the son of Hana Morrison (née Stafford), and musician Laurie Morrison. He is of Māori, as well as Scottish and Irish, descent. His sister was performer Taini Morrison and his uncle was musician Sir Howard Morrison. His secondary education took place at Wesley College, Auckland, and Western Heights High School, Rotorua. Morrison lives in New Zealand, and divides his time between filming there, Australia, and the United States. He has an adult son, James, from a relationship in the late-1980s with singer Kim Willoughby from the all-girl group When the Cat's Away; and a daughter, Aiorangi, with Peata Melbourne. Morrison's partner of seven years, Ashlee Howden-Sadlier, is 26 years his junior, and is of Tūhoe and Ngāti Porou descent.

His first role was Rangi in the 1973 film Rangi's Catch. He trained in drama under the New Zealand Special Performing Arts Training Scheme. One of his earliest starring roles was in the 1988 film Never Say Die, opposite Lisa Eilbacher. After this he played Dr. Hone Ropata on the television soap opera Shortland Street from 1992–1995; he was immortalised when another character rebuked his with the line "You're not in Guatemala now, Dr. Ropata!"

In 1994, he received attention for his role as the violent and abusive Māori husband Jake "The Muss" Heke in Once Were Warriors, a film adaptation of Alan Duff's novel of the same name. The film became the most successful local title released in New Zealand, and sold to many countries overseas. The role won him international acclaim and he received the award for best male performance in a dramatic role at the 1994 New Zealand Film and Television Awards. He reprised the role in the sequel, What Becomes of the Broken Hearted?, for which he received the Best Actor award from the New Zealand Film Awards. Despite the acclaim he received for his performance, Morrison said in 2010 that he felt typecast by the role, to the point that it was "a millstone round my neck".

He has appeared in supporting roles in Speed 2: Cruise Control (1997) and The Beautiful Country (2004). In 2005, Morrison became the host of the talk show The Tem Show on New Zealand television.

In the 1996 Queen's Birthday Honours, Morrison was made a Member of the New Zealand Order of Merit, for services to drama.

He started writing an autobiography in 2009, which he hoped would inspire others to "reach for the stars".

He released his debut album, Tem, through Sony Music Entertainment NZ in late November 2014. The album consists of covers of songs that his father, and uncle Sir Howard Morrison, used to perform at local venues when he was growing up.

In recent years, Morrison has gained attention for his role as the bounty hunter Jango Fett in Star Wars: Episode II – Attack of the Clones (2002). Part of the film's plot involves an army of clones created with Jango's DNA; Morrison also provided the voice acting for the clones. He reappeared as a number of clones in Star Wars: Episode III – Revenge of the Sith, and re-recorded the lines of the character Boba Fett (Jango's "son") and another clone in the 2004 DVD re-releases of the original Star Wars trilogy, replacing the voice of Jason Wingreen.

Morrison returned to Shortland Street for six weeks in June/July 2008 to reprise the role of Dr. Hone Ropata.

In 2008, Morrison also appeared on New Zealand skit comedy television show Pulp Sport, where he appeared in a sketch that made fun of him being cloned.