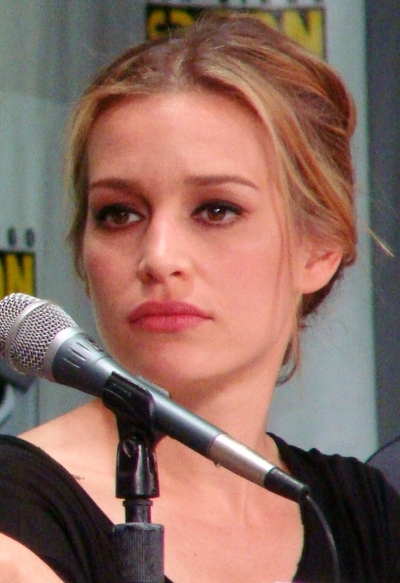 Piper Lisa Perabo (born October 31, 1976) is an American stage, film and television actress. Since her breakthrough role in Coyote Ugly (2000), her subsequent films have included Lost and Delirious (2001), Cheaper by the Dozen (2003), Cheaper by the Dozen 2 (2005), The Prestige (2006), Beverly Hills Chihuahua (2008) and Looper (2012). Since 2010, she has played Annie Walker, the lead role on the USA Network series Covert Affairs, for which she has been nominated for a Golden Globe Award for Best Actress.

Perabo was born in Dallas, Texas and grew up in Toms River, New Jersey, the daughter of Mary Charlotte (née Ulland), a physical therapist, and George William Perabo, a professor of poetry at Ocean County College. Perabo is of Portuguese and Norwegian descent. Her parents named her after actress Piper Laurie and she has two younger brothers: Noah (born May 1979), and Adam (born August 1981). Perabo graduated from high school at Toms River High School North and graduated summa cum laude from Honors Tutorial College at Ohio University in Athens, Ohio in 1998 with a bachelor's degree in theater, also studying physics, poetry and Latin in her final year.

Perabo was first noticed a year before she graduated from university. She was in New York City, visiting her then-boyfriend and accompanied him to an audition. Casting director Denise Fitzgerald spotted her and asked her to read for a part. Perabo wasn't cast but when Fitzgerald found out that she didn't have any representation, she made phone calls on Perabo's behalf and found her a manager, who still represents her.

After graduating, Perabo moved to New York City, where she worked as a waitress. She also studied acting at the La MaMa Experimental Theatre Club and had roles in various plays. She was cast in her first feature film just a month after moving to the city, Marc Levin's comedy Whiteboyz. In 2000 Perabo was cast in The Adventures of Rocky and Bullwinkle as FBI agent Karen Sympathy. Her next film role was in Coyote Ugly as Violet "Jersey" Sanford, for which she won an MTV Movie Award for Best Music Moment for "One Way or Another".

Perabo is close friends with actress Lena Headey, and has been since they starred together in two films in 2005, The Cave and Imagine Me & You. Perabo speaks fluent French and is an advocate of LGBT rights.