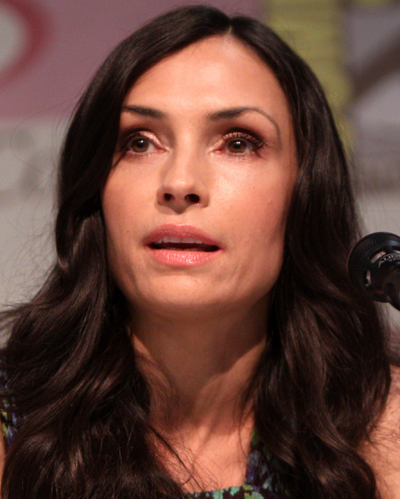 Famke Beumer Janssen (born 5 November 1965) is a Dutch actress, director, screenwriter, and former fashion model. She is known for playing the villainous Bond girl Xenia Onatopp in Golden Eye (1995), Jean Grey/Phoenix in the X-Men film series (2000–2013), and Lenore Mills in Taken (2008), and its sequel, Taken 2 (2012). In 2008, she was appointed a Goodwill Ambassador for Integrity by United Nations. She made her directorial debut with Bringing Up Bobby in 2011.

Janssen was born in Amstelveen, Noord-Holland,Netherlands. Her first name, Famke, means "girl" in West Frisian, the native language of the Dutch province Friesland. She has two sisters, director Antoinette Beumer and actress Marjolein Beumer. In addition to her native Dutch, Janssen speaks English and French. She also learned German, but has not kept up with it. Following her high school graduation, Janssen studied economics for a year at the University of Amsterdam, which she later called "the stupidest idea I ever had." In the early 1990s, she enrolled at Columbia University to study creative writing and literature.

In 1984, Janssen moved to the United States to begin her professional career as a fashion model. She signed with Elite Model Management and worked for Yves Saint Laurent, Chanel, and Victoria's Secret. She starred in a 1988 commercial for the perfume Exclamation by Coty, Inc. Her looks have been compared to Hedy Lamarr and other 1940s films stars.

After retiring from modelling in the early 1990s, Janssen had guest roles on several television series, including a starring role in the 1992 Star Trek: The Next Generation episode "The Perfect Mate", as empathic metamorph Kamala, opposite Patrick Stewart, with whom she later starred in the X-Men film series. That same year, Janssen was offered the role of Jadzia Dax in Star Trek: Deep Space Nine, but turned it down to pursue film roles. Her first film role was alongside Jeff Goldblum in the 1992 crime drama film Fathers & Sons.

In 2011, Janssen made her directorial début with the drama Bringing Up Bobby. She also wrote the screenplay to the film, which stars Milla Jovovich, Bill Pullman, and Marcia Cross.

Janssen was married to writer and director Kip Williams, son of architect Tod Williams, from 1995 to 2000.