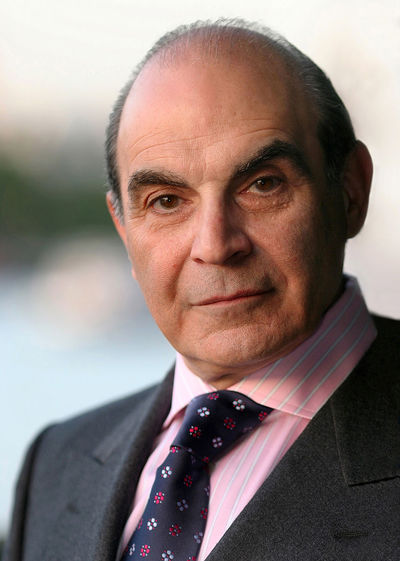 David Suchet, CBE (born 2 May 1946) is an English actor, known for his work on British stage and television. He played Edward Teller in the TV serial Oppenheimer and received the RTS and BPG awards for his performance as Augustus Melmotte in the 2001 British serial The Way We Live Now. For his role as Agatha Christie's detective Hercule Poirot in Agatha Christie's Poirot, he received a 1991 British Academy of Film and Television Arts (BAFTA) nomination.

Suchet was born in London, the son of Joan Patricia (née Jarché; 1916–1992), an actress, and Jack Suchet. Jack emigrated from South Africa to England in 1932, trained to be a doctor at St Mary's Hospital Medical School, London, in 1933, and became an obstetrician and gynaecologist.

Suchet's father was of Lithuanian Jewish descent, the son of Izidor Suchedowitz, originally from Kretinga in the Pale of Settlement of the Russian Empire. At some point, the family name was recorded as "Schohet", a Yiddish (from Hebrew shochet) word defining the profession of kosher butcher. Suchet's father changed his surname to Suchet while living in South Africa. David's mother was English-born and Anglican (she was of Russian Jewish descent on her own father's side, and English Anglican on her mother's side). He was raised without religion, but became a practising Anglican in 1986, and was confirmed in 2006.

Suchet and his brothers, Peter and John, attended Grenham House boarding school in Birchington-on-Sea, Kent; then, after attending another independent school, Wellington School in Somerset, he took an interest in acting and joined the National Youth Theatre at the age of 18. He trained at the London Academy of Music and Dramatic Art, where he now serves as a council member.

His older brother, John, is a British television presenter and former ITN newscaster. Suchet's nephew is the broadcaster Richard Suchet.

Suchet began his acting career at the Watermill Theatre, Bagnor, Berkshire; he has said that Watermill "fulfils my vision of a perfect theatre". In 1973, he joined the Royal Shakespeare Company. In 1981–82, he played Bolingbroke in Richard II opposite Alan Howard. Suchet played "John" in the drama Oleanna at the Royal Court Theatre in 1993. It was directed by Harold Pinter, and co-starred Lia Williams as "Carol". In 1996–97 he played opposite Dame Diana Rigg in the West End production of Who's Afraid of Virginia Woolf? He was also featured as Salieri from 1998 to 2000 in the Broadway production Amadeus. In 2007, at the Chichester Festival Theatre, he played Cardinal Benelli in The Last Confession, about the death of Pope John Paul I. In 2014, he reprised the role of Benelli in the Australian tour of the play.

He has been starring as Lady Bracknell in The Importance of Being Earnest by Oscar Wilde at the Vaudeville Theatre in London since June 2015 and on tour.

After making his first TV appearance in 1970, he appeared in the 1980 made-for-TV film version of A Tale of Two Cities. In 1980, he also played Edward Teller, later developer of the US H-bomb, in the joint BBC-US TV serial about the US Manhattan Project called Oppenheimer. In 1983, he played the insidious half-Chinese policeman with orders to kill British spy Sidney Reilly in Reilly, Ace of Spies. He portrayed Sigmund Freud in the six-hour mini-series Freud, co-produced by the BBC in 1984. In 1985, he played Blott in the television series Blott on the Landscape, and corporate whistle-blower Stanley Adams in A Song for Europe. Coincidentally, Suchet appeared as Inspector Japp in 1985's Thirteen at Dinner, in which Peter Ustinov portrayed Poirot. In his book, Poirot and Me, Suchet mentions that Ustinov one day approached him and told him that Suchet could play Poirot and would be good at it. The following events happened:

“That conversation came back to me as Brian Eastman told me that ITV wanted to make a series of ten one-hour films based on the Poirot short stories. Then he dropped his bombshell: 'We are very keen that you should play Poirot.'

“My spoonful of curry stopped halfway to my mouth. I was astounded. Me, the serious Shakespearean actor, portrayer of men with haunted souls, playing a fastidious, balding detective?

“Brian sent me two Poirot novels and I became intrigued. The Poirot in the books was nothing like the character I'd seen on screen: he was more elusive, more pedantic, and most of all, more human. But I still wasn't sure whether I should play him. I called my elder brother John, then a newscaster at ITN, and asked what he thought.

“‘I wouldn't touch it with a barge pole,' John said firmly. 'Poirot's a bit of a joke, a buffoon. It's not you at all.' I gulped.
'Well, what I'm reading isn't a buffoon,' I told him. 'It's a character that I've never seen portrayed.'

“There was a slight sigh. 'Of course, you must do it if you want to,' he said quietly. 'Good luck. Only a word of warning: it may be difficult to get people to take him seriously.'

“It turned out he was right. Nonetheless, I was convinced that I could bring the true Poirot, as Agatha Christie had written him, to life. I told Brian that I would do it.”

In 1988, he played Leopold Bloom in the Channel 4 documentary The Modern World: Ten Great Writers, in which some of James Joyce's Ulysses was dramatised. During the time, he spent days reading Agatha Christie's books about Hercule Poirot:

“The more I read, the more the little man entranced me. There were so many foibles and mannerisms — his need for order, his dislike of the country, his silver 'Turnip' pocket watch. I started to write a private list of his habits and character.

“‘Hates to fly,' I wrote in my dossier. 'Makes him feel sick. Regards his moustache as a thing of perfect beauty. A man of faith and morals. Regards himself as "un bon Catholique".'

I carried this dossier around on the set throughout all my years as Poirot, years in which I grew to love and admire the little Belgian.”

In 1989, he took the title role of Hercule Poirot for the long-running television series Agatha Christie's Poirot. In 2001, he had the lead role in the David Yates-directed BBC television serial The Way We Live Now and, in April 2002, he played the real-life barrister, George Carman (QC), in the BBC drama Get Carman: The Trials of George Carman QC.

In 2003, Suchet starred as the ambitious Cardinal Wolsey in the two-part ITV drama Henry VIII opposite Ray Winstone as Henry VIII and Helena Bonham Carter as Anne Boleyn. In May 2006, he played the role of the fallen press baron Robert Maxwell in Maxwell, a BBC2 dramatisation of the final 18 months of Maxwell's life. During the same year, he voiced Poirot in the adventure game Agatha Christie: Murder on the Orient Express.

At Christmas 2006, he played the vampire hunter Abraham Van Helsing in a BBC adaptation of Bram Stoker's novel Dracula. He appeared in the disaster film Flood, released in August 2007, as the Deputy Prime Minister of the United Kingdom at a time when London is devastated by flooding. Suchet appeared on daytime-TV chat show Loose Women on 6 February 2008 to talk about his film The Bank Job, in which he played Lew Vogel, alongside Jason Statham and Saffron Burrows. In 2008, he took part in the genealogy documentary series Who Do You Think You Are?, and discovered facts about his family history.

He starred in the 2009 CBC made-for-TV film Diverted. He starred as the main antagonist, Reacher Gilt, in the 2010 Sky TV adaptation of Going Postal, based on Pratchett's book of the same name. He appeared in the film Act of God as Benjamin Cisco. In 1987, Suchet played a bigfoot hunter in Harry and the Hendersons. He had roles in two Michael Douglas films, A Perfect Murder and The In-Laws. In 1997, he starred in the independent film Sunday. In November 2011, Suchet and ITV announced that Suchet would complete the canon of Poirot novels, in a thirteenth and final series of Poirot. The final episode, "Curtain", aired on ITV on 13 November 2013. During the time the final episode was filmed, Suchet expressed his sadness at his final farewell to the Poirot character he had loved:

“This is the death of a dear friend. For years it has been Poirot and me — and to lose him is a pain almost beyond imagining.

“Poirot's death was the end of a long journey for me. I had only ever wanted to play Dame Agatha's true Poirot [...] He was as real to me as he had been to her: a great detective, a remarkable man, if, perhaps, just now and then, a little irritating.

“I think back to Poirot's last words in the scene before he dies. That second 'Cher ami' was for someone other than Hastings. It was for my dear, dear friend Poirot. I was saying goodbye to him as well — and I felt it with all my heart.”

With the exception of one short story, Suchet has played the role in adaptations of every novel and short story featuring the character written by Dame Agatha Christie.

In 2017, Suchet starred as Dr Fagan in the BBC1 adaptation of Evelyn Waugh's Decline and Fall, and guest starred in the role of a character called "The Landlord", for an episode of the tenth series of Doctor Who entitled Knock Knock.

In 1972, Suchet first met his wife, Sheila Ferris, at the Belgrade Theatre, Coventry, where they were both working; he says that he fell in love with her as soon as he saw her, and that it took a while to persuade her to go out for a meal with him. They were married on 30 June 1976; the couple have a son, Robert (b. 1981), formerly a captain in the Royal Marines, and a daughter, Katherine (b. 1983), a physiotherapist.

Suchet is the brother of John Suchet, a national news presenter for Five News and Breakfast Show Presenter on Classic FM (January 2011). He is the uncle of broadcaster Richard Suchet, who is the son of Suchet's youngest brother, Peter.

Suchet's maternal grandfather, James Jarché, was a famous Fleet Street photographer notable for the first pictures of Edward VIII and Wallis Simpson and also for his pictures of Louis Blériot (1909) and the Siege of Sidney Street. Suchet first became interested in photography when his grandfather gave him a Kodak camera as a present. The Jarché family was originally named Jarchy, and were Russian Jews.

Suchet's paternal grandfather, Lithuanian Jew Isidor Shokhet (shochet means "kosher butcher" in Yiddish; derived from Hebrew), lived in Kretinga, a Lithuanian city in the Pale of Settlement of the Russian Empire (until 1791 in the Polish–Lithuanian Commonwealth; now in Lithuania). After escaping persecution to relocate 16 mi (26 km) away to Memel in the German Empire, Isidor changed his surname to the still Yiddish, but Germanized with a Slavic twist, Suchedowitz, where Suched+o+witz resembles the Polish name (Slavic) construction structure of [root]+wicz with o in between when the last letter of the root is d, t, h, n, etc., e.g. Janowicz=Jan+o+wicz, made German/Yiddish-like by replacing "cz" with "tz", e.g. Janowitz; also suche means "dry" in Polish), and then to Suchet after moving to Cape Town, South Africa.

Suchet's maternal grandmother's great-grandfather, George Jezzard, was a master mariner. He was captain of the brig Hannah, which foundered nine miles off the coast of Suffolk during a terrible storm on 28 May 1860, in which more than 100 vessels and at least 40 lives were lost. Jezzard and six others of his crew were saved by local rescuers just before their ship sank.