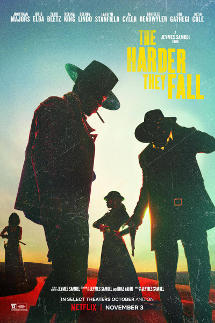 The Harder They Fall stars Jonathan Majors as an outlaw named Nat Love who discovers that his enemy and crime boss, Rufus Buck (played by Idris Elba) is being released from prison. He then reunites his gang to track Rufus down and seek revenge. Also starring in this film are Zazie Beetz, Regina King, Delroy Lindo, Lakeith Stanfield, and more.