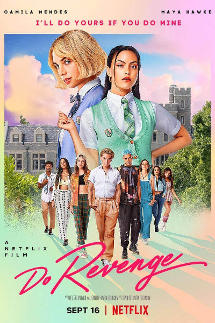 Drea (Camila Mendes) is at the peak of her high school powers as the Alpha it-girl on campus when her entire life goes up in flames after her sex tape gets leaked to the whole school, seemingly by her boyfriend and king of the school, Max (Austin Abrams). Eleanor (Maya Hawke) is an awkward new transfer student who is angered to find out that she now has to go to school with her old bully, Carissa (Ava Capri) who started a nasty rumor about her in summer camp when they were 13. After a clandestine run-in at tennis camp, Drea and Eleanor form an unlikely and secret friendship to get revenge on each other’s tormentors. Do Revenge, the sophomore film from director Jennifer Kaytin Robinson, is a subverted Hitchcock-ian dark comedy featuring the scariest protagonists of all: teenage girls. The film also stars Rish Shah, Talia Ryder, Jonathan Daviss, Maia Reficco, Paris Berelc, Alisha Boe and Sophie Turner and is co-written by Celeste Ballard and Jennifer Kaytin Robinson.