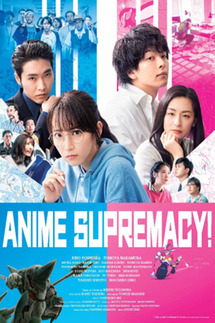 PG Comedy, Drama 2 hrs 08 min
Be the first to rate this

The anime industry of Japan is enormous, with 200 new TV shows and two trillion yen in revenue each year. For seven years, soft-spoken yet strong-willed Hitomi Saito has climbed the ranks, and is set to direct a series for the first time. At the same moment, the difficult but undeniably brilliant director Chiharu Oji is set to make his big comeback after almost a decade. The hit series that made Oji famous is what inspired Saito to jump into the anime field, and her goal is to match, and even surpass, his success and relevance. Her chance has arrived. Their two programs are both scheduled to debut in the same prime-time Saturday slot, and after Saito challenges her rival on stage at an anime convention, the two production teams each set out to outdo one another, because there can only be one number-one!