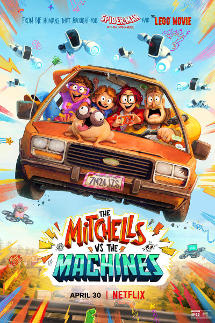 When Katie Mitchell (Abbi Jacobson), a creative outsider, is accepted into the film school of her dreams, her plans to meet "her people" at college are completely upended when her nature-loving dad Rick (Danny McBride) plans for an ultimate family road trip. This means instead of flying there as she planned, Rick, her wildly positive mom Linda (Maya Rudolph), her quirky little brother Aaron (Mike Rianda), and the family's pet pug Monchi, will drive Katie to her school together. However, Rick's plan of getting all of them to truly bond as a family for one last time is suddenly interrupted by a tech uprising: all around the world, the electronic devices that Katie, Linda, Aaron and most all other people love – from mobile phones to home appliances to an innovative new line of personal robots – decide it is time to take over. With the help of two friendly malfunctioning robots, the Mitchells will have to get past their problems and work together to save the world.

[About]
The Mitchells vs. the Machines (previously titled Connected) is an upcoming American computer-animated science fiction comedy film produced by Sony Pictures Animation. The film is directed by Michael Rianda, and written by Rianda and Jeff Rowe (who also serves as co-director), with Phil Lord, Christopher Miller, and Kurt Albrecht serving as producers.The film follows a family that winds up having to save Earth from a technological singularity. It stars the voices of Abbi Jacobson, Danny McBride, Maya Rudolph, Eric Andre, Fred Armisen, Beck Bennett, Conan O'Brien, Charlyne Yi, Sasheer Zamata, Rianda, and Olivia Colman.

The Mitchells vs. the Machines had its theatrical release cancelled due to the COVID-19 pandemic. The film was sold to Netflix, and is set to be digitally released on the streaming service on April 30, 2021.