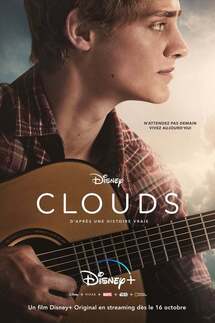 In the fall of 2012, Zach Sobiech performs an acoustic rendition of "Sexy and I Know It" to an amused crowd at his school's talent show. Zach has been struggling with osteosarcoma and has been receiving regular treatments for it. His best friend, Sammy Brown, conspires with him by helping him to write music ("Blueberries"). Zach manages to ask out fellow student Amy Adamle for a picnic, but before he is able to do so, he begins to have a coughing fit that concerns his mother, Laura, who rushes him to the hospital. He has a collapsed lung and emergency surgery is performed on him. While they fix his lung, they learn that the treatments are no longer effective and his cancer is now terminal, giving him six to ten months to live. Zach tells Sammy and Amy about his diagnosis while he is inspired by his teacher, Milton Weaver, about what he is to do with the rest of his life. [cont.]

[About]
Clouds is a 2020 American biographical musical drama film directed and produced by Justin Baldoni and written by Kara Holden from a story by Holden, Patrick Kopka, and Casey La Scala. It is based upon the memoir Fly a Little Higher: How God Answered a Mom's Small Prayer in a Big Way by Laura Sobiech. The film stars Fin Argus, Sabrina Carpenter, Madison Iseman, Neve Campbell, Tom Everett Scott, and Lil Rel Howery, following the life of Zach Sobiech.

Originally scheduled to be theatrically released by Warner Bros. Pictures, Disney takes over the distribution rights and released the film on their streaming service Disney+ on October 16, 2020.