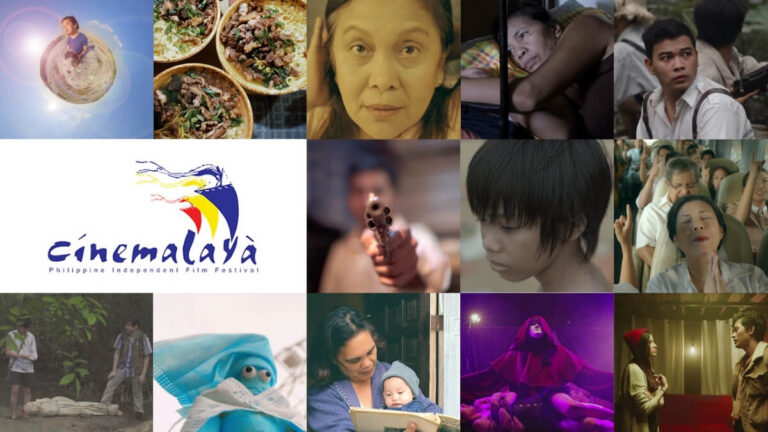 Cinemalaya will once again showcase an exciting lineup of short films that will compete for the Balanghai trophies!

The country’s biggest independent film festival, the Cinemalaya Philippine Independent Film Festival is back for its 17th year this 2021!

Due to the pandemic and the lockdown last year, Cinemalaya moved to a digital platform to continue bringing quality indie films to Filipinos stuck in their homes. This year, the film festival will present its second online edition from August 6 to September 5, showcasing once more an interesting lineup of short films that will compete for the prestigious Balanghai trophies.

During a recent press conference, Cinemalaya revealed the festival’s thirteen finalists that were chosen from a pool of over 200 entries submitted for the competition. Check out their official posters, trailers, and synopses below:

Awakened by a mysterious voice, Arjan finds himself alone on a small planet, called Planet I. Soon, he finds himself exploring the little planet for 40 days.

Micro-food establishments have been gravely affected by the pandemic. The film features the struggles faced by Ilocano food entrepreneurs and how they slowly rise amidst the challenges of this health crisis.

After years of being teased as the town’s old virgin, Lola Mayumi decides to hire a young callboy who never expected to have an elderly client. When the two meet, an unlikely connection forms between them. After a night of intimacy and vulnerability, Lola Mayumi and the callboy start to question their beliefs. Her belief on how she sees men is tested, are they really all bad? Or are there actually good men out there?

ATE, an aging household helper, struggles with the slow, dull, day-to-day depression of home quarantine in the midst of a nationwide lockdown. Her two teenage employers also struggle and cope in their own way, but seem to take out their negative feelings on her. After running a series of stressful chores for them, Ate finds a familiar medicine that gives her an unexpected form of relief and a newfound connection with the teenagers in her care.

Set in Pampanga in 1940, Remedios Gomez is a classic woman through and through, and she has the town’s beauty pageant crown to prove it. But when the Empire of Japan invades the Philippines, plunging the country into unmitigated chaos and violence, her quiet provincial life is completely overturned. After her father is tortured and killed by the Japanese for his refusal to obey them, Remedios runs to the mountains with her brother Oscar to join the Hukbalahap resistance and find renewed purpose in the war. Once she arrives in the thick jungle encampment, however, she discovers that not only does being a woman limit her options in the resistance, but her suppressed grief over her father’s death continues to persist. She must grapple with both obstacles as she tries to find the strength to be who she needs to be for her country, while still unapologetically being herself.

Driven by desperation, security guard Gabriel Arkanghell resorts to robbing a bus. Just before he could commit the crime, two seasoned robbers beat him to the punch. As one of them approaches his seat, Gabriel tightens his grip on his concealed firearm and struggles to make the decision whether to become a hero and take the robbers down or fall victim to the robbery himself.

Santi, an ill-behaved child, steals a dinosaur toy which makes his father mad. After he runs away from home, Santi accidentally drowns in the river but wakes up on a mysterious island where odd traditions are meant to be followed. He is then sentenced to clean the shore full of trash as punishment for stealing the revenant’s sacred boat. Luckily, an old woman helps him and they form a strong bond. But after helping the old woman achieve her peace, the revenant finally allows him to leave their sanctuary. He returns home but his father is nowhere to be found. Instead, he finds the dinosaur toy floating on the river.

J.C., a prepubescent boy, slowly learns of his special role in the impending apocalypse during a religious camp. As he participates in the camp activities, he gets confused between constantly emerging sexual fantasies and his divine calling.

9. Looking For Rafflesias And Other Fleeting Things

A community fears the tikbalang (horse demon) which is mistakenly blamed for various killings in the forest. Gubat, a tikbalang, transforms into a teenage boy and searches for the truth. In the mountain, he meets Darren, an American botanist who is looking for rafflesias. His interactions with the American unravel his inner desires that he has never faced before. This pushes him to reveal his identity and puts his life at risk.

By Che Tagyamon And Glenn Barit

After getting disposed of, a facemask starts to turn into a humanoid figure. It searches for its previous owner, but finds him already with a new and better face mask. It gets heartbroken then wanders around different places in Manila, and eventually finds another similar-looking facemask figure.

Entirely shot using a mobile phone, the film depicts life during the quarantine. It focuses on the story of Lolang Keyag who lives in isolation with her baby grandson Eli, as she was left to take care of him during the lockdown period. Despite the difficulties faced in this trying time, she tries her best to be hopeful for her grandson.

Elle, a young model new to the industry, arrives to the set of her first commercial job to discover that the initial idea was scrapped. A mysterious new concept has been developed, but the crew and director keep forgetting to let her know what it is. However, after an afternoon of tight costume fittings, rough prop work, and meetings with creepy producers, Elle begins to suspect something else might be afoot.

After witnessing an awkward fight between her writer and his girlfriend, a comic strip illustrator decides to tell him what is plaguing his relationships with other girls. The conversation explodes into a discussion on relationships, social norms, their history, and their possible future, and it becomes increasingly clearer that the trajectory of their career and friendship are on the line.

The films will be available on KTX.ph via pay-per-view. Tickets to watch the finalists are priced P150 per bundle, with the thirteen short films divided into two bundles. Over 80 free screenings will be held during the festival as well.

Also joining the festival’s main competition are the Cinemalaya mainstays including the Gawad CCP Para sa Alternatibong Pelikula at Video, Cinemalaya Retrospectives, Visions of Asia, and IndieNation. The festival will also pay tribute to individuals who have made great contributions to the Philippine film industry, including director Mel Chionglo, former head of the Cinemalaya Competition and Monitoring Committee with the screenings of three of his best films.

There are also exciting announcements made during the press conference. One is that the Cultural Center of the Philippines (CCP) is opening a hybrid drive-in cinema, dubbed Cinema Under the Stars, at Liwasang Ullalim where film habitués can watch a movie in their vehicles, bikes, or even in their jogging attire.

The festival will also mark the launch of the new book Riding the Waves: 15 Years of Cinemalaya, a complete guide to the colorful history of the country’s biggest independent film festival.

To the benefit of Cinemalaya 2023, the film festival is also expanding its cinematic boundaries through the Cinemalaya Film Lab, a three-month-long film-laboratory mentorship program happening from September to November 2021.

So don’t miss out on the upcoming Cinemalaya this year, as well as its other initiatives that promise a brighter future for the festival and our independent filmmakers!

For more updates and information, visit the CCP and Cinemalaya websites.

—
All photos are courtesy of Cinemalaya.

Looking For Rafflesias And Other Fleeting Things

The Dust In Your Place