“I’m more of an indie film person,” she adds. “However, I absolutely loved the script. It’s rare to see a film like this infused with so much heart.”

In Rampage, primatologist Davis Okoye (Dwayne Johnson), a man who keeps people at a distance, shares an unshakable bond with George, the extraordinarily intelligent, silverback gorilla who has been in his care since birth. But a rogue genetic experiment gone awry mutates this gentle ape into a raging creature of enormous size. To make matters worse, it’s soon discovered there are other similarly altered animals. As these newly created alpha predators tear across North America, destroying everything in their path, Okoye teams with a discredited genetic engineer (Naomie Harris) to secure an antidote, fighting his way through an ever-changing battlefield, not only to halt a global catastrophe but to save the fearsome creature that was once his friend.

Question: What drew you to Rampage and to the character of Kate? 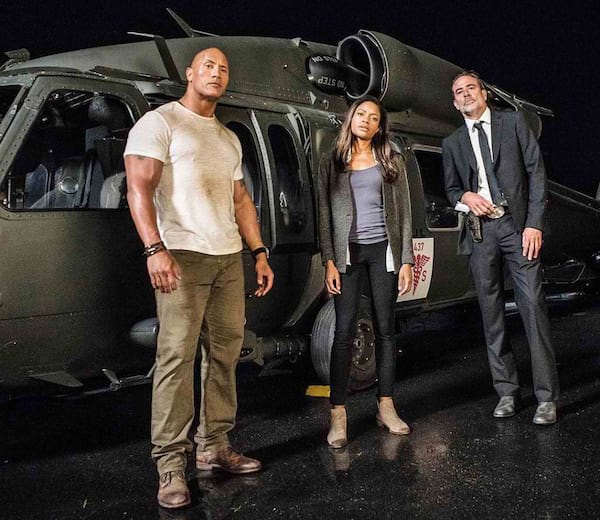 Naomie Harris: I was in the middle of promoting Moonlight and was being perceived as the character I played in that film, Paula. I always like to play completely different characters, to surprise myself and have a varied body of work. The role of Kate in Rampage is a million miles away from Paula, and I wanted to do something fun and playful and lighthearted.

I also connected with Kate because I empathized with her journey and her desire to make a difference in the world and to right the wrong that she has created – a pathogen that has become weaponized.

Q: How was it to work opposite Dwayne?

Harris: It was wonderful working with Dwayne because he has such incredible charisma. His million-watt smile lights up an entire room. You can’t help but be charmed and moved by it. Dwayne brings such commitment to the set that it changes the energy there. Everybody’s spirit is lifted. That was delightful to see.

Q: For many of your scenes with George the gorilla, you work opposite performance capture artist Jason Liles. What was it like working with Jason?

Harris: Jason gave us so much and really helped us connect with George. At first, I didn’t realize we were going to have the privilege of working with an actor playing George. I thought we would have a cardboard cutout as our point of reference. So, it was amazing to have Jason there, because he gave us all the emotions to react to. And he’s such a brilliant performer. I remember a scene where George is crying. Jason was welling up and his nose was running. He was so in the moment, and we couldn’t help but be moved by him.

Q: What was your favorite moment on the set of Rampage?

Harris: Every day was amazing, thanks to [director] Brad Peyton, who has such passion for the film. He reminds you that the heart of our work lies in giving the audience an emotional experience, as well as taking them on a ride. Every day working with Brad was phenomenal. He has more energy and passion than any other director I’ve worked with.

Behind the scenes, the entire Rampage crew was so helpful and supportive, and I developed a special relationship with my hair and makeup team. I also had the privilege of having all my friends and all my family visit our set in Atlanta, stay with me, and meet Dwayne, which was an amazing moment for them. He was so generous with his time, and took photos with all of them. They won’t forget that experience, and neither will I!

Q: What do you hope audiences take away from Rampage when they see it?

Harris: It’s a fun popcorn movie, and two hours in the cinema that will transport you on a great adventure. You’ll experience thrills, some laughs, and be moved by it, as well. You will have a great time with Rampage.