Formulaic, ‘Midnight Sun’ Says Nothing New for the Genre

‘Midnight Sun’ feels formulaic and offers nothing new to the genre. Even the music, which is a big part of Katie’s character, fails to touch or inspire.

The romance drama trope of the affliction love story has been done before. Still fresh off of my mind is last year’s ‘Everything, Everything’, and even if I thought the movie wasn’t very good ‘Love and Other Drugs’ with Anne Hathaway and Jake Gyllenhaal also come to mind and that was back in 2010. The most classic example of this genre of romance dramas would be ‘A Walk to Remember’ which had the fantastic chemistry of Mandy Moore and Shane West to push through the Nicholas Sparks story of a sick girl who falls in love with a boy.

Midnight Sun (based on the Japanese film ‘Taiyo no Uta’) has a very similar hook to ‘Everything Everything’, where the lead character, Katie (Bella Thorne), suffers from the disease Xeroderma Pigmentosum (or XP), which means sunlight could kill her. Without any possible treatment or cure, Katie has lived her whole life indoors, homeschooled by her father (Rob Riggle), writing songs on her guitar, and hanging out with her one and only friend, Morgan (Quinn Shephard). 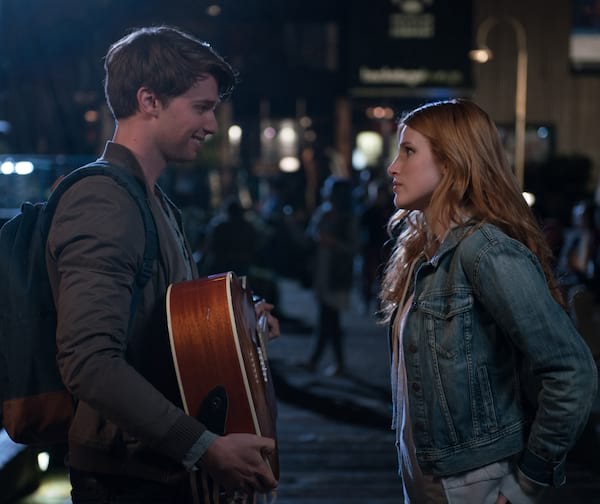 From her tinted windows, she watches the world outside but not with jealousy or bitterness. There is a calm acceptance of her lot in life. And from that vantage point, she falls for Charlie (Patrick Schwarzenegger), who passes by her window every day to go to school.

On graduation night, she asks permission to play on the train station and while she’s busking, she catches the attention of Charlie, who happens to be walking by and their love story begins.

Director Scott Speer takes Katie’s calm acceptance as the general mood of his film. There is no real conflict that is ever really grappled by the narrative. There is mention of the other kids in the neighborhood making fun of her and calling her a vampire, which she somehow manages to hear from her window in her room, but it is never explored. There is a flirty student who throws herself at Charlie but that leads nowhere either.

Thankfully, there is no rebellion arc when Katie and Charlie start to see each other. She has permission from her father to see him. The only real cause for alarm is that Katie refuses to tell Charlie about her condition. There is a lot of explanation of how she wants to be a normal girl in his eyes but there is nothing in this story that shows us that he would not like her otherwise. 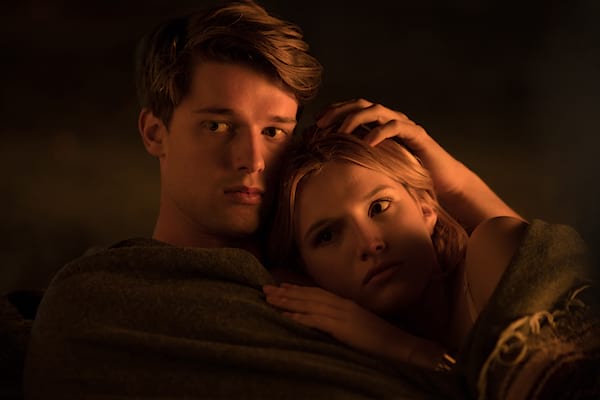 It’s this lack of conflict within the first two acts of the story that makes ‘Midnight Sun’ feel like an exercise in wish fulfillment. It doesn’t help that Thorne and Schwarzenegger don’t seem to have any real chemistry. Their first meeting is so awkward that it is hard to imagine that he would fall for her. The inner world of the other characters — the dad or Morgan or even Charlie — is never explored fully so they all feel like their purpose is just to help push the story forward.

It’s only when the story hits its second act turning point when Katie’s secret comes out that things get dramatic but everything happens by the numbers. It’s predictable and easy.

‘Midnight Sun’ feels formulaic and offers nothing new to the genre. Even the music, which is a big part of Katie’s character, fails to touch or inspire.

On a personal level, I love affliction romance dramas. I suffer from a condition myself and these kinds of movies affect me strongly, no matter how badly done they are. But ‘Midnight Sun’ fails to dig deep and emerges hollow and bare.

A Film To Remember: 5 Reasons Why 'Midnight Sun' Will Be Your Favorite Heart-Wrenching Teen Romance

Brought to us by the folks of 'A Walk To Remember,' the movie looks like something we'll be falling in love and breaking our hearts with. Ready your Kleenex and your feels, as we give you all the reasons this is your next favorite romantic film.

After being diagnosed at a very young age, Katie Price (Bella Thorne) has lived with an incurable genetic disease, Xeroderma Pegmentosum.
0