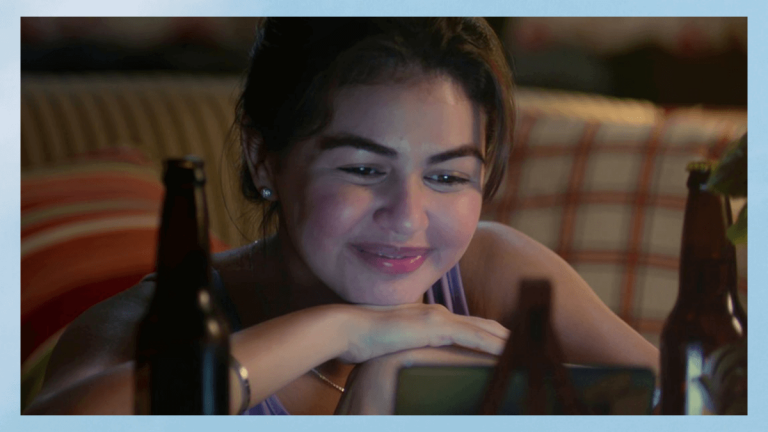 What makes this work so much is the incredible chemistry of all its actors, from Janine Gutierrez and JC Santos to the supporting cast.

‘Dito at Doon’ is a film that truly captures the spirit of the pandemic without being blatant in its messaging. By focusing squarely on two disparate characters who fall in love without actually meeting and containing the whole story within their experiences, the movie amplifies the little nuances of how the lockdown has stripped away all the little things we have taken for granted. It’s a quiet film that showcases incredible restraint from its actors, director, writer, and the rest of the creative team and delivers an unexpected sucker punch that truly encapsulates the realisation of loss despite not being badly affected by the ravages of the pandemic.

It’s a simple movie but writers Alex Gonzales and Kristin Barrameda and director JP Habac find verisimilitude in its razor sharp focus on the subject matter. With a running time of roughly 90 or so minutes, ‘Dito at Doon’ navigates the way in which we have all adapted to this “new normal” through technology; finding both joy and sadness in equal measure in the little things.

Everything we’ve gone through has somehow managed to find its way into the film. It’s two protagonists, Len and Caloy, couldn’t be any more different. Len is a postgraduate student taking online lessons while living practically alone as her single mom works as a nurse in a hospital. The two live in a huge house and Len has become so used to living alone that she talks to herself, talks to her plants, lets out her emotions on social media, and meets up with her two friends, Mark and Jo, online while drinking.

It is in one of these e-numans that she meets Mark’s friend Caloy. Caloy is a delivery man for a courier service, who is working in Manila to help provide for his family in Cebu. Unlike Len who does not leave the house, his work puts him at risk and his less privileged circumstances have given him a different worldview.

The film begins with Len’s and Caloy’s heated exchange on social media. But the moment they meet, something happens and their world suddenly gets bigger and smaller at the same time.

Habac expertly navigates the many interactions of this movie using theatrical techniques. We know they are talking over the phone or video calls, but clever musical cues and wonderful camera work by Kara Morena bends space. Conversations are happening with the characters present in the same scene. Fully utilizing film language, Len and Caloy or Len and her friends are together in their scenes, but we know they are talking through technology.

‘Dito at Doon’ really captures what our lives have been like this past year: how are relationships have been diluted to interactions on a screen and we’ve come to take it as the best we can have at the moment — at least for these characters who seem to be more aware of the current situation and take safety protocols a lot more seriously than most people — and by doing this highlights what we have lost during the pandemic.

What makes this work so much is the incredible chemistry of all its actors from Janine Gutierrez and JC Santos, who plays Len and Caloy, to the supporting cast that comprises Victor Anastacio, Yesh Burce, and Lotlot De Leon. Each of them instills their characters with a history and an energy that never feels scripted, bouncing off of each other with such precision that the screen sizzles with their every interaction. Most especially from Gutierrez and Santos who really sell the love story. These two characters are falling in love and we are seeing it happen despite the world around them being completely foreign and new in the time of the lockdown.

There are so many issues that a movie set in the pandemic could tackle. ‘Dito at Doon’ does hint at them through dialogue when the characters end up expressing their anxieties and fears, but the movie stays focused on the individual experiences of Len and Caloy. And by doing so, it does an even better job at touching upon certain truths. It’s a quiet film. It’s a simple film. But this movie will be one of those we will point to ten years down the line when we want to show people what it was like for us when we want future generations to understand what we went through.

Because ‘Dito at Doon’ is about the little things that eventually wear us out and the little things that bring us joy. We found time to laugh and get angry and even fall in love while stuck in our homes and dreading the news report of the day. It’s all chronicled in this film — that sense of helplessness and stasis.

And without overtly being political, just the character design of Len and Caloy and how different their individual problems are, which in turn creates its inevitable ending that hits like a punch to the gut without any fanfare. It’s such a masterful move by Habac and the screenwriters and excellently portrayed by Gutierrez and Santos. There’s no need to underline it. We know it when it happens and this is why this film is something we have to keep for future generations to see.

––
Dito at Doon is now streaming. Rent and access the movie via ktx.ph, Cinema ’76 @ Home, iWant TFC, and Ticket2Me. 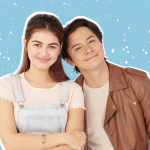 WATCH: Janine Gutierrez and JC Santos on Life During Lockdown

In this exclusive interview, Janine Gutierrez and JC Santos share how they deal with the trolls and haters on the internet.
Share your comment at ClickTheCity Connect