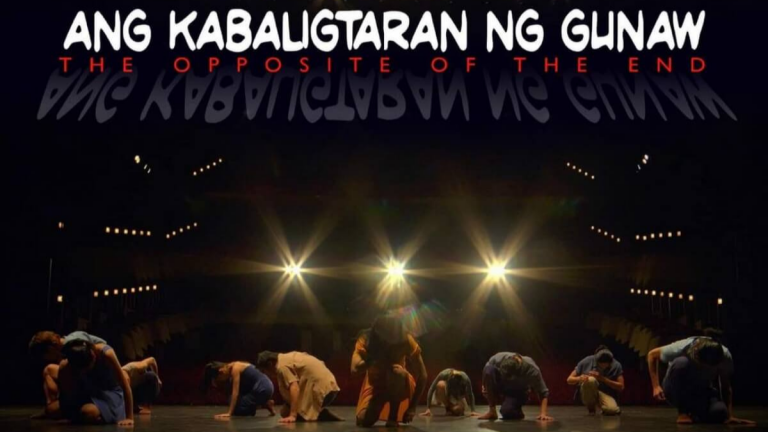 Within its 8-minute time frame, the film captures the struggles of the performing arts in the pandemic and how even in the midst of this struggle, they push back and hard.

I really miss live theater and ballets. In the first minute and 15 seconds of Jerrold Tarog’s dance film of Rodelson Yadao’s concept and choreography ‘Ang Kabaligtaran ng Gunaw’ (based on the poem Eljay Castro Deldoc), the film proves that no one misses it more than the performers themselves.

Set in the empty CCP main theater, the film captures the despair of live performers with no audience to perform for; the cast, comprised of members of the Cultural Center of the Philippines Dance Workshop, perform to an audience of none. The camera zeroes in on the featured dancer, Eloisa Jessa Tangalin, all dressed for a performance but we capture her sadness.

The CCP main theater is empty.

But as Deldoc’s poem draws out the end, he offers hope that “the opposite of the end is creation.” Yadao’s choreography then takes a turn while the music shifts gears and a quick cut returns our dancers on stage but dressed in less formal dance wear. They wear masks and with renewed verve, they break from the stage and dance in the audience side.

Within its 8-minute time frame, the film captures the struggles of the performing arts in the pandemic and how even in the midst of this struggle, they push back and hard. The camera placements and movements highlights how the performing arts have moved towards online means to showcase their work and their talent. They have had to adapt to survive, even film.

What I truly enjoy about Tarog’s direction is that his camera work isn’t too busy or flashy. Most dance films (I’m talking about you ‘Step Up’) put more emphasis on film than on dance, rather than seeking cohesion of the two elements. There are aspects of the choreography that get lost by a busy camera.

But Tarog holds the camera steady at the right moments to showcase the movements, the blocking, the dancers’ skills. He moves it along with the dancers on stage and becomes part of the choreography only when it is part of the storytelling. Dance films should be equal parts dance and cinema. I need to see the dancing and this is what Tarog gives us.

It’s just 8 minutes but it strikes a chord with me who really misses live performances whether it’s ballet, hiphop, theater, or even concerts. But even as the world has gone still due to the pandemic, Deldoc’s poem along with Yadao’s choreography and Tarog’s music and direction, we are reminded to not give up. To constantly create.

Because if we don’t, then it’s truly the end.

––
Ang Kabaligtaran ng Gunaw was broadcasted by CNN Philippines on February 14, 2021. The Cultural Center of the Philippines (CCP) plans to have a hybrid outdoor screening tagged as Cinema Under the Stars at the CCP grounds. There will also be an online premiere through the CCP social media accounts (official Facebook page and YouTube channel).