The magical adventure tells the spine-tingling tale of 10-year-old Lewis Barnavelt (Owen Vaccaro ofDaddy’s Home) who goes to live with his eccentric uncle in a creaky old house with a mysterious tick-tocking heart.

In the tradition of Amblin classics where fantastical events occur in the most unexpected places, Jack Black (Jumanji: Welcome to the Jungle, Goosebumps) and two-time Academy Award® winner Cate Blanchett (Blue Jasmine, Thor: Ragnarok) star in The House with a Clock in Its Walls, from Amblin Entertainment.

The magical adventure tells the spine-tingling tale of 10-year-old Lewis Barnavelt (Owen Vaccaro ofDaddy’s Home) who goes to live with his eccentric uncle in a creaky old house with a mysterious tick-tocking heart.  But his new town’s sleepy façade jolts to life with a secret world of warlocks and witches when Lewis accidentally awakens the dead.

Based on the first volume in the beloved children’s series of books written by John Bellairs and illustrated by Edward Gorey, The House with a Clock in Its Walls is directed by master frightener Eli Roth and written by Eric Kripke (creator of TV’s Supernatural). 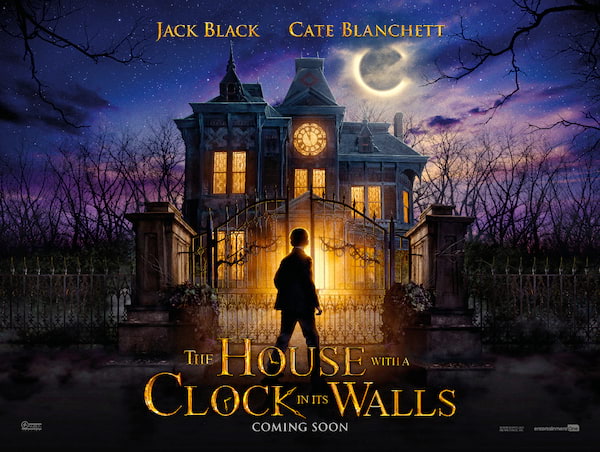 For producer Bradley J. Fischer, it was important to assemble production partners and a director who could do justice to the delightfully weird—but oh-so-accessible—stories of Bellairs.  They would be none other than legendary Amblin Entertainment and director Eli Roth, who knows a thing or two about scaring audiences.  “Amblin brings this story to life in a natural envelope, and Eli was a natural choice to direct,” Fischer gives.  “I always wanted to make one of these movies with a kid at the center who goes on an adventure.  This was a perfect combination of enthusiasm, passion and talent.”

Roth, who has built a career based on much darker scares, was drawn to this PG story for myriad reasons.  It wasn’t just a chance to make the type of movie he had always dreamed of making, it was the shot to partner with Amblin, whose films had arguably some of the biggest influence on him as a child and burgeoning filmmaker. 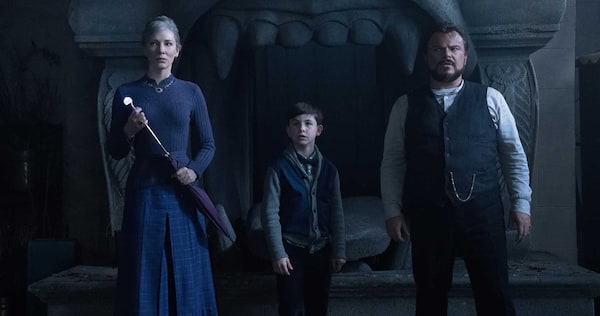 The director walks us through an introduction to this world: “There are certain things that give this story an Amblin feel, and I wanted to come out and make the next great Amblin movie.  I want The House with a Clock in Its Walls to be side-by-side with Gremlins and Back to the Future.”  He’s not worried about making younger audiences nervous about the things that go bump in the night.  “I wanted this movie to be very scary, and I think that you can have funny and scary at the same time.  Gremlins showed that, and E.T. did as well.”

For the director, his lifelong interest is in exploring the best and the worst of humanity…as well as the manner in which we handle crisis.  Do we rise to the occasion, or do we crumble?  For him, Lewis’ story of heartbreak and healing allows that.  “How do you deal with and process tragedy?” Roth asks.  “This is a story about terrible things happening, and some want to deal with it by moving forward while others want to turn back time so it never can happen.” 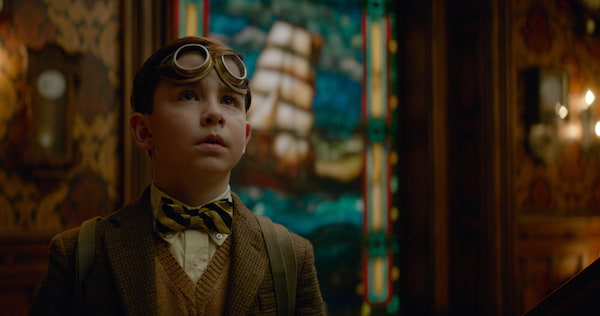 The filmmaker has long had a desire to shoot “a scary kids movie.”  He reflects: “I wanted to do something that felt like Gremlins, E.T. or Time Bandits—something fantastic and Halloween-themed.  This story had pumpkins; it had automatons.  There were so many ingredients and elements in the book and script that I connected to.  Especially Lewis, this misfit kid.  I did not grow up an orphan, but I certainly grew up an outcast and an outsider.”

Roth shares that perhaps some of the best direction he’s ever received was from the head of Amblin himself, a man who knows a thing or two about genre blending.  “I told Steven Spielberg what a seminal experience Poltergeist was for me as a kid, and I wanted to give a new generation of kids those same thrills.  “He gave me amazing advice.  He said: ‘Don’t design it so much that people can’t get into the story.  And most important, make it scary.  Kids love to be scared.’”

In Philippine cinemas September 19, The House with a Clock in Its Walls is distributed by United International Pictures through Columbia Pictures.  Follow us on Facebook atwww.facebook.com/uipmoviesph

The House with a Clock in its Walls

Fantasy Film, The House with a Clock in Its Walls, Opens in Cinemas Today

It is based on the 1973 novel of the same name by John Bellairs!

Cate Blanchett, A Powerful Witch in "The House with a Clock in Its Walls"

Two-time Academy Award® winner Cate Blanchett stars as Florence Zimmerman, one of the most powerful witches on Earth, in Universal Pictures’ fantasy adventure The House with a Clock in Its Walls where fantastical events occur in the most unexpected places

Watch the "Black Magic Jack!" Featurette for "The House with a Clock in Its Walls"

Universal Pictures has just unveiled a new featurette titled “Black Magic Jack!” in celebration of its upcoming fantasy adventure The House with a Clock in Its Walls.

WATCH: Something Wicked in First Trailer of "The House with a Clock in its Walls"

Check out its newly-launched trailer and teaser poster below and watch "The House with a Clock in Its Walls" in Philippine cinemas October 24.