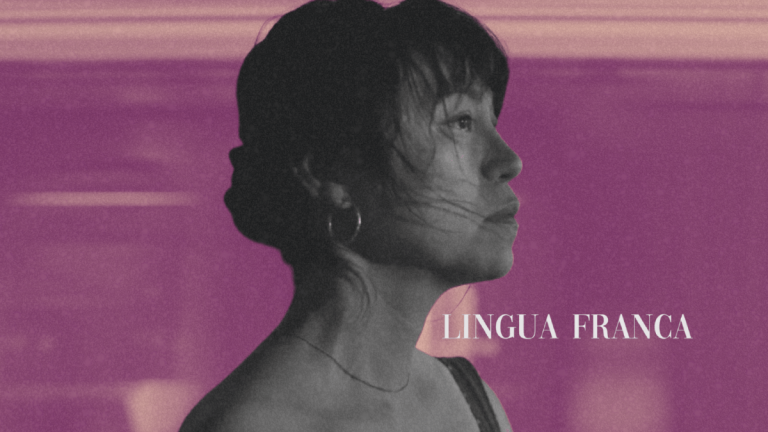 You can stream it at home starting November 19.

The film follows Olivia, a trans Filipina who works as a caregiver for a woman with dementia in New York during Trump’s term. Having no documents, Olivia has this looming fear that she would one day be picked up by the authorities. When the man she was supposed to pay for a green card marriage backs out, she finds a romantic connection with Alex, the grandson of the woman she’s caring for.

While having its intimate moments, the film mostly dwells in a grim spirit, successfully communicating Olivia’s feeling of dread and fear to the audiences. Set in the Russian-Jewish community of Brighton Beach, Brooklyn, the film established early on that feeling of isolation with gloomy takes of static sceneries– from an empty train station to the lonesome boardwalk at the beach. Lingua Franca is such a quietly emotional movie that tackles the struggles of both transsexuals and immigrants in an America led by Trump.

The film is headlined by Isabel Sandoval, the writer and director of the movie who also plays its main character. Sandoval herself is trans Filipina immigrant who has lived in the US for 13 years when she made Lingua Franca.

“About two years after I made [the film] Aparisyon was when I had my transition. And as I was undergoing that, I came up with the idea for Lingua Franca,” shared Sandoval during a virtual press conference. She said that initially, the film was supposed to be a straightforward romantic drama between Olivia and Alex. But halfway through writing the script, the 2016 Presidential election happened and Trump won.

“I think similar to what a lot of minorities living at the US at that time, I was feeling a lot of apprehensions, anxiety, and just vulnerability about my situation as an immigrant in the US[..]. And it was during that time when the final premise of Lingua Franca kicked into place. Olivia is, now more specifically not just an immigrant but an undocumented immigrant who’s trying to look for a path to citizenship during a time of escalating arrests and deportations.” Sandoval explained.

Lingua Franca is Sandoval’s third feature film, the first two being Señorita (2011) and Aparisyon (2012). The film premiered at the Venice International Film Festival in 2019 and has been in nearly a hundred festivals since then, garnering positive reviews and awards including the top prize of the Bentonville Film Festival 2020.

Earlier this year, the film screened at theaters in France, and soon landed on Netflix in North America and Canada.

This November 20, Lingua Franca will reach more Filipino audiences when it finally drops at Cinema ’76 at Home. Access to the film is priced at P250, making it available for 4 days. Once you start the film, you’ll have 48 hours to finish your viewing. You may also pre-order now for only P200.

For this film, Sandoval was joined by stars Eamon Farren (The Witcher, Twin Peaks), Ivory Aquino (When We Rise) and Lynn Cohen (The Hunger Games: Catching Fire).