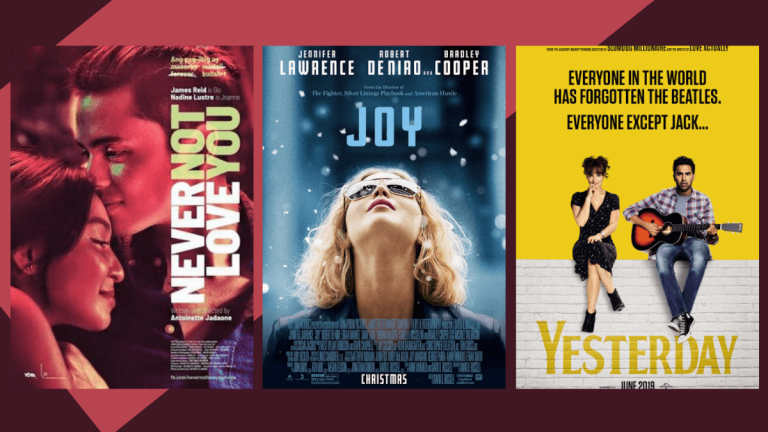 Isn’t it a bummer when you see your favorite movie already playing halfway through when you turn on the TV? Fret not! From rom-com and action to horror and thriller, we’re giving you a heads up on all the must-watch movies on TV from November 16 to 22, 2020.

Just The Way You Are
(4pm, Cinema One)
Drake bets his best friend that he can make a nerdy new student fall in love with him within 30 days.

The Intern
(6:15pm, HBO)
Ben Whittaker, a 70-year-old widower, realises that he is not cut out for retirement. He then applies to become a senior intern for a sceptical boss at an online fashion site.

Date Night
(10:35pm, FOX Movies)
Phil and Claire lead a routine, almost dull life of a suburban couple with kids. An attempt to spice up the date night with a bit of excitement and glamour turns into more thrills than they asked for.

The Breakup Playlist
(3pm, Cinema One)
A story about an aspiring professional singer and a rock singer who collaborates in a song. As they work on their song, they start to develop feelings for each other.

Charlotte’s Web
(3:30pm, HBO)
After learning that a young pig’s days are numbered, a literate spider (Julia Roberts) weaves an elaborate plan to save her friend from the butcher’s block.

The Maze Runner
(9pm, FOX Movies)
Thomas loses his memory and finds himself trapped in a massive maze called the Glade. He and his friends try to escape from the maze and eventually learn that they are subjects of an experiment.

Joy
(10:20am, HBO)
Despite facing several hardships, Joy Mangano, a divorced mother of two, rises against all odds and sets up a successful business empire.

Toy Story 3
(1:35pm, FOX Movies)
Before Andy leaves for college, his toys are mistakenly delivered to a day care centre. Woody convinces the other toys that they were not dumped and leads them on an expedition back home.

The Hows of Us
(9pm, Cinema One)
A young couple dream of growing old together as they deal with the struggles of being in a long-term relationship.

The Avengers
(9pm, FOX Movies)
Nick Fury is compelled to launch the Avengers Initiative when Loki poses a threat to planet Earth. His squad of superheroes put their minds together to accomplish the task.

The Mall, The Merrier
(1:15pm, PBO)
Two siblings fight for ownership of their parents’ mall.

The Time Traveler’s Wife
(3:20pm, HBO)
Henry DeTamble, a librarian, possesses a unique gene that lets him involuntarily travel through time. His wife, Claire Abshire, finds it difficult to cope with it.

X-Men Origins: Wolverine
(3:40pm, FOX Movies)
After years of working as a mutant mercenary, Logan lives a quiet life with his girlfriend, Kayla. However, a figure from his past brutally assassinates Kayla, compelling Logan to seek vengeance.

Ang Dalawang Mrs. Reyes
(7pm, Cinema One)
Devoted wives Lianne and Cindy got cheated on by their husbands who turn out to be gay.

Maybe This Time
(1pm, Cinema One)
Steph learns to be tough and sets her sights on bigger dreams after Tonio ends their relationship without saying goodbye.

Forrest Gump
(2:45pm, HBO)
Forrest, a man with low IQ, recounts the early years of his life when he found himself in the middle of key historical events. All he wants now is to be reunited with his childhood sweetheart, Jenny.

Tooth Fairy
(3:35pm, FOX Movies)
A hockey player breaks a little girl’s heart when he tells her that there is no tooth fairy. Soon, he is summoned to the fairy world and punished to serve two weeks as a real-life tooth fairy.

Freedom Writers
(6pm, Cinemax)
Erin Gruwell teaches a class of at-risk students who are divided by their race and harbour animosity against one another. Soon, she decides to unite them and pursue education beyond high school.

The Da Vinci Code
(6:35pm, HBO)
Symbologist Robert Langdon travels from Paris to London to unravel a bizarre murder. Accompanied by a cryptographer, he soon comes across a religious enigma protected by an age-old secret society.

Meet the Parents
(10:30am, HBO)
Greg Focker decides to spend a weekend with his girlfriend’s parents before proposing to her. However, her father instantly dislikes Greg, which makes his stay far worse than he imagined.

Star Wars: The Force Awakens
(12:30pm, FOX Movies)
Thirty years after the defeat of the Galactic Empire, Han Solo and his young allies face a new threat from the evil Kylo Ren and the First Order.

Meet the Fockers
(1:15pm, HBO)
Greg Focker and his fiancee Pam decide to make their respective parents meet before their wedding. However, the Fockers’ relaxed attitude does not go down well with Pam’s family.

Tomb Raider
(2pm, Cinemax)
Lara Croft, a courageous and independent young woman, sets out on a dangerous journey to unravel the truth behind her adventurer father’s mysterious disappearance.

Meet me in St. Gallen
(2:30pm, PBO)
Celeste and Jesse have a one-night stand and then go their separate ways, only to end up meeting again in St. Gallen, Switzerland.

Little Fockers
(3:05pm, HBO)
A strict and old-fashioned patriarch, Jack Byrnes, is unhappy with his son-in-law, Greg, when he takes up a second job at a drug company. So, he wants him to prove his capability by testing him.

Yesterday
(1:30pm, HBO)
Jack Malik is a struggling singer-songwriter in an English seaside town whose dreams of fame are rapidly fading, despite the fierce devotion and support of his childhood best friend, Ellie. After a freak bus accident during a mysterious global blackout, Jack wakes up to discover that The Beatles have never existed.

Never Not Love You
(5:15pm, PBO)
Two young lovers meet and fall in love. Together they build a life until career opportunities bring them out of the country. Out of the comforts of home and with individual careers going different directions.