Despite its Gorgeous Moments, ‘Kung Paano Siya Nawala’ Can Leave You Cold with its Tempered Restraint

I wanted to love this film. JM De Guzman and Rhian Ramos are wonderful in it but except for some moments of pure brilliance and utter beauty, the sum is not equal to its parts.

In ‘Kung Paano Siya Nawala,’ director Joel Ruiz manages to successfully show the life and the pain of a man who suffers from face blindness, a condition that leaves Lio (played by JM De Guzman) unable to recognize faces unless he sees them constantly. Ruiz manages to mine this condition for all its pathos while exploring the double-edged sword of remembering and forgetting, the pain that comes with loss.

It’s a wonderful concept that is expertly mined by Ruiz and De Guzman to create a character that is so afraid to get attached due to his fears of abandonment. How does a man hold on to a memory of a person he cannot remember? But without that pain, how does he experience loss?

It’s a wonderful thesis for a romantic drama as Lio begins his new job at a small call center agency and runs into the flighty, free-spirited Shana, played by Rhian Ramos. She’s unbelievably frank and forward and their romance is a whirlwind that makes up most of the 106 minute running time, the highs and lows of this relationship where letting go is the equivalent of complete and utter loss.

Interestingly enough, while Lio needs something constant to hold on to, something that won’t disappear so easily, Shana is an evanescent creature, estranged from her family, and comfortable being alone as she is trying to find herself. If any couple needs to hold on to each other the most, it is these two people.

The film takes a languid tone, taking its time to put all the pieces together building this relationship and making it tangible and real. De Guzman and Ramos have amazing chemistry and they are their best when they are portraying the quiet and candid moments of a couple getting to know each other.

The film is unapologetically glued to their faces, almost mirroring Lio’s need to memorize faces so that he won’t forget. De Guzman and Ramos are gorgeous individually, and even more so together, as they make Lio and Shana’s devotion to each other palpable.

Completing the picture is Lio’s family. Agot Isidro plays his mother who bounces from one lover to the next, always in the midst of pain from her latest breakup, a wonderful contrast to Lio, who is incapable of harboring any real attachments because he cannot put a face to the feeling. We see what Lio’s capacity for love is like when he’s with his sister Lexy, played by Barbara Ruaro.

There’s so many great things about this movie, most especially when Ruiz deals with visualizing the face blindness and how it motivates Lio’s and Shana’s relationship to the full spectrum of love and insecurity and demands and jealousy.

The film, though, feels afraid to engage fully with the drama. It’s so measured and tempered that it feels distant from diving deep into the emotions of the scenes. It’s pulled back to not become maudlin or sentimental, but in the end it feels cold and restrained. There’s an absence of energy or urgency, and the film takes such a steady pace that it oftentimes feels drawn out. This is a character driven piece and so it feels plotless, and the lack of direction makes the film seem aimless.

I wanted to love this film. JM De Guzman and Rhian Ramos are wonderful in it, but except for some moments of pure brilliance and utter beauty, the sum is not equal to its parts. Its slow pace and lack of urgency kept me from fully engaging with the piece. The film touched me more intellectually than it did emotionally, and this a film that I would have wanted to feel more. It left me cold when I wanted to be crying at the very end. 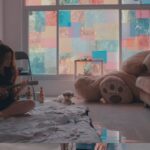