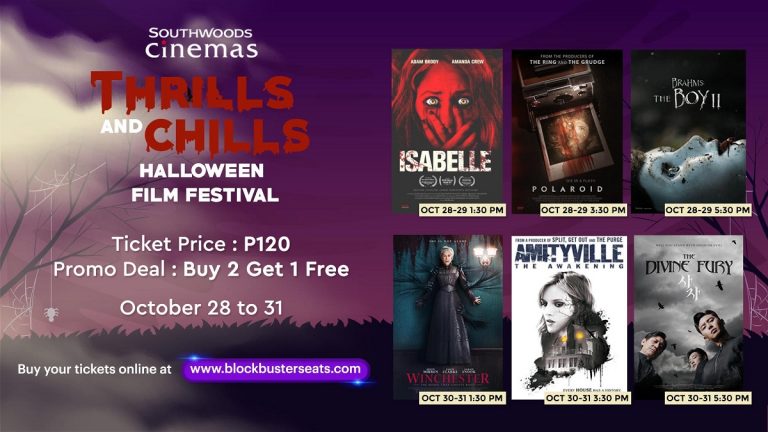 Southwoods Cinemas is treating moviegoers this Halloween with their favorite horror and thriller films, plus exciting movie deals and discounts through its Thrills and Chills Halloween Festival.

Running from October 28-31, the film fest features some of the biggest horror films to date and gives movie buffs a chance to enjoy discounted movie tickets for as low as P120 per head and other exclusive promos.

Walk-in patrons can avail ‘Buy 2 Get 1 Free Ticket’ deals when they purchase movie tickets and treat their movie buddies on the same date of the ticket purchase. The free tickets are valid at the same movie and screening time.

Isabelle (Oct 28 – 29 | 1:30 PM)
Isabelle released in 2018 is a Canadian-American award-winning horror movie by Robert Heydon, where a young couple’s dream of starting a family shatters as they descend into the depths of paranoia. Starring Adam Brody (Matt Kane) and Amanda Crew (Larissa Kane), they must struggle to survive an evil presence that wants nothing more than their very own lives.

Polaroid (Oct 28 – 29 |3:30 PM)
Polaroid released in 2019 centers around high school introvert, Bird Fitcher played by Kathryn Prescott, who received a vintage Polaroid camera from a friend. It doesn’t take long to discover that those who have their picture taken with it, soon die. Directed by Lars Klevberg based on his 2015 short-film in the same title.

Brahms: The Boy II (Oct 28-29, 5:30 PM)
Released in early 2020, Brahms: The Boy II is an American supernatural horror film starring Katie Holmes, Ralph Ineson, and Owain Yeoman. As the family moves into the Heelshire Mansion, their young son soon makes friends with a life-like doll called Brahms. A stand-alone sequel to the 2016 film The Boy, it is directed by William Brent Bell and written by Stacey Menear, the respective director and writer of the original film.

Winchester (Oct 30-31, 1:30PM)
Winchester is a 2018 supernatural horror film directed by Michael and Peter Spierig, which narrates the story of eccentric firearm heiress Sarah Winchester played by Helen Mirren. Ensconced in her sprawling San Jose, California mansion, she believes she is haunted by the souls of people killed by the Winchester repeating rifle.

Amityville: The Awakening (Oct 30-31, 3:30PM)
From the producers of Get Out and The Purge, Amityville: The Awakening is a 2017 American supernatural horror film and the tenth sequel of the Amityville Horror series released in 1979. After Belle played by Bella Thorne learns that her new house was a site for a mass murder in 1974 and her brother who is in a comatose state comes back to life, she gets suspicious and believes that he is possessed.

The Divine Fury (Oct 30-31, 5:30PM)
Released in 2019, The Divine Fury starring Park Seo-joon, centers on the story of a champion fighter who finds himself in an otherworldly battle against evil forces that wreak havoc in the human world after waking up with mysterious wounds on his hands.

Southwoods Cinema is located at the third level of Southwoods Mall in Southwood City, Binan, Laguna. It boasts of four state-of-the-art digital cinemas equipped with the latest sound and theater technology including Dolby Atmos theaters for a more immersive cinematic experience.

To ensure a #SaferandHappier movie experience, Southwoods Cinemas is implementing stringent health and safety measures including the following initiatives:

For more information, log on to Megaworld Cinemas on Facebook or book your tickets in advance at www.blockbusterseats.com