Vanellope Meets the Disney Princesses in “Ralph Breaks the Internet”

It was a scene that the filmmakers always felt was a keeper. Says co-director Phil Johnston, “Putting Vanellope in a room with all of the Disney princesses was funny from the get-go, considering her unapologetic personality and laid-back outlook. And as it turned out, Vanellope is on a coming-of-age journey, so her encounter with the princesses was integral to the completion of her arc in the film.”

Filmmakers invited the original voice talents to return to the studio to help bring their characters to life. The royal reunion included Irene Bedard (Pocahontas), Kristen Bell (Anna in Frozen), Jodi Benson (Ariel in The Little Mermaid), Auli’i Cravalho (Moana), Linda Larkin (Jasmine in Aladdin), Kelly Macdonald (Merida in Brave), Idina Menzel (Elsa in Frozen), Mandy Moore (Rapunzel in Tangled), Paige O’Hara (Belle in Beauty and the Beast), Anika Noni Rose (Tiana in The Princess and the Frog), and Ming-Na Wen (Mulan). “We were able to get just about everyone who’s still with us to reprise their roles,” says Johnston. “As each actress came in to record her lines, we invited her to sit with the animators and talk about her character.”

Says co-director Rich Moore, “It was intriguing how much the characters are a reflection of those actresses. These women have a deep connection to their characters, and to witness their very personal presentations was really moving.” 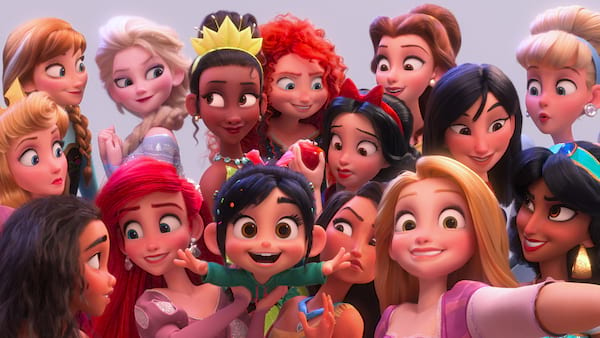 Besides turning to the princesses' original voice talents, the Ralph Breaks the Internet: Wreck-It Ralph 2 team studied the original films, adopting many of the princesses' iconic poses. They also headed to Disneyland, where they learned about the princesses' individual gestures and quirks from the ladies who play the Disney princesses almost on a daily basis.

Also a big help was animator Mark Henn, who was the original supervising animator for six of the princesses—Ariel, Belle, Jasmine, Mulan, Pocahontas, and Tiana. Henn also contributed to the animation of Frozen's Anna and Elsa.

Henn, the hand-drawn animation supervisor for this sequel, says, “The princesses are still the characters we love, we’re just seeing a different side of them. The key is finding the balance. They’re backstage where they can behave like regular girls—just hanging out—but we still had to maintain their personalities.”

“I love seeing the princesses ‘off-duty,’ relaxed and cozy in a way we’ve never pictured them before,” says Mandy Moore, who reprised her role of Rapunzel for the film. “It gives us a deeper glimpse into their lives and a peek behind the curtain.”

Join the conversation online and use the hashtag #RalphBreaksTheInternet

In Ralph Breaks the Internet: Wreck-It Ralph 2, video-game bad guy Ralph (voice of John C. Reilly) and best friend Vanellope von Schweetz (voice of Sarah Silverman) leave the comforts of Litwak’s arcade in an attempt to save her game, Sugar Rush. Their quest takes them to the vast, uncharted world of the internet where they rely on the citizens of the internet—the Netizens—to help navigate their way. Lending a virtual hand are Yesss (voice of Taraji P. Henson), the head algorithm and the heart and soul of the trend-making site “BuzzzTube,” and Shank (voice of Gal Gadot), a tough-as-nails driver from a gritty online auto-racing game called Slaughter Race, a place Vanellope wholeheartedly embraces—so much so that Ralph worries he may lose the only friend he’s ever had. Directed by Rich Moore (Zootopia, Wreck-It Ralph) and Phil Johnston (co-writer Wreck-It Ralph, Zootopia, writer Cedar Rapids), and produced by Clark Spencer (Zootopia, Wreck-It Ralph, Bolt, Lilo & Stitch), Ralph Breaks the Internet: Wreck-It Ralph 2 hits Philippine theaters on Nov. 21, 2018.

John C. Reilly is Back to "Break the Internet" in "Wreck-It Ralph 2"

Q&A with Josie Trinidad, Head of Story of Disney's 'Ralph Breaks the Internet'