‘How to Train Your Dragon: The Hidden World’ Introduces Light Fury, a Shimmering Dragon

When Toothless first encounters the Light Fury —a stunning and shimmering all-white dragon who exists on pure instinct—our alpha male finds himself pulled to the wild world from which she comes and will assuredly return.

When director-writer Dean DeBlois considered the engine of change for DreamWorks Animation’s "How to Train Your Dragon: The Hidden World", he began to wonder what coming-of-age would look like for the Night Fury aka Toothless…as the dragon grows to yearn for a life beyond humans.

“For so long, he has been Hiccup’s constant companion,” says the director. “But he has begun to stray from that bond as he is drawn by the call of the wild—and by instinct and maturity.” To stay true to the narrative, the storytellers had to contemplate the unthinkable. “We asked ourselves if we could have their relationship completely fall apart, but still bring them back together, stronger than ever,” DeBlois says.

Once Toothless first encounters the Light Fury (so named by Astrid)—a stunning and shimmering all-white dragon who exists on pure instinct—our alpha male finds himself pulled to the wild world from which she comes and will assuredly return.  “Toothless is conflicted by loyalty, but he’s drawn to what is so natural,” says DeBlois. “For him, that’s embodied by the Light Fury; she offers an innocent existence untainted by humans.”

That said, DeBlois admits that any stranger breaking up our star couple had to be both likable and spectacular. “The Light Fury promises a family and the propagation of Toothless’ species,” he says. “She’s essentially there to lure Toothless back into the wild and to his rightful home. To make sure the audience is not resentful of Light Fury, we had to give her such a charming and distinct personality that she’d win us over. These are wordless transitions in animation, and imbuing her with these characteristics required our hitting familiar marks for humans.”

One of the more iconic moments in The Hidden World was one of the first sequences to be led into production: Toothless and Light Fury’s first date on the beach. Set to playful, romantic chords from series composer John Powell, the scene is primarily music-driven and largely a dance. While Toothless fumbles through his amateurish knowledge of the opposite sex, he must rely upon the creature in his life who loves him more than any other: Hiccup.

Toothless first captures the attention of his feral love by adopting a behavior he learned from humans, specifically Berk’s new chieftain. “We based this on the story of Cyrano de Bergerac and gave it a lot of love and care,” DeBlois says. “Hiccup encourages Toothless to replicate dragon courtship behaviors he’s observed. Still, this is a stunning female of the wild who expects Toothless to know what he’s doing. Of course, he’s a bumbling amateur…with Hiccup cringing on the sidelines.”

So what’s a dragon to do when he’s head-over-heels in love? “Toothless has no references; he’s the last of his kind, and there’s underlying sadness to that,” DeBlois says. “Ironically, the one thing he learns from a human—drawing in the sand—is what wins her over.” 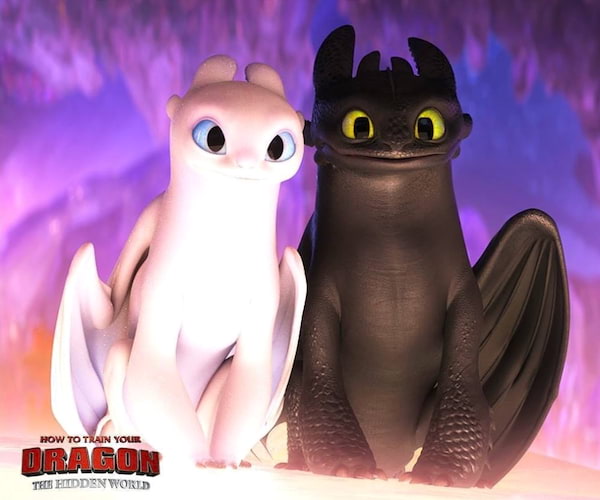 In Philippine cinemas February 20, How to Train Your Dragon: The Hidden World is distributed by United International Pictures through Columbia Pictures.  Follow us on Facebook at https://www.facebook.com/uipmoviesph/. Use the hashtags #HowToTrainYourDragon and #HTTYD3

About "How to Train Your Dragon: The Hidden World"

From DreamWorks Animation comes a surprising tale about growing up, finding the courage to face the unknown…and how nothing can ever train you to let go.  What began as an unlikely friendship between an adolescent Viking and a fearsome Night Fury dragon has become an epic adventure spanning their lives.  Welcome to the most astonishing chapter of one of the most beloved animated franchises in film history: How to Train Your Dragon: The Hidden World.

Now chief and ruler of Berk alongside Astrid, Hiccup has created a gloriously chaotic dragon utopia.  When the sudden appearance of female Light Fury coincides with the darkest threat their village has ever faced, Hiccup and Toothless must leave the only home they’ve known and journey to a hidden world thought only to exist in myth.  As their true destines are revealed, dragon and rider will fight together—to the very ends of the Earth—to protect everything they’ve grown to treasure.

For How to Train Your Dragon: The Hidden World, series director Dean DeBlois returns alongside the all-star cast led by Jay Baruchel (This Is the End), America Ferrera (Ugly Betty), Kit Harington (Game of Thrones), Cate Blanchett (The House with a Clock in Its Walls, Thor: Ragnarok), Gerard Butler (Den of Thieves, Geostorm), Kristen Wiig (Ghostbusters), Craig Ferguson (Doc Martin), and F. Murray Abraham (Homeland) as the villain Grimmel.

How To Train Your Dragon: The Hidden World

How to End a Trilogy: a Review of ‘How To Train Your Dragon: The Hidden World’

Harington joined the How to Train Your Dragon series in the second film, voicing the Viking Eret, the self-proclaimed finest Dragon Trapper alive.

As the trilogy comes to an end, author Cressida Cowell has a lot of feelings when it comes to saying goodbye to Hiccup and Toothless' chapter.

WATCH: Here's Your 60-Second Referesher Course on 'How To Train Your Dragon' 1 and 2

Before you dive into the next installment "How to Train Your Dragon: The Hidden World," fly through the first two films in just 60 seconds with this newly released featurette.

WATCH: Epic Tale Soars in "How to Train Your Dragon 3' Trailer

Universal Pictures and DreamWorks Animation have launched the teaser trailer of How to Train Your Dragon: The Hidden World, the epic conclusion to the beloved trilogy.

Teaser Poster Up for "How To Train Your Dragon: The Hidden World"

From DreamWorks Animation comes the highly anticipated culmination of one of the most popular animated franchises in film history, How to Train Your Dragon: The Hidden World.
0