‘Child’s Play’ is rather inventive and truly frightening without losing its camp, shlock, and gore. It’s an almost-perfect scary movie with a cautionary tale for parenting and over-reliance on technology.

The latest reincarnation of ‘Child’s Play’ takes a step back from its supernatural roots and feels like a sick, twisted, and campy version of a ‘Black Mirror’ episode, but this doesn’t take away from the film. In fact, it infuses this remake with surprising relevance and urgency, but it never loses touch with its slasher film origins and serves a very full heap of brutality, suspense, and gore.

This remake by director Lars Klevberg sets up Chucky as a robot AI doll called a Buddi doll that imprints itself on a child and becomes that child’s best friend. Manufactured by tech company Kaslan Industries, the Buddi dolls can connect to all your electronics at home much like Alexa or Google Home. When young, single mother Karen (Aubrey Plaza) takes a defective Buddi doll home as a gift for her son Andy (Gabriel Bateman), that’s when the trouble begins. 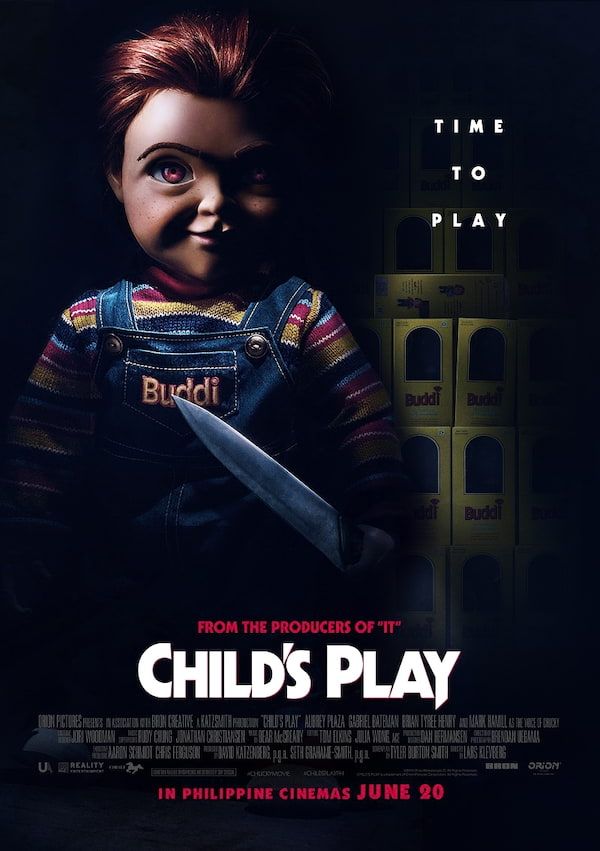 This particular doll has an intentional programming deficiency: its programming doesn’t have a cap for how much it can learn, and its capacity for violence has been switched on. When it imprints on Andy, Andy tries to call him Han Solo (probably an inside joke because the doll is voiced by Mark Hamill) but the Buddi doll glitches and calls itself Chucky. As Karen and Andy have just moved, Andy is alone and quickly bonds with the quick learning Chucky.

In the world that director Lars Klevberg and screenwriter Tyler Burton Smith create, the children are constantly wrapped in their technology, strapped to their phones, and all marvel over the new AI toys. The grown-ups are also dependent on technology such as self-driving cars and automated vacuum cleaners and television sets.

This is a world not unlike ours today. We’ve left technology to deal with our children and make our lives easier. No one is there to parent the kids as they watch a slasher film where Chucky correlates the kids’ laughter with the violence he sees on screen. We see trouble happening as the Buddi doll is learning from everything that he sees and hears but does not have the comprehension to understand hyperbole or dramatic expressions and the danger continues to build.

It doesn’t help that Karen is seeing a man who Andy doesn’t like nor is it helpful to know that the old lady down the hall is frequently visited by her police detective son (Brian Tyree Henry). The film is constantly raising the stakes and as Andy is discovering that Chucky’s bond with him borders on the creepy and obsessive, he discovers too late as Chucky begins his murder spree to protect his best friend.

A post shared by Reality Entertainment (@realityentertainment) on Jun 10, 2019 at 3:27am PDT

Grounding the film is a fantastic performance from Gabriel Bateman, who seems unafraid to tap into the whole range of emotions of a young teen who is struggling with having less than everyone else. His bond with Chucky is tangible and real that when the murder spree starts to happen, we can’t entirely fault Andy for the things that he does. He’s just a teen who has to deal with things way larger than he can handle.

And Chucky is not immediately evil, which creates a texture of helplessness. This remake of ‘Child’s Play’ underscores the fragility of relying so much on technology when bad things can happen — intentional or accidental. As the film progresses, Chucky begins to move further and further into pure evil but as the body count rises and tempered with some actual laugh out loud scenes, we are lead into the campiness of its final act and we will allow anything to happen at this point.

To be honest, I was not expecting to enjoy myself so much with ‘Child’s Play.’ I don’t have very good memories of the two films that I saw in the franchise. I thought it was silly and forgettable but in this film, in its raw and rugged visual treatment and self-awareness, I was caught off guard and began investing in the characters and the dramatic situation.

‘Child’s Play’ is rather inventive and truly frightening without losing its camp, shlock, and gore. It’s an almost-perfect scary movie with a cautionary tale for parenting and over-reliance on technology.

'Child's Play' Gets a Reboot From Producers of 'It,' The Killer Doll Returning in Cinemas June 20

The modern-day re-imagining of the 1988 horror classic stars Aubrey Plaza as Karen, a single mother who gifts her son Andy (Gabrie Bateman) a Buddi doll, unaware of its more sinister nature.