Today, Kesha drops “Best Day (Angry Birds 2 Remix)” via Kemosabe/RCA Records, encapsulating the carefree spirit of the season and suggesting we take a walk in the sunshine, dance with our friends and embrace the day to the fullest. Featured in The Angry Birds Movie 2 (out August 21st in the Philippines via Sony Pictures Animation in association with Rovio Entertainment), “Best Day (Angry Birds 2 Remix)” is pop music at its most joyful. 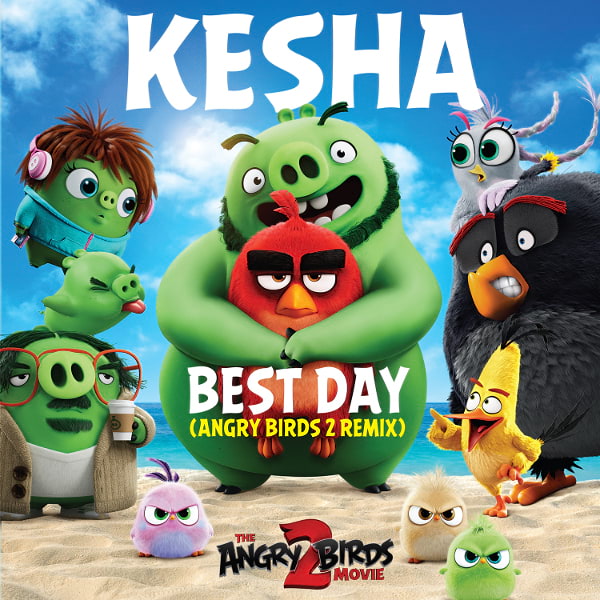 With a smooth vocal performance, funk bass line, beachside vibe, and a mantra-like refrain about seizing the moment and expelling negativity, the song captures what continues to make Kesha one of the pop world’s most refreshing stars: her effortlessly exciting and melodious songwriting, her spirited and earnest vocals, and of course her occasional doses of humor.

Of the inspiration for the track, which Kesha wrote with Wrabel, Ryan Lewis (who also produced the song) and Scott Harris, the singer said “I wanted to write a song that would make people feel GOOD. Life can be hard sometimes, and I wanted to write something to listen to in the morning to remind myself to be happy, grateful, positive and remember that I can choose to have the best day of my life (of my life, of my life). Every day. I also think high fives are great and would like to promote high fives whenever possible.”

“With a movie as colorful, fun, bright and hilarious as The Angry Birds Movie 2, we’re thrilled to have a song that gives a happy musical bounce to the movie,” said Spring Aspers, head of Sony Motion Pictures Music Group. “It’s the kind of song that will make you want to get up and dance right there in the theater.” 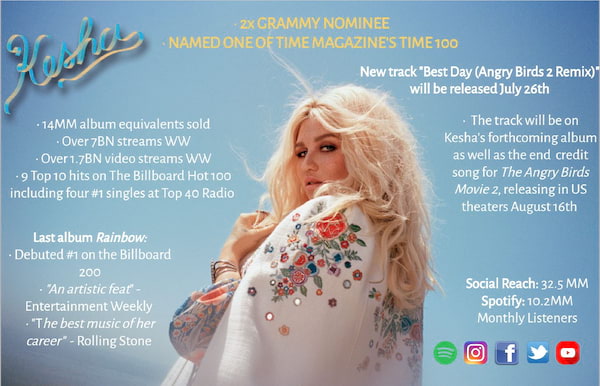 Kesha's latest album 'Rainbow' debuted at #1 on the Billboard 200 chart, was called "an artistic feat" by Entertainment Weekly and "the best music of her career" by Rolling Stone, and earned the singer/songwriter her first GRAMMY nominations. Since the release, she was named one of Time Magazine's Time 100 (their most influential people in the world), released the behind-the-scenes documentary 'Rainbow – The Film' on Apple Music, set sail on her own festival cruise (“Kesha’s Weird & Wonderful Rainbow Ride”) and headlined Dan Reynolds’ LoveLoud Festival. Kesha has sold more than 14 million total album equivalents worldwide, has approximately 6.9 billion audio streams and 1.7 billion video streams worldwide, and has had 9 Top 10 hits on The Billboard Hot 100, including four #1 singles at Top 40 Radio – "TiK ToK," "Your Love Is My Drug," "Die Young," and "Timber."

About “The Angry Birds Movie 2”

The flightless angry birds and the scheming green piggies take their beef to the next level in The Angry Birds Movie 2!  When a new threat emerges that puts both Bird and Pig Island in danger, Red (Jason Sudeikis), Chuck (Josh Gad), Bomb (Danny McBride), and Mighty Eagle (Peter Dinklage) recruit Chuck’s sister Silver (Rachel Bloom) and team up with pigs Leonard (Bill Hader), his assistant Courtney (Awkwafina), and techpig Garry (Sterling K. Brown) to forge an unsteady truce and form an unlikely superteam to save their homes.