The world of G.I. Joe is filled with fantastical sounding military gear.

The world of G.I. Joe is filled with fantastical sounding military gear. Accelerator Suits, Liquid Armor, camouflage that makes you invisible in any environment. It sounds like the stuff of science fiction, but all this equipment is actually closer to science fact. These technologies already exist in some form or another, from concept phase to manufacturing stage. What the ‘G.I. Joe: The Rise Of Cobra‘ filmmakers did was take these technologies and imagine where they would be ten or twenty years from now.

“We set the story in the not so distant future which gave us the license to exploit today’s technological advances,” explains G.I. Joe: The Rise Of Cobra director Stephen Sommers. “We’re taking technology that exists in one form or another and positing where it could possibly go.” 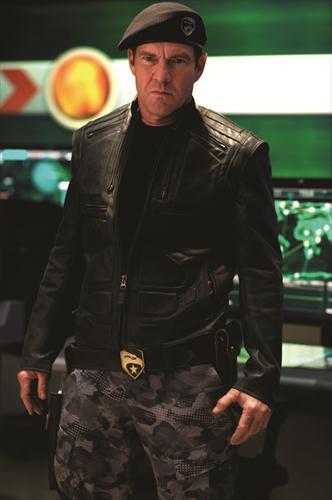 Each of the technologies shown are “things that we all know the military are doing, we just haven’t seen them yet,” adds producer Brian Goldner.

They’re all things we expect to see on the battlefield one day, just not now. “They’re what we call ‘next generation’,” says executive producer David Womark. “It’s kind of like if somebody handed you an iPhone ten years ago. If you looked at it, you could see that it could exist someday, just not yet.”

G.I. Joe: The Rise Of Cobra’s costume designer, Ellen Mirojnick, embraced these ‘next generation’ designs. After first getting acquainted with the franchise, the designer and her team researched the latest military technologies. “They wanted it to give you that same feeling we all had the first time we watched James Bond,” says Mirojnick. “That was thrilling because we saw things we hadn’t seen before, and it was a whole new experience. That feeling was something Stephen was very, very anxious to capture.”

The basic G.I. Joe fighting outfit is a flexible, full body suit modeled on the technology of Liquid Armor. “It’s a high-tech battle suit that’s impenetrable, but you put it on like high-performance skiwear,” Mirojnick explains.

On typical superhero movies, the actor wears an inner muscle suit beneath his clothes. “We didn’t want to do that,” says Mirojnick. So she designed a suit around the idea of Liquid Armor. It is a suit that is sculpted musculature that enables the external anatomy to become liquid armor. The concept was to put the muscles on the outside.” 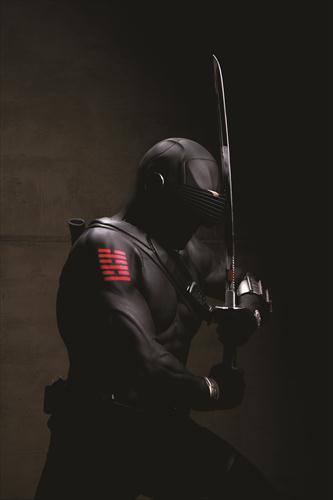 Although the costumes may look hyper-real, liquid armor is far from fantasy. Army scientists and engineers are developing liquid armor to help save soldier’s lives. The body armor is light and flexible. It wears like normal clothes so that a soldier still has a full range of movement that allows him to run or aim his weapon. But the armor contains something called a shear thickening fluid, which is made up of hard nanoparticles suspended in a non-toxic, non-evaporating liquid.

Normally, this combination flows like a liquid, but if hit by a bullet, knife or explosive fragment, the nanoparticles in the liquid cluster together and jam. The suit goes rigid and keeps the projectile from penetrating the armor. The impact disperses the force of a sudden blow over a wider area of the body. The principle is similar to that of chainmail armor but it’s significantly lighter.

Currently, they’re testing liquid armor by integrating it into Kevlar vests but some day, the plan is to use this technology to protect a soldier’s entire body. It won’t be difficult to get soldier’s to wear these suits if they look anything like they do in G.I. JOE. The Liquid Armor suits were quite popular with the cast, particularly the male cast members. Says Mirojnick, “Some of the boys put them on, looked at themselves and said, “Oh, I don’t have to work out and train.”

Sommer’s direction to the G.I. Joe design team was fairly straightforward. “On our first day, he told me, ‘You must create iconic images,’” says costume designer, Ellen Mirojnick. “Those were our marching orders, and we designed from there.” The coolest representation of ‘next generation’ technology mixed with iconic imagery can be seen in the Delta-6 Accelerator Suit.

“We don’t like losing our guys. We respect our men and women in uniform and we hate when we lose them,” says Sommers. “The idea of the future is that you can see how weaponry and the military are going. They’re trying to make it as casualty free as possible. They’re going to have a version of the accelerator suit where our guys are as hard to kill as possible. The accelerator suits are basically the armor of the future.”

In one epic sequence in the film, our heroes, Duke (played by Channing Tatum) and Ripcord (played by Marlon Wayans), chase after the villains, who drive top speed through Paris in a suped-up Humvee. So how does a running man take on a speeding Humvee? An accelerator suit offers a formidable challenge to the all-terrain vehicle.

The Delta-6 Accelerator Suit is a mechanical exo-skeleton that allows the wearer to run at speeds approaching sixty miles per hour. The head to toe turbo-hydraulics and highly pressurize pneumatics enhance the wearer’s ability to run faster, jump higher, and hit harder than humanly possible. The flexible, poly-alloy suit provides lightweight, bulletproof battle armor that allows the wearer to punch through solid obstacles as dense as a brick wall. The suit also boasts an impressive weapons system of fully self-contained firepower.

In addition, the ultra-lightweight aerodynamic helmet has a visor with an advanced cybernetics heads up display (HUD). The transparent display relays laser enhanced LED readouts for scanning and communications information. Vents with intake and exhaust fans circulate air to maintain temperature and oxygen flow.

It sounds like we are in the world of science fiction, but again, the idea is not that far-fetched. “The Department of Defense reps came down and looked at some of our concepts and apparently they’re working on a very similar suit. One which will help soldiers run faster and shield them from ammunition,” explains Womark. “We’re probably ahead of them by six or seven years.”

But the general audience isn’t necessarily aware of this so the trick is to show and use the technology in a way that will make them see that it might be possible. “It’s really part of storytelling,” explains second unit director, Greg Michael. “If you set something up so that an audience can at least understand the mechanics of how it’s supposed to work, and then show it actually working, then they’ll believe it. You want the audience to go along for the ride.”

Mirojnick and her team developed the first concept drawings for the Accelerator Suit, but, as she notes, “We had a terrific concept artist, Matt Codd, who drew it on the first day he was hired and we knew immediately that it was unmakeable.” 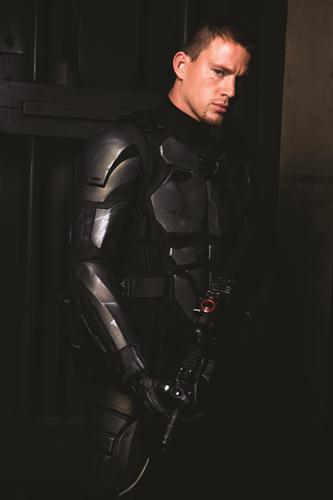 Usually, a design like this is accomplished through animated visual effects but the filmmakers wanted suits that the characters could wear as much as possible, for medium shots, for close-ups, even for some of their stunts. So the filmmakers hired Shane Mahan at the Stan Winston Studio to actualize the design. The challenge was that it had to be cool enough for the fans, but functional enough on the set.

The result was a modular design that allowed the actors to walk, run, sit or otherwise move with the action, which is not to suggest the suits were comfortable. “If hell was a costume, it would be the Accelerator Suit,” Marlon Wayans declares, adding, “The devil probably has one or two in his closet.” Channing Tatum agrees. “They might be the most uncomfortable things ever made, but man they are cool looking.”

Traditional camouflage allows the wearer to blend into their environment, tan colors for the desert, white suits for a snowy environment, brown and green-camo for woodland hiding. But what if the wearer is moving through multiple environments with the same suit. The G.I. JOE Enhanced Camouflage Suit serves the traditional function of blending into the environment through color and pattern but uses technology that allows the wearer to practically disappear no matter what his or her surroundings. In its dormant state, the suit appears as traditional camouflage, but when activated, a computerized enhancement provides a next-gen method of stealth. Taking the concept of camouflage to the extreme, the enhanced camo-suit reflects and refracts light, allowing the wearer to blend into any background and become virtually invisible to the naked eye.

This may sound like the stuff of science fiction, but in fact, the army is deep in development on this technology.

“I was reading about all the future technology coming down the pike in the next five, ten, twenty years from now. It’s amazing,” explains Sommers. “I read this article about the new camouflage suits that the army is developing that uses photography. It will photograph pictures behind you and around you and refract them in front of you. Invisibility is science fiction, but blending in and being camouflaged to that kind of extent where you appear invisible is not science fiction. They will have that in the next ten to twenty years.”

G.I. Joe: The Rise Of Cobra is released and distributed by United International Pictures thru Solar Entertainment Corp. In Cinemas 07 August, Friday