‘Indak’: Marching To Its Own Beat

‘Indak’ is a full-on dance musical with a heavy-dose of fairy tale storytelling techniques and chock-full of dancing and even some musical numbers.

‘Indak’ is actually a surprising film. I’m surprised it’s a musical. For some reason, I wasn’t expecting that. The trailer gave me the feeling that this was a coming-of-age drama set in the dance world. More like ‘Fame’ and less like ‘Teen Spirit.’ But ‘Indak’ is a full-on dance musical with a heavy-dose of fairy tale storytelling techniques and chock-full of dancing and even some musical numbers.

‘Indak’ is also surprising in how it can be so fresh and original in many things and yet still fall into the usual cliches that comes with the territory of these kinds of films. There’s a confidence about the filmmaking that I like, but it also panics mid-way and gives us some of the usual tropes, which don’t feel like conventions but attempts to be relatable.

I liked the film, to be frank, but there are many things about it that are flawed. The dancing is great and the performances are solid. It’s a Filipino musical that is unafraid to be contemporary and modern and unapologetically what it is. It’s a celebration of urban dancing (I hope I got the terminology right) and of embracing change.

My biggest issue with ‘Indak’ is that there are quite a few emerging storylines that fights for dominance in the movie and the fact that it feels so overwritten. The story is threaded together by a verbose narration by Jen (played by Nadine Lustre) as she is about to compete in a dance competition in South Korea with the dance team Indak Pinas. She’s struggling with coming to terms with what she is about to do and the film’s opening images is that there’s a conflict happening within the team and herself and their leader, Vin (played by Sam Concepcion).

Then the story moves into flashbacks showing us Jen’s life in Bantayan island as a tour guide and caring for her mother (the wonderful Yayo Aguila) when a viral video of her dancing on a boat brings Vin to her doorstep and inviting her to join his dance crew. This first act is incredibly long as it becomes a push-and-pull of Jen wanting to stay for her mother and her mother pushing her to chase after her dreams.

When she finally makes the decision to go, she meets the crew and works extremely hard to earn her place with the team to compete in South Korea.

But this is where it gets messy. Directed by the overly lyrical narration, there is the jealous crew member, Steph (played by the captivating Nicole Omillo), who seems to be against her for no clear reason (until a song number comes two-thirds into the movie), there’s a subplot of their competition money disappearing, some characters come out of nowhere with no proper introduction, a whole backstory for Vin that never is really explored and never gets developed into something more, and Jen’s overall uncertainty if coming to Manila was the right decision.

I’m not sure if this is because I noticed five names in the screenplay credit but there’s a lot that’s going on here. These stories take a long while to develop because there’s a whole lot of dancing that happens in-between, which is not a bad thing, except there’s just as much story to work with as well in its almost 2-hour running time.

Of all the storylines, the one that plays out the strongest is that of Jen and her mother and her choice for leaving Bantayan. Had the film just focused on that rather than on all the other stuff, it would have been great and it could keep most of the dances, if not all. But the film gets bogged down by all these under-developed subplots.

And the story takes on a fairy tale narrative which explains why there are lapses in logic (Vin happens to be in Bantayan just when Jen’s video goes viral, the dancers don’t seem to operate under normal financial conditions) but it can have a jarring effect for some viewers.

There’s many things about it that are great: Nadine Lustre, Sam Concepcion, Yayo Aguila, and Nicole Omillo give solid performances for the material they have to work with; the dancing is great (though direction isn’t consistent in capturing all of it, some performances are covered wonderfully while other dances aren’t covered as well). While the film does rely on some cliches, there are many refreshing touches such as supportive friends and family and everyone in the crew is actually quite nice except for Steph and some characters that appear out of nowhere.

But despite all of my misgivings, I think ‘Indak’ is still an enjoyable time in the cinema. It’s long-winded but it’s confident and its different. It embraces its own ideals and is unashamed of its own ambitions. I would have liked it tighter, cleaner but I’m happy that it set out its own beat and danced to it with grace and bravado.

Find showtimes for Indak and book your tickets today! 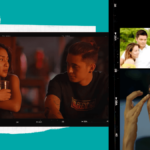 After her win in Famas and Gawad Urian, Nadine Lustre returns to the big screen in 'Indak', where she will be starring with Sam Concepcion.
0