“There’s still the cerebral intrigue and science and suspense of the original stories, but there’s also the brawling and mayhem that is faithfully brought in from the novels,” Law adds. “My great hope is that Conan Doyle fans really enjoy it because I’ve become a huge fan myself and am very respectful of the legacy. I do think we’ve been faithful, but we’ve also injected our characters with dimensions that have never been brought out before.” 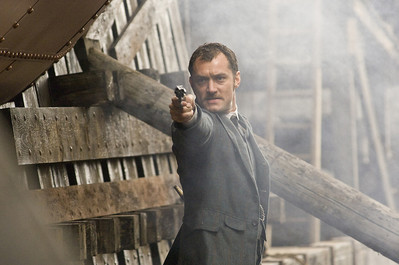 In many ways, the casting of Jude Law as Watson was every bit as crucial as that of Robert Downey as Holmes. “It seems impossible to imagine anyone else being Watson once we cast Jude,” says director Guy Ritchie. “I wanted a good-looking Watson. I didn’t want him to be subservient or inferior, but rather a bit of a hero with an equal partnership with Holmes. I believe that’s to a degree what Conan Doyle was really after.”

Jude Law was familiar with Holmes and Watson since reading the stories as a child and marveled at how much of Watson has been unexplored up until now. “He’s been in a brutal war and has experienced horror and physical pain,” says the actor. “With that military background in mind, I really wanted him to represent the slightly more buttoned-up, polished professional, with Holmes being the slightly more wayward, eccentric dilettante. But Watson is far from just bumbling along; he’s in the middle of the action—sometimes tearing in ahead of Holmes.” 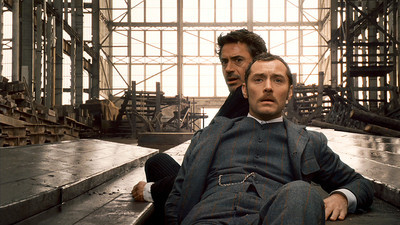 In addition to joining Holmes in his investigations, Watson is also the storyteller in the Sherlock Holmes canon. “If there wasn’t Watson, there would be no Holmes because Holmes never talks about what he does, but Watson is with him every step of the way,” says Downey.

“Watson has always been, and remains, the eyes of the audience watching this great man unravel these extraordinary knots of clues,” Law explains. “He definitely gets his hands dirty in their cases together, but he is also in awe when Holmes just lets loose with his incredible photographic memory or ability to decipher exactly what transpired and how it was done.” 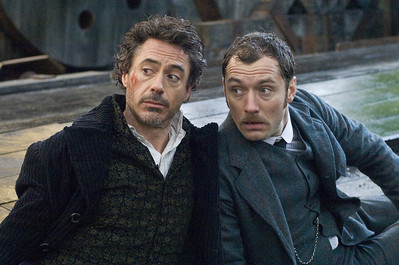 Their friendship plays an important role in both their work and their private lives. “They’re tremendously close and we show how that manifests itself,” Ritchie notes. “There’s a lot of humor in it, some jealousy, but a real affection and sincerity about the partnership. They need each other for balance; Holmes is the creative genius and Watson’s the more temperate and disciplined of the two.”

“Jude has a huge intellect and love of the game,” Downey adds. “The second we met, we just started bouncing ideas off each other. We were very much on the same page, which is a pretty eccentric page. He really knows what he’s doing and yet he’s also very open to letting things flow. We really worked as a team to do justice to these characters and their friendship.”

“I think the essence I wanted to bring—and what I know Guy and Robert looked to me for—was a yin, if you like, to Holmes’s yang,” Law comments. “Robert and I talked a lot about how we could balance out each other’s characters so that together they make a perfect whole, and many of the descriptions of the two of them in the books convey that they are incredibly powerful together because they support each other so, and their friendship is so deeply rooted. We could also at times be incredibly humorous because there’s a part of Holmes that infuriates Watson and vice versa.”

Opening across the Philippines on Friday, January 8, “Sherlock Holmes” is distributed by Warner Bros. Pictures, a Warner Bros. Entertainment Company.