In this engaging, funny and uplifting family film, he stars as a hockey player turned tooth pixie for a week.

Dwayne “The Rock” Johnson returns to family comedy in The Tooth Fairy as a hockey player turned tooth pixie for a week with Ashley Judd, Stephen Merchant, Julie Andrews and Billy Crystal.

In this engaging, funny and uplifting family film, Dwayne Johnson stars as Derek Thompson, a tough, hard-hitting and arrogant hockey player. Essentially a good guy, he seems to be a little too sure of himself. Known in the game as ‘The Tooth Fairy’ because he has a tendency to knock the teeth out of his opponents, he is totally lacking in humility. He has a great deal of presence as well as talent, but he doesn’t believe in dreams and has lost faith in himself. All in all, he has a negative outlook on life and has lost his way in his career. Derek is neither thoughtful nor tactful and we see him early on, dashing the hopes and dreams of a young fan and autograph hunter as well as his girlfriend’s children. 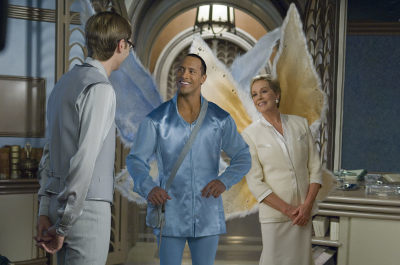 As a result of his attitude, he’s sentenced to two week’s hard labor in ‘Fairyland’, where he has to answer to a serious charge: killing dreams. The legendary Julie Andrews plays the Chief Tooth Fairy. British comic actor Stephen Merchant is hilarious as Tracy, the scrawny administrative fairy who must make sure Derek fulfills his sentence properly.

Johnson himself makes a highly unusual Tooth Fairy – complete with wings and magic wand. Due to a wardrobe malfunction we briefly see this muscular macho athlete in a pink tutu – then he is given his own male fairy suit (which is shiny blue) mortifying and highly embarrassing for a tough guy like Derek. He ends up in all kinds of trouble and hilarious escapades as he learns how to make children’s dreams come true, rather than crushing them.

In traditional tooth fairy style, his job is to visit the homes of children who have lost their baby teeth and placed them under their pillows. In exchange for the tooth, the fairy traditionally leaves some money. As the new Tooth Fairy learns the tricks of his new trade, he becomes adept at the job and learns some valuable life lessons. In the process Derek gets back in touch with his own dreams and goals too.