Johnny Depp, the Mad Hatter in ‘Alice in Wonderland’

The epic fantasy adventure marks the seventh collaboration between Burton and Depp since they first worked together on 'Edward Scissorhands.'

Disney’s 3D epic fantasy adventure “Alice in Wonderland” marks the seventh collaboration between Tim Burton and Johnny Depp since they first worked together on “Edward Scissorhands.”

“It’s amazing,” says Depp, “having worked with Tim coming up on 20 years, I’ve had the opportunity to see him grow. He’s so unique and so special and such a brilliant filmmaker. Anything Tim wants me to do is a real honor.” 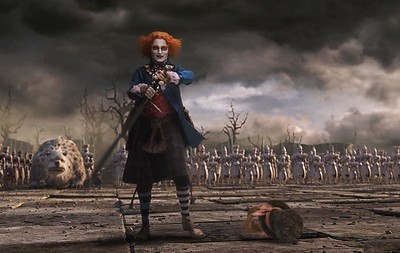 In the film, Depp plays the Mad Hatter who doesn’t just wear his heart on his sleeve—his ever-changing moods are quite literally reflected in his face and his attire. He’s been anxiously awaiting Alice ’s return and is, arguably, her one true friend, believing in her when nobody else does. He is fearless, going to great lengths to protect her at his own risk. Once the proud hat maker for the White Queen, the Hatter has been affected by mercury poisoning, an unfortunate side effect of the hat-making process, and isn’t altogether well.

“I always saw the Hatter as kind of tragic,” says Depp. “He’s a victim in a lot of ways. The mercury has certainly taken its toll, but there’s a tragic element to his past in this particular version that weighs pretty heavily on the character.” 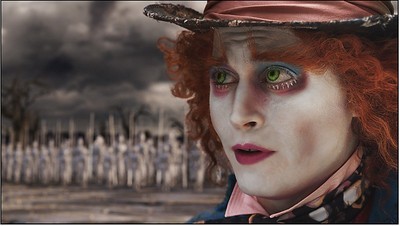 The Hatter offered Depp the opportunity to create yet another unique character. “It was a real challenge to find something different, to define the Mad Hatter in terms of cinema,” he says. “One of the things Tim and I talked about early on, is the idea that he would be so pure, in the sense that you see, instantly, what he’s feeling—so much so that his clothes, his skin, his hair, everything, reflects his emotion. So when he’s beaming, you get this kind of bright effect and everything comes to life, like a flower blooming, very, very quickly. He’s like a mood ring. His emotions are very close to the surface.” 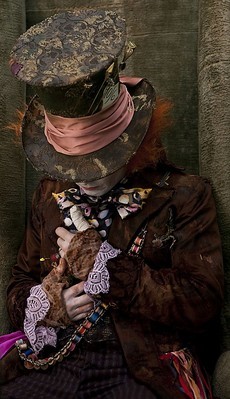 “He has an ability for transformation that is fabulous,” says producer Richard Zanuck of Depp. “There’s no one who can do these crazy, offbeat, eccentric characters like Johnny can. He has a way of being funny and crazy, yet poignant. He’s one of the world’s great actors; he takes bigger chances than any other male star.”

As the actor developed the character, Depp discovered that the hatters of the period often suffered from mercury poisoning. “The term ‘mad as a hatter’ actually came from real hatters when they were making these sort of beautiful beaver-pelt top hats,” he says. “The glue they used had very high mercury content. It would stain their hands; they’d go goofy from the mercury and go nuts.” 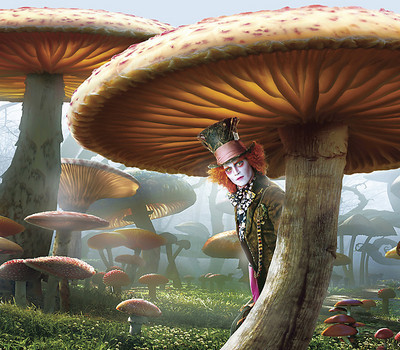 Depp felt his character’s entire body, not just his mind, would be affected by the mercury poisoning, and painted a watercolor of the Hatter with orange hair, a clown-like face, and green eyes of different size. “I just knew what he looked like for some reason,” he says of the Hatter’s final look. “When I went into the makeup trailer the process just sort of happened. It’s very rare that everything works so quickly. The only time I’d ever had that happen on that level was with Captain Jack.”

Depp also thought the Hatter would have several distinct personalities and accents. “It seemed to me also that because he would be so hyper-sensitive, he would need to travel into another state, another personality, to be able to survive, which kicks in when he is threatened or when he’s in danger. I thought it would be like experiencing a kinder form of personality disorder in a way.”

Opening across the Philippines on Thursday, March 4, “ Alice in Wonderland” is distributed by Walt Disney Studios Motion Pictures International.