Zachary stars as Greg, a “deeply flawed character but likeable.”

The best-selling book series “Diary of a Wimpy Kid” by Jeff Kinney which won at the recent Nickelodeon’s Kids’ Choice Awards over the “Harry Potter” and “Twilight” series is now a major motion picture from 20th Century Fox. 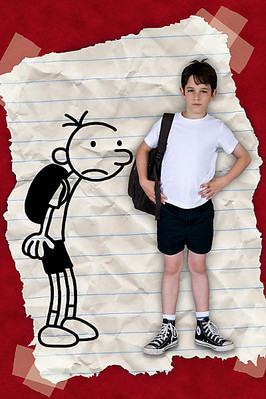 From the pages of the best-selling book series, the Diary of a Wimpy Kid movie reels on Greg Heffley (played by Zachary Gordon) thinking middle school is the dumbest idea ever invented. For him, middle school is filled with oodles of morons and worst, bullies. As Greg tries to survive the never-ending ordeal and attain the recognition and status he feels he so richly deserves, he devises an endless series of his daily mischief by penning it on paper. His diary as his mother calls it and that which Greg prefers to be called journal is filled with his ideas, judgment and stories of family and school ordeals that serves as his gateway for magnified emotions and ideals of a teen trying to fit in and prove something.

Zachary Gordon who plays the titular role of the wimpy kid Greg Heffley has notably appeared in “Four Christmases” with Vince Vaugh and Reese Witherspoon and “National Treasure: Book of Secrets” along with Nicolas Cage. He also lent his voice in “Madagascar 2: Escape to Africa” as the voice of Baby Melman. His other film credits include “The Brothers Bloom,” “Lower Learning,” “Sex and Death 101” and “Georgia Rule.”

With his first starring role in “Diary of A Wimpy Kid,” Zachary enthusiastically related to Anthony Breznican of USA Today about how they tried to prep his look – “This was amazing, because I had to get tons and tons of haircuts. “They had to get it just perfect. They were looking at the book and looking at my hair, and trying to make three sprigs in the back stand up. His costume also doesn’t have much wiggle room to imitate the slender stick character. They put on short and really tight clothes, like these skinny jeans. I had to wear them around town to get used to them.”

Jeff Kinney also serves as a consultant all throughout the movie’s production. He defines his anti-hero, Greg as a “deeply flawed character but likeable.” During the course of the production, Kinney stresses the importance of preserving Greg’s voice, which he characterizes as a balance of cockiness and powerlessness. “I pushed for him to be a likeable jerk. One of my favorite things is Greg doesn’t learn his lesson all the time,’ explains Kinney.

Greg “is pretty lazy, so I have to act like that,” Zachary continues. “I have to act competitive and really self-centered. By reading the books and thinking about Greg … he always thinks everything revolves around him. He thinks the world is just about him.”

While some are raising their eyebrows on Greg’s character, Zachary has just but a few words of (youngster’s) wisdom to enlighten the cynical: “Everybody has Greg inside him. Their worst parts are him. That’s how they relate to him, and he also has a little bit of a conscience, in some ways.”

The movie is directed by Thor Freudenthal whose credits include the kiddie films “Hotel for Dogs,” “The Haunted Mansion” and “Stuart Litte 1 and 2.” It also stars an outrageous cast of comedic talents Steve Zahn, Rachael Harris, Chole Grace Moretz, Devon Bostick and Robert Capron.

“Diary of A Wimpy Kid” opens April 3 (Black Saturday) in theaters from 20th Century Fox to be distributed by Warner Bros.