‘The Bounty Hunter’- An Action-Comedy with Romance

Jennifer Aniston and Gerard Butler star as the warring ex-couple.

Centering on a struggling New York bounty hunter tasked with dragging his ex-wife back to jail, Columbia Pictures’ new romantic, action-comedy The Bounty Hunter teams up Jennifer Aniston and Gerard Butler as the warring ex-couple. 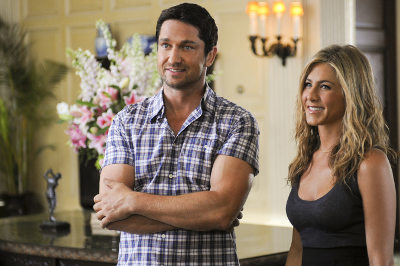 “Milo Boyd, played by Gerard Butler, is a down-on-his luck bounty hunter – he used to be a policeman, but got himself booted off the force, and now he’s just making ends meet,” producer Neal Moritz explains. “He gets the assignment of his life – his ex-wife, played by Jennifer Aniston, has jumped bail, and he’s got to find her and bring her back.”

“It’s just the two of them, on the road,” says director Andy Tennant. “Catching her is easy; bringing her to justice is a bit more challenging.” 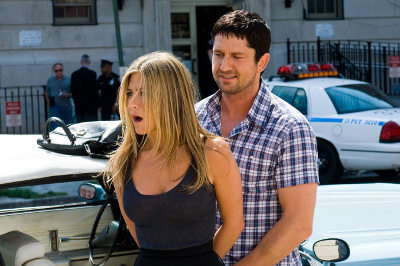 “Milo Boyd was a great cop back in the day. But he could let things get the better of him – including his ex-wife, Nicole,” Butler says of his character’s background. “When they got divorced, he lost his way a little bit, even got himself booted off the police force. So he’s now become a bounty hunter, and honestly, he’s not doing too great. He sleeps on a buddy’s sofa half the time. He’s just trying to convince himself that he’s happy.

“I took one look at this script, and I loved it. It was sharp, hilarious, edgy, and it was on,” Butler continues. “I laughed from start to finish and I thought, ‘I wanna play that guy.’”
Though Jennifer Aniston’s character, Nicole, seems more put together, she secretly carries just as much baggage as her ex wears on his sleeve.
“She’s a reporter and he was a cop, so they would break down cases and stories together,” says Aniston. “Somehow or another, as relationships do if you get lazy, they just stopped paying attention, and the things that they loved about each other become the things that they are annoyed with.”

“Nicole is a reporter for the Daily News and she’s skipped a hearing in order to chase a story. So, yeah, she’s a felon,” says Aniston. “And now Milo has the opportunity of a lifetime to track her down and bring her to jail, which for him is like a dream come true.”

“He thinks this is the best day of his life,” Butler continues. “He’s hugely excited. Of course, that’s where it all goes wrong.”
“That’s what’s fun about watching this story – as Milo is chasing Nicole, he gets involved in pursuing the story she’s trying to break,” Aniston remarks. “So they get back into the beauty of what the fun of what their relationship was.”
“Usually relationships end, you never see the other person, there’s never any closure,” says executive producer Ori Marmur. “In this case, Milo blames Nicole for ruining his life and this is his chance for that closure. It doesn’t work out like he planned.

“Andy had to craft a movie about two people who are at each other’s throats, but we as the audience know they should obviously be together,” Marmur adds. “ Milo and Nicole are perfect for each other, but they can’t see it. So, through the bickering and through the fighting, they have to start falling in love as well. Andy really did a great job executing that.”