The day Scarlett Johansson first donned her super-heroine suit on the set of ‘Iron Man 2‘ she stopped director Jon Favreau and the visiting executives from Marvel Comics in their tracks.

Johansson plays the demure Natalie Rushman (Natasha Romanoff) who becomes Tony Stark/ Iron Man’s new assistant when Pepper Potts (Gwyneth Paltrow) is promoted to CEO of his company. But Rushman is hiding a shocking secret and later in the story reveals herself as The Black Widow.

The actress first tried on the Black Widow’s suit some four weeks before production started on Favreau’s eagerly awaited follow up to the first Iron Man, which enjoyed huge critical acclaim and box office success in 2008.

“I did the camera test in the suit to see what it looked like and that was kind of terrifying because I wasn’t quite in the shape that I wanted to be,” she says. “And then maybe a month later it was finally ready.”

In the interim Johansson had embarked on a strenuous exercise campaign and pushed her body into peak condition. “It was painful,” she laughs. “But worth it in the end.”

It certainly was and judging by the reaction to her appearance in full Black Widow garb that day on set, Johansson is set to stun audiences, too. 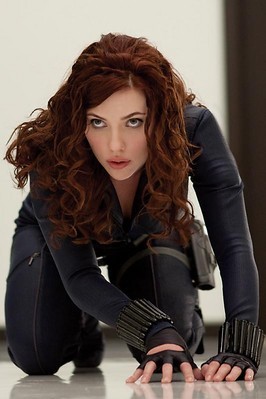 “I remember putting it on and I thought it looked really great. Mary Zophres (costume designer) did a fantastic job and just nailed it,” she says. “It was comfortable and you know, I was worried that I wasn’t going to be able to move around in it but it was totally utilitarian.

“And I remember all the Marvel guys being there, and Jon being there and they were just like ‘wow!’ I was kind of walking around in a circle and it was like ‘that looks great…’

“And it’s such a powerful thing to wear – it’s skin tight, it’s got the bracelets, a gun on one belt and these little discus things. It’s no joke, I mean you just can’t take not take the character seriously because she looks like she means war.”

Johansson was delighted to join the Iron Man 2 production because, she says, she is a huge fan of the first movie that tells the origin story of how playboy arms dealer Tony Stark – played superbly by Robert Downey Jr. – becomes Iron Man.

“I think because this franchise in particular is so successful because it has characters that people can relate to. Tony Stark is flawed and he is the anti-hero in a way.

“And I think people like that. It’s fun to see these real characters put in these extraordinary situations and it’s incredibly entertaining. And in a way, this movie is not about some fantasy world, these are real characters that relate to each other that have a history and background that is substantial.”

Johansson admits that once she said ‘yes’ to the part, she was rather intimidated at the physical challenge that the role represents, especially because she only had a limited amount of time to prepare. It meant immersing herself in that gruelling training regime and relying on the expert advice of the Iron Man 2 stunt team to guide her. 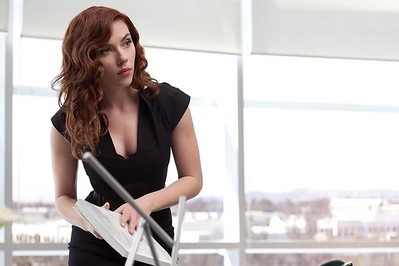 “The physical stuff just took a lot of time and I didn’t really have any,” she says. “I was cast like a month before we started shooting and I went from being a person who hiked occasionally and who wasn’t really that physically active to suddenly spending four hours in stunt training and two hours in the gym and you know, trying to build all this strength in such a short period of time.

“But we had such an incredible stunt team, including Tom Harper, who was absolutely great. I really become like one of the stunt team. I spent so much time with them, in fact I spent more time with them than I did with my own family,” she laughs.

“But I just kind of had to. So I’d say that was the most daunting part of the job because I wanted to be able to sell it. I didn’t want it to be one of those movies that you see where it’s a fight sequence and the actor says their line and turns around and all you see the back of them for the entire fight.

“You want it real. And with this character you wait so long for her to reveal herself that you really want to see her in action and so it was painful but it was worth it in the end.”

Johansson, along with Mickey Rourke who plays Ivan Vanko/ Whiplash, Sam Rockwell as Justin Hammer and Don Cheadle as Col. James ‘Rhodey’ Rhodes/ War Machine, were all newcomers to the Iron Man project.

But Favreau, who started his career in improvisational comedy and is a talented actor himself, sets the tone on his set and is very actor friendly, says Johansson.

“You know the incredible thing about Jon is that as big as the movie was it felt like a really intimate independent production,” she explains. “It never felt like there was a huge pressure to satisfy the budget.

“It was always a very relaxed environment on set and I really attribute that to Jon just being so comfortable in his own skin on the movie set. He’s got an incredibly commanding presence but is very calm and he’s very excited to collaborate and I think that takes the pressure off those high expectations that come with a film like this. 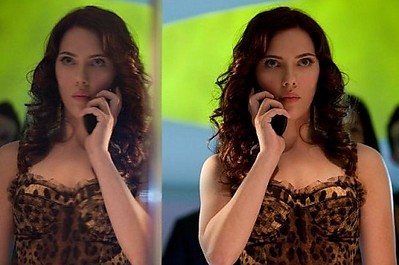 “He is a very reassuring, very calm presence. He’s unique. I’ve never worked with anyone like that before. He’s hilariously funny and of course I attribute his off the cuff humour to his background in improvisational comedy.

“He just loves working with actors and you know I think actors often make incredible directors because they have a certain kind of insight into what goes into building a performance.

“And all of the cast on this film all come from very different backgrounds, we’re different kinds of actors, but we all really thrived on being able to tailor his direction to each one of us.

“And it’s funny, because I was very nervous going in to do it just because there was a lot of physical acting and stunt work and all of that stuff, that I had to land – and playing this kind of cool, confident super heroine!

“But he just made it so much fun for me – it was such a pleasure and a real adventure in a way. I had a wonderful time.”

Favreau and Downey Jr. are keepers of the Iron Man flame, certainly in cinematic terms, and their collaboration set the benchmark, she says.

“They totally work as a team. I think they just know one another so well because they have spent so much time together,” she says. “The pre-production that goes into making these movies is huge and I think they share the same sense of humour and awareness of what works and what doesn’t work as far as the comedic timing and improvisation. 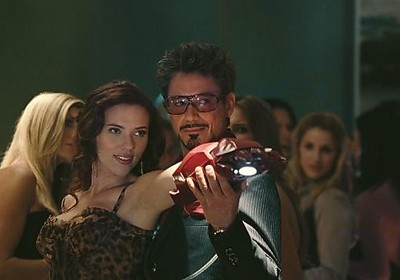 “I think they both have a pretty good bullshit detector, too. Nothing in this movie is fake or trite or corny – the two of them are repulsed by that – and so they work brilliantly together. It’s kind of seamless and it’s great to watch.

“It’s not as if they finish each other’s sentences but they just have such a respect for one another that they just work seamlessly in tandem.”

Johansson says that once she accepted the role she undertook a crash course to educate herself in the history of her own character and how The Black Widow fits into the Marvel Comics universe.

“It wasn’t until I knew that I was playing the Black Widow that I read much on her. I mean, I haven’t really been much of a comic book reader. It’s not that I don’t like comic books when I do read them but they were just never my hobby growing up.

“So the whole Marvel universe is a crazy one,” she laughs. “And it’s very complicated. My character, Black Widow, is really the first female superhero and over the last 50 years or whatever it is, her story has gone in so many different directions.

“You kind of have to take the modern story and pay homage to her origins. And just like Iron Man himself, she has such a complicated background and I kind of like that, but it’s a lot to read through!”

Iron Man 2 starts six months after the first film ended. The world knows that Tony Stark is Iron Man and he’s under intense media scrutiny and political pressure to hand over the design of the suit to the military.

Pepper Potts, Stark’s trusted personal assistant, has been promoted to the CEO of his company and in comes Natalie Rushman to take over her old job.

“She is working for Stark Industries and she is working very closely with Tony,” Johansson explains. “And she’s very demure, very helpful but very mysterious too.

“And then later we see her as the Black Widow and then she’s just all business – she really is. Without totally revealing her whole story, she knows she is part of something bigger. And she sees something in Tony and she knows something about Tony that nobody else knows about him and because of that there’s a real closeness between us.”

Several movies featuring Iron Man and other Marvel Comics characters, including The Black Widow, are in the pipeline and Johansson would be delighted to take on the role again.

“Oh my God, I’d be thrilled to don the cat-suit again if the audience is into it and they love the character. I would love to be able to have the opportunity to explore more of her origin story,” she says.

“I’m a huge fan of Jon’s and Robert’s and I’m a huge fan of the first Iron Man and I hope that it continues on for her and that she is a part of The Avengers. And you know she does have a really interesting origin so who knows?”