The International Silent Film Festival is set to bring together a curated set of silent films which will be accompanied by original live scoring from eclectic musicians and bands from today as a way to infuse their art into black and white films.

Now on its 13th edition, the International Silent Film Festival is set to bring together a curated set of silent films which will be accompanied by original live scoring from eclectic musicians as a way to infuse their art and add new flavors to the black and white classics. 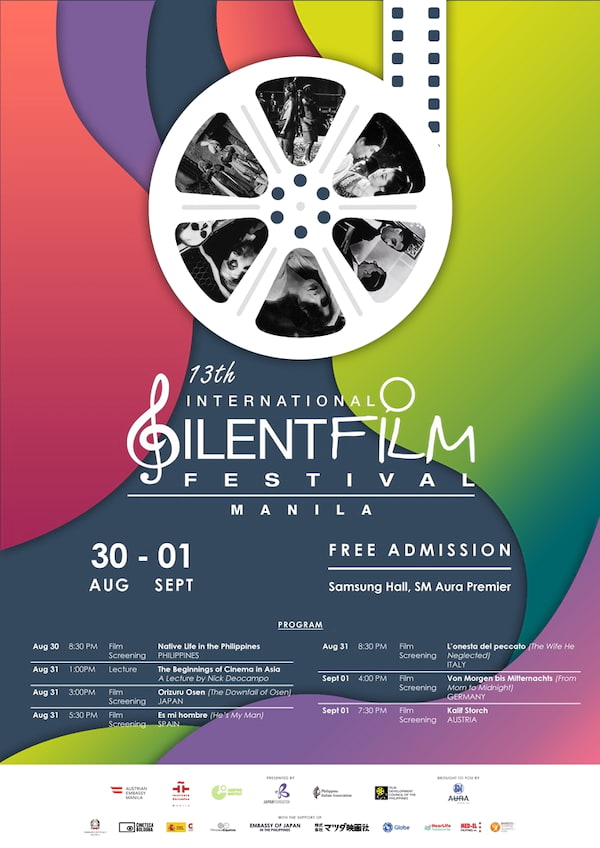 Kicking off this August 30 at the Samsung Hall of SM Aura Premier, the film festival will be running until September 1. The event is organized by the Film Development Council of the Philippines, the Japan Foundation Manila, Instituto Cervantes, Philippine-Italian Association, Goethe Institut Philippinen, and the Embassy of Austria.

To celebrate Philippine cinema's 100th year, professor, author, and film historian Nick Deocampo will also be speaking about the beginnings of Asian cinema in a lecture which is to be held on August 31, 1PM.

Here are the 6 films and bands to catch in this year's festival:

Native Life in the Philippines, 1913
Directed by: Dean Worcester
Screening on: August 30, 8:30PM

Indie band Munimuni, which is known for its "makata pop" sound will be providing the live scoring for the film.

Presented by the Japan Foundation, Manila, The Downfall of Osen is a story about Osen, a servant girl who is forced by her employer to help his illegal business by using her beauty. The film is based on the novel "Baishoki Kamo Nanban" by Kyoka Izumi.

A live scoring by Kaduma Ni Karol, a band which fuses both the modern and traditional sounds, will be accompanying the 90-minute film.

He's My Man centers on Don Antonio, who, despite being down on his luck, must fend for himself and his daughter Leonor. That is until he ends up getting into the oddest and most unexpected jobs.

Manila-based duo Tarsius will be providing the film's live score.

This 89-minute film centers on fragile Maria d'Alconte, whose sacrifices are able to restore order and justice in a world of green and intellectualism.

The musical score of the film will be provided by Italian saxophonist Stef&No and the Pocket Orchestra.

From Goethe Institut, From Morn to Midnight is a film by Karlheinz Martin. It is also based on an Expressionist theater play about a bank teller who steals from a rich old lady.

Anima Tierra, an ensemble who takes inspiration from traditional world music, will be providing the live score for the film.

Ending the festival is Hans Berger's Kalif Storch, a quirky story chronicling the misadventures of Caliph Chasid of Baghdad and his Grand Vizier Mansor after buying magic powder from a wizard.

The film will be live scored by 8-member Filipino rock band Tanya Markova.

All screenings will be open to the public for free and on a first-come, first-served basis.

For more information, you may check out the event's Facebook page.