Oscar-winner Julia Roberts undergoes a romantic and spiritual journey in Columbia Pictures’ Eat Pray Love, based on the bestselling memoir by Elizabeth Gilbert.

In the film, Liz (Roberts) is a modern woman on a quest to marvel at and travel the world while rediscovering and reconnecting with her true inner self. At a crossroads after a divorce, Gilbert takes a year-long sabbatical from her job and uncharacteristically steps out of her comfort zone, risking everything to change her life. In her wondrous and exotic travels, she experiences the simple pleasure of eating in Italy, the power of prayer in India, and, finally and unexpectedly, the inner peace and balance of love in Bali. 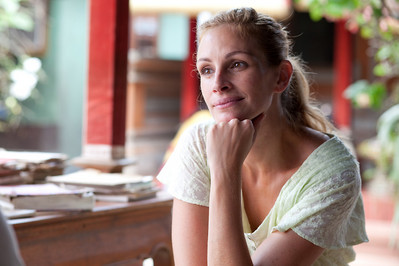 From the very beginning, when producer Dede Gardner first read Elizabeth Gilbert’s inspiring memoir, the only choice to play Liz was Julia Roberts. “It sang out to me as obvious – this should be Julia Roberts,” says the producer. “I have never worked with Julia before and I am just awestruck by her talent. In this role, she runs the gamut in tone, from vulnerability to toughness and from indecision to confidence. She understands when Liz is ebbing and flowing.”

“Liz goes through a wide range of emotions – as you’d expect, because the story covers a year of her life,” says Roberts. “Between going through divorce and dating and traveling and meeting strangers and not knowing what to do, it’s a great opportunity to play a complex and fascinating character.” 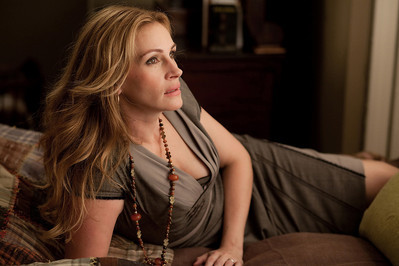 Roberts read Eat Pray Love when it was first released in 2006. She sent it to one of her best friends and they read it at the same time, and both immediately connected with the story. “Everybody has a journey, a moment in their lives when they need to redefine who they are and what they’re looking for,” says Roberts. “Liz’s journey is very specific and very visual, in a way that’s very appealing as a story, but it’s also a universal story that can apply to anybody.

“At the beginning of the movie, Liz is unraveling a bit, and she’s not sure why,” Roberts adds. “She’s a traveler – she’s always traveled – so that was an instinct for her to pack her bags. Obviously, not everybody can do what she did, but it’s not really about that. It’s fun to watch her go around the world in the movie, but it’s really about her own self-examination and figuring out what she wants out of life.” 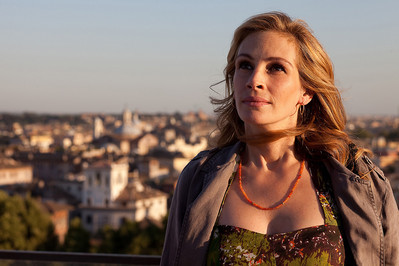 Roberts says that kind of reflection isn’t easy and it’s what makes Gilbert’s journey remarkable. “For her to take that time for herself is what is deeply interesting and encouraging to other people,” she says. “I think that’s courageous and admirable; it’s such a busy, rapid-fire world, so to try to stop and figure out what’s right for you is a good thing.”

Viola Davis, who plays Delia, Liz’s best friend in the film, says that she too saw the connection between Liz Gilbert and Julia Roberts. “As I was reading Eat Pray Love, I thought to myself, Liz probably doesn’t even realize how fantastic she is. She can make friends as soon as she walks in a room. And I feel the same way about Julia – people are attracted to her spirit. She’s a light.”

Roberts had the opportunity to meet the real Elizabeth Gilbert in Rome. “[Director] Ryan Murphy had a relationship with her through pre-production, but I felt it was important for me in portraying her to go with my instincts, to get enough filming done that I was already on a course by the time that I met her,” says Roberts. “She’s a lovely, lovely person, and she has a great way of talking and very specific mannerisms, and I didn’t want to imitate her. She’s a beautiful human being.”