Downey Is A Control-freak Expectant Father In ‘Due Date’

In Warner Bros.’ new comedy, Robert Downey Jr. gets tangled up with a guy he’d rather take a swing at.

In Warner Bros.’ new comedy Due Date, Robert Downey Jr. is Peter Highman, an architect on his way back to L.A. from a business trip in Atlanta. He’s on a tight schedule because his wife is expecting their first child and the date is all set. Everything is fine until he gets tangled up at the airport with a wannabe actor named Ethan Tremblay (Zach Galifianakis) who somehow gets the both of them booted off the plane and grounded for the foreseeable future. 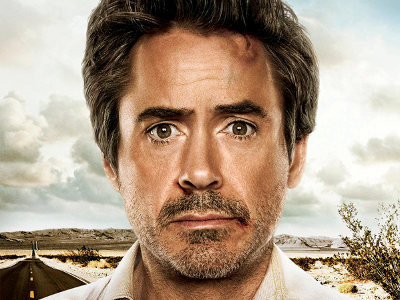 Stranded without cash, credit, ID or time, Peter finds himself in the galling position of having to hitch a ride home with a guy he’d rather take a swing at—Ethan. The person he holds responsible for his predicament in the first place is now behind the wheel of a rental car and offering him the passenger seat.

Though clearly not his best option, it’s Peter’s only option. 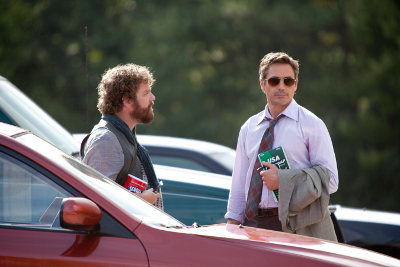 At first grateful for the company, Ethan soon learns that his tightly wound traveling companion is not going to be any fun at 20 Questions, nor generally receptive to the concept of going with the flow. Meanwhile, Peter realizes he’s just joined forces with a guy who can casually ruin his life in more ways than he could ever imagine.
“If there really was somebody like Ethan around, he’d have been strangled in his sleep long ago,” Downey attests. “He’s like a laser beam that focuses on the one thing that will drive you crazy the most, the kind of guy who will eat a whole plate of waffles before mentioning he’s allergic to waffles. I’m sure a lot of people know someone like this, someone who is perfectly wired to activate all of their irritation buttons.”

Granted, Peter has a short fuse to begin with. “He’s kind of an edgy, controlling, judgmental guy with some anger-management issues. And who better to help him explore those issues than Ethan Tremblay? High-strung as he is normally, Peter is now facing the birth of his first child and is thrown into this nightmare, so it’s all amped up,” Downey adds.

Peter may come across like a self-assured, aggressive control freak but, says co-screenwriter Adam Sztykiel, “You sense that his behavior comes from an emotional place and from issues he has yet to work out, that are revealed in the story. Not far beneath the alpha male posture is his own vulnerability and how terrified he is to be responsible for a child.”

“As a parent,” Downey offers, “I know the big question is how are you going to manage and protect something that you have no experience with?”

Playing on that theme were co-screenwriters Alan R. Cohen and Alan Freedland. “Peter’s comfort zone is when he’s in control. And everything that happens in this movie is about losing control; from his inability to get back home to the larger issue of his impending fatherhood—and whether or not he’s ready for it,” Cohen says.
“We wanted to put him into a situation where he had to travel across the country with someone who was effectively a child,” adds Freedland.
Not that it would lessen Peter’s pain, stress and frustration if he knew it might be pain, stress and frustration with a purpose. Still…
“When I read the script, I was moved,” recalls executive producer Susan Downey. “It’s so funny and yet so human. You want a comedy to have that grounding, in the way that you want a drama to have some humor. In ‘Due Date,’ though his experience with Ethan, Peter finds his human side and gets ready for the birth of his own child. It’s about him becoming a man before becoming a father.”