Johnny Depp Plays The Ultimate Ordinary Man In ‘The Tourist’

Johnny Depp is an American tourist in Venice whose playful dalliance with a stranger leads to a web of intrigue, romance and danger.

Johnny Depp is math teacher Frank Tupelo, an American tourist in Venice whose playful dalliance with a stranger (Angelina Jolie) leads to a web of intrigue, romance and danger in Columbia Pictures’ new action thriller The Tourist. 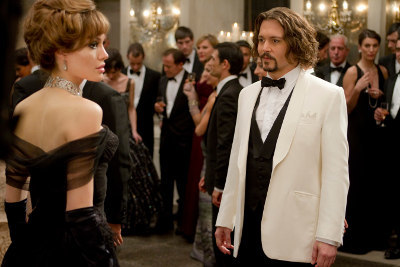 “My main interest was to play the ultimate ordinary man,” says Depp. “The people who are perceived as ‘normal’ are the ones I find the strangest, really: they have tics and flaws and weird mannerisms. Frank is a guy who hasn’t really lived much of a life, so that was the great challenge – to play him as hyper-normal.”
Right after olie signed up for “The Tourist,” the most important step for the filmmakers was to find the right male lead. Says director Florian Henckel von Donnersmarck: “We really needed someone who wouldn’t be eclipsed by Angelina. When we brainstormed over what actor could be a true partner for her in terms of attractiveness, intelligence and acting skill, the only name that kept coming to our minds was Johnny Depp.”
The actor and Oscar®-winning producer Graham King have been friends for years, and, recently, have teamed up on several projects. After wrapping one such collaboration and with an eye toward working together again, King mentioned to him that Donnersmarck and he were looking for a leading man to star in a fun, exciting, sexy thriller opposite Angelina Jolie, and both felt that he would be perfect for the part. 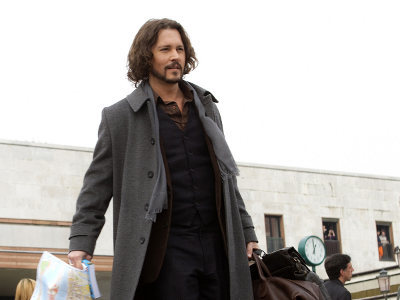 So Donnersmarck and Depp had a meeting and talked about “The Tourist”: “I presented the kind of character I envisioned for him, and he liked it,” says Henckel von Donnersmarck. “Our meeting lasted three hours instead of one, and we laughed so much that I realized I needed to introduce a lot of humor into the script to do justice to Johnny’s charm.”

Depp also enjoyed the opportunity to work with Henckel von Donnersmarck. “Not only is he sweet, humble, giving, caring, loving, clever, and super smart, he was beyond collaborative,” says the actor. “He was very much into the fact that things have to happen organically. He trusted that when Angelina and I got into the ring together, things would take shape.”

Obviously, Jolie and Depp are two of the most engaging, charismatic, and talented actors working in film, but as the film requires its characters to share an immediate attraction to each other, all felt it was a good idea to meet and talk before signing on. And believe it or not, that is how Angelina Jolie and Johnny Depp met for the first time. Despite being two of the biggest movie stars, they had not entered each other’s orbit until they sat down to discuss “The Tourist” with the director and producer. King sat quietly and watched them interact, watching to see how the actors would get along. Perhaps it was no surprise that they clicked from the first moment. “There was complete instant chemistry between them both,” says King.

For Henckel von Donnersmarck, they were the perfect leads for this film. “They’re great movie stars, but more than that, they are great actors, and I wanted to give them roles in which they could really show what they can do. Elise is charming and delicate and feminine and strong, all at the same time; Frank is winning and charming and funny, just like Johnny is in real life.”