Paul Bettany Squares Off With Johnny Depp In ‘The Tourist’

Paul Bettany plays Acheson, the policeman trying to track down the gangster Alexander Pearce in new romantic thriller, 'The Tourist.' 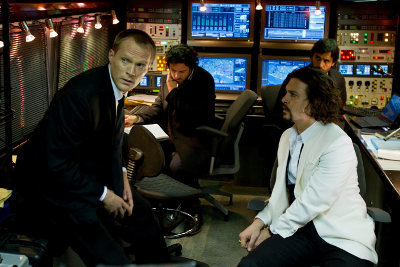 “He’s become obsessed with catching Pearce,” says Bettany of his character. “He’s been trying so long and has been foiled at every turn. But the thing about this movie is that nobody can be taken at face value – not even my character. His investigation is complex and twisted – his motivation is complicated for personal reasons.”
“There are a lot of people looking for Alexander Pearce,” says Jolie. “He’s stolen a lot of money from a gangster. The gangster wants revenge – and his money back – and the British want him for the taxes on the money he stole. Everyone’s looking for him, including my character, Elise, who hasn’t seen him for a long time and isn’t quite sure when he’ll turn up again.” 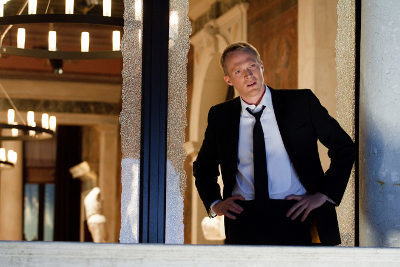 Playing off rumors that he has drastically altered his appearance, Pearce gets word to Elise: get on a certain train for Venice, choose a stranger of approximately Pearce’s height and build, and make everyone else believe that man is Pearce. She chooses the American math teacher Frank Tupelo (Depp), who’s headed to Venice to try to mend a broken heart.

Of his esteemed director, Bettany says, “Florian Henckel von Donnersmarck is exacting, demanding, and specific. There is an enormous amount of detail in his direction. He does it in an entirely charming way, but he will not move on until he has exactly what he wants.”
While the British-born Bettany is a recognized star overseas with well-received performances in film, on the London stage and on British television, worldwide audiences first discovered him in “A Knight’s Tale,” in which he played the comical role of Chaucer opposite Heath Ledger. For this performance he won the London Film Critics’ Award for Best Supporting Actor, and he was named one of Daily Variety’s “Ten to Watch” for 2001.
Bettany next starred as the imaginary roommate opposite Russell Crowe, Ed Harris and Jennifer Connelly in the Academy Award®-winning “A Beautiful Mind” for director Ron Howard. His performance in the film won him the London Film Critics Award for Best British Actor. He then starred opposite Crowe again in “Master & Commander: The Far Side of the World” for director Peter Weir. In this adaptation of Patrick O’Brien’s novel, Bettany plays the ship’s surgeon, Stephen Maturin, the first naturalist and best friend of Captain Jack Aubrey (Crowe).

Subsequently, Bettany went on to star as Silas in the most highly anticipated film of 2006, “The Da Vinci Code” based on Dan Brown’s novel and directed by Ron Howard.
He most recently starred in Screen Gems’ hit “Legion,” and will next be seen in “Priest,” a horror western directed by Scott Stewart, also for Screen Gems.

Opening across the Philippines on Saturday, Jan. 8, “The Tourist” is distributed by Columbia Pictures, local office of Sony Pictures Releasing International.