She's on a roll with "Faster" and "Sucker Punch". 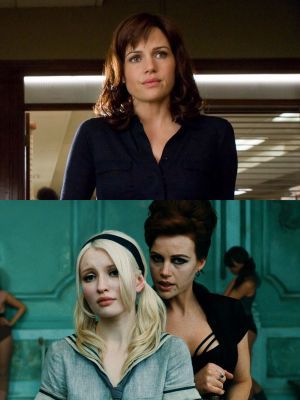 In “Faster,” Gugino plays Cicero, a tough-as-nails, by-the-book homicide detective. She’s baffled when she learns that Cop (Billy Bob Thornton) has been assigned to be her partner on Driver’s (Johnson) case. Cicero is a rising star on the force and has no tolerance for Cop’s antics. 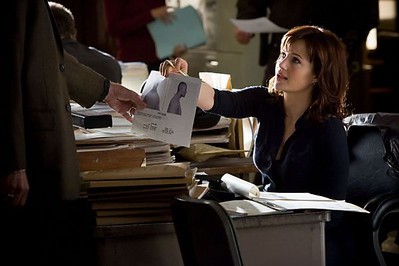 Gugino loved the script’s unexpected twists and turns, and also saw an opportunity to play against a cliché in a particular aspect of Cicero’s dynamic with Cop. “Generally it’s a woman who tries to soften a hardened male cop but in this script Cicero is definitely the one who needs softening – the gender roles are reversed. I really like that flip dynamic.”

Co-star Johnson was ecstatic to learn Gugino signed on to play the role (they previously starred together in “Race To Witch Mountain”). “Like the character of Cicero, Carla is a strong, independent woman. She can easily go toe-to-toe with Billy and still be very sexy.”

“Faster” revolves around Driver, who after 10 years in prison, has a singular focus: to avenge the murder of his brother during the botched bank robbery that led to his imprisonment. Now a free man with a deadly to-do list in hand, he’s finally on his mission…but with two men on his trail – a veteran cop (Thornton) just days from retirement, and a young egocentric hitman (Oliver Jackson-Cohen) with a flair for the art of killing and a newfound worthy opponent. The hunter is also the hunted. It’s a do or die race to the list’s finish as the mystery surrounding his brother’s murder deepens, and new details emerge along the way hinting that Driver’s list may be incomplete.

Gugino will next be seen in the epic action fantasy “Sucker Punch” where she will reunite with “Watchmen” director Zack Snyder. This film centers around a girl who’s institutionalized by her wicked stepfather and retreats into an alternative reality as a coping strategy.

She has been locked away against her will, but Babydoll (Browning) has not lost her will to survive. Determined to fight for her freedom, she urges four other young girls—the outspoken Rocket (Jena Malone), the street-smart Blondie (Vanessa Hudgens), the fiercely loyal Amber (Jamie Chung) and the reluctant Sweet Pea (Abbie Cornish)—to band together and try to escape their terrible fate.

Gugino will play a nurse in the insane asylum who becomes Madam Gorsky, a madam at a brothel in the film’s alternate reality. The film is set to release worldwide March 25.

Opening across the Philippines on March 2, “Faster” is distributed by Columbia Pictures, local office of Sony Pictures Releasing International. Visit http://www.columbiapictures.com.ph for trailers, exclusive content and free downloads. Like us at www.Facebook.com/ColumbiaPicturesPH and join our fan contests.