“She sees everything go off on the radars,” Rodriguez says of her character.. Once the platoon finds itself battling extra-terrestrial forces, “she is one of the first on the scene to track them down and find out what they are and how they tick.”

In the film, there have been documented cases of UFO sightings around the world – Buenos Aires, Seoul, France, Germany, China for years. But in 2011, what were once just sightings will become a terrifying reality when Earth is attacked by unknown forces. As people everywhere watch the world’s great cities fall, Los Angeles becomes the last stand for mankind in a battle no one expected. It’s up to a Marine staff sergeant and his new platoon to draw a line in the sand as they take on an enemy unlike any they’ve ever encountered before. 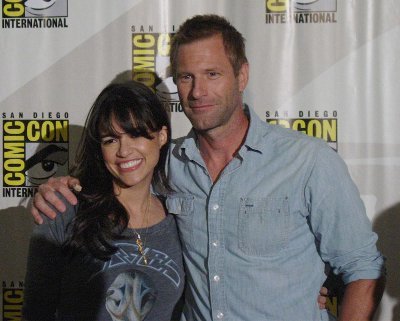 Being Air Force, Rodriguez’s character takes some ribbing from her Marine counterparts. “Marines consider themselves the elite group of all the forces,” she says. And maybe rightfully so: “They feel they train the hardest and they do a lot with the little they have. My character, a tech sergeant, they call her ‘pogue’” – that is, non-infantry, as opposed to themselves, the guys on the front lines, the grunts. But as they continue their way through LA, she will earn the Marines’ respect.

When it came to real life, the shoe was on the other foot, as Rodriguez took naturally to the military training, according to the film’s senior military technical advisor, Jim Dever. “Michelle Rodriguez is incredible. She’s a fine actress and knows herself around weapons. She was always safe with her M4, and she wants to get everything right. It got to the point where I didn’t even have to suggest the way someone might do something in real life – she’d be watching the rear of the formation walk a couple steps, turn around, check, walk – doing it just right without me telling her.”

Rodriguez is a versatile actress known for the ability to combine her “tough girl” physicality with a natural beauty and unforced sex appeal. Rodriguez was last seen in Robert Rodriguez’s “Machete” opposite Danny Trejo and Jessica Alba and James Cameron’s $200 million science fiction epic, “Avatar.”

Opening across the Philippines on March 16, “World Invasion: Battle Los Angeles” is distributed by Columbia Pictures, local office of Sony Pictures Releasing International. Visit http://www.columbiapictures.com.ph for trailers, exclusive content and free downloads. Like us at www.Facebook.com/ColumbiaPicturesPH and join our fan contests.