'Priest' transports us to a dark post-apocalyptic future where a warrior priest embarks on a quest to investigate an attack from the archenemies.

From the fertile imagination of visionary filmmaker Scott Stewart comes a fantasy adventure set in an alternate world in which humans have been battling vampires for ages. Inspired by the Korean manga comic books, Columbia Pictures’ Priest transports us to a dark post-apocalyptic future where a warrior priest (Paul Bettany) decides to abandon the obscurity of his existence, oblivious to the advice of his superiors who believe the hostilities have ended, embarking on a quest to investigate what he believes is a new attack from their long-time archenemies. 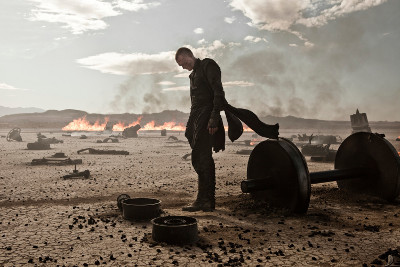 “Paul Bettany was on board first,” says Stewart. “We had such a great time working on “Legion” that there really wasn’t much debate on who should play Priest. Paul enjoys his job and sees it as a blessing, and he understands the process of filmmaking; which is why I think he would also make a great filmmaker, as he is good at telling the story through what he is doing. His character speaks very little, but when he does it is important.” 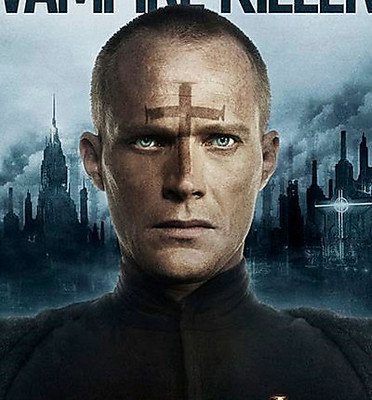 Bettany was excited to work with Stewart again: “I thought the script was already in very good shape when I first read it, but then the drawings I got sent were just spectacular! A film like `Priest’ could go really wrong without the right director, but the amount of love Scott feels for this kind of genre and the ambition to shoot his second movie with his first big budget made him the right man for the job. He poured all of himself and his energy into it. Primarily, as a director, Scott is very visual. He talks absolutely in terms of story -which I like- and he seems to be without ego. So, he has all the spirit and hopes of a young director, but without any of the potential pitfalls. He has worked on movies for a long time as a visual effects guy analyzing shots and knows what everything is going to look like, which is why he has much more experience than you would expect from somebody on his second movie.”

“I loved doing the action too,” recalls Bettany. “It was a lot of fun and very challenging. Also, as I don’t often play the stoic, it’s been nice to be the quiet hero for a change.” Nevertheless, his character is certainly not the average priest. “Our job is not to dispense communion,” chuckles the Bristish actor, “rather to dispense a lot of violence…”

“Paul is very courageous and an incredible professional,” says co-star Karl Urban, who plays the villain Black Hat. “It has been a very physical shoot, with a lot of wirework and stunts. And we have had some tough times! For instance, for a couple of weeks we shot this fight sequence on top of a moving train and on two occasions I injured him pretty badly. He screamed and I thought he was such a good actor, and then I realized that I had really hurt him. I felt terrible… And the second time was when we were rehearsing a fight and I elbowed his lip by mistake.”

“We all had such a great time making this movie,” shares Bettany. “I hope it’s successful so that we get to be together again, and that includes the whole crew because there has been a great camaraderie with everyone in a way that often doesn’t happen. I like the film process to be fun, and on this set I can say there hasn’t been one person that has made it miserable. I would love to be in a sequel!”

Opening across the Philippines on May 11, “Priest” is distributed by Columbia Pictures, local office of Sony Pictures Releasing International. Visit www.sonypictures.com.ph to get the latest movie news, video clips, games and free downloads. Find us on Facebook www.Facebook.com/ColumbiaPicturesPH and join our fan contests.