For Jack Black, returning to the character of Po was a chance to spend more time with one of his most beloved characters.

For Jack Black, returning to the character of Po was a chance to spend more time with one of his most beloved characters. Thanks to Po, Black had the chance to kick off the 2008 Cannes Film Festival (“Kung Fu Panda” was the first film screened), by leading a parade of marchers dressed in panda costumes. 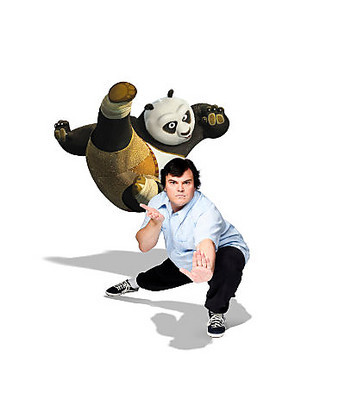 Black recalls another unique opportunity his relationship with Po afforded him: “A few months ago, I got to go to the Atlanta Zoo, and see the latest panda born in captivity…and they named him Po. Wow. I’d say that’s a pretty big deal. He’s not ready for a throw-down yet, but give him time. He’s gonna be one heck of a panda, I just know it.”

Black recalls, “When I finally saw the whole thing put together (Kung Fu Panda) it was one of the proudest moments of my career. It takes many years to make one of these movies – a lot longer than a regular live-action film. There’s much more work that goes into it – story development, artwork, particularly the way the DreamWorks Animation filmmakers work on their films.”
But for the actor, it was also a chance to bring more of his character to light. “Now, Po is having flashbacks of his childhood, before he lived with his father, who’s a goose. So he comes to realize that he’s actually adopted, and he doesn’t know where his birth parents are or what happened to the other pandas. Why did they give him up? So in addition to this being a hero’s journey to save the day, it’s also a journey of self-discovery.”

For even the most casual of observers, it’s evident that Mr. Ping, a noodle-making goose, is not Po’s biological father, but the story does address exactly what makes a parent. Per Black: “Once Po suspects that he’s adopted, he confronts his father, who admits that he found him when he was a baby. But he raised him as his son, and he considers him his son. Po believes that, too, but he still wants some questions answered. And it just so happens that these questions arise at the same time that a new villain, Lord Shen, the peacock, arrives on the scene. Mysterious, no?”

Black, who gained a much deeper appreciation of martial arts due to his involvement with the franchise, admits to practicing kung fu: “Yes, I did some training in kung fu, for both films. It wasn’t just for research purposes, it was also to kind of get in shape. What really drew me is that there’s a combination of exercise and self-defense, along with a third, sort of unseen, component: a spiritual one. When you’re really practicing kung fu, living it and feeling it, there’s a meditative quality that seeps in. It feels almost religious. It’s an art form, really. Oh, well, duh, it’s called martial arts.”